Even before Boris Johnson’s announcement this week, it was clear that we are far away from any kind of “normal”. 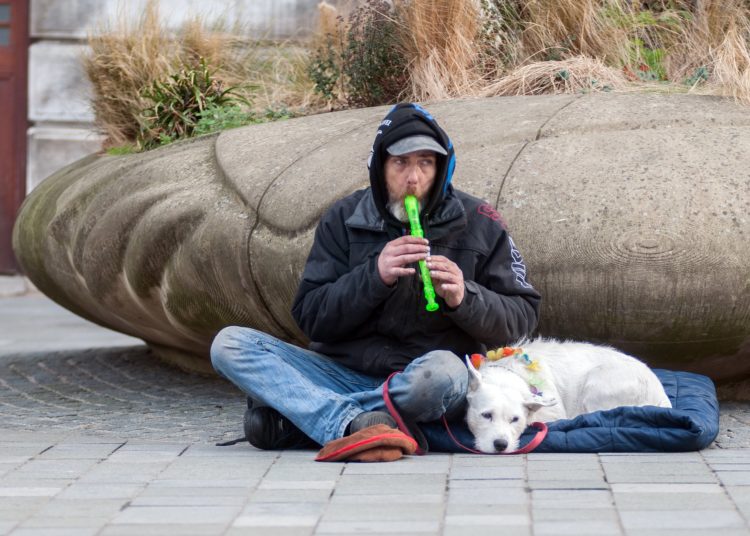 Homeless busker and his dog by Tim Dennell is licensed under CC BY-NC 2.0

Yesterday (Wednesday) the House of Lords debated motions expressing its – and many others’ – grave concern about the plight of many facing the threat of a winter of homelessness, with the Covid-19 emergency eviction ban ended.

It was noted, in the dry, formal terminology of such things, that the legal change “will permit evictions of individuals who have been served a notice of eviction between 23 March and 28 August before Parliament has had an opportunity to debate the impact”. (Expressing procedural concerns is often at the heart of the way the House works.)

The Labour motion was a “regret” motion. And it passed. That’s a rap over the knuckles for the government. There was also a Liberal Democrat “fatal” motion, backed by the Greens, that would have disallowed some of the rules the government has brought in. Unfortunately it did not pass.

The need for an extended programme of protection is obvious. Even before Boris Johnson’s announcement this week, it was clear that we are far away from any kind of “normal”. A lot of people who used to feel secure in their own homes now aren’t, having fallen through the cracks of the government’s rescue packages, as Green MP Caroline Lucas was highlighting this week.

Shelter says 322,000 private renters have fallen into arrears since the virus struck, while district councils estimate half a million households could be in danger of homelessness.

Yesterday’s debate was about the eviction emergency, but this is also a good time to look at the broader picture. We have a profoundly insecure housing model. As in so many other areas, Covid-19 has only exposed pre-existing weaknesses in our society. Houses have been treated primarily as financial assets, rather than secure, genuinely affordable places for people to live.

In 1979, nearing half of the British population lived in council housing – that is, secure housing. Rents were a modest part of most people’s incomes. Then Right to Buy arrived, one of the largest and most damaging privatisations. Now nearly half of the homes purchased under that scheme – in many cases the same homes that existed in 1979 – are owned by private landlords, sometimes landlords with hundreds or even thousands of homes, massively subsidised by housing benefits and tax breaks (even if those have recently been modestly reduced).

Now only 9 percent of households are in council housing, with 10 percent in housing association homes. Those add up to an equal percentage to those in private rental housing – the group that yesterday’s debate was concerned with. That’s 4.6 million households, more than 1 in ten of which, according to the council figures, are insecure in those homes.

And the insecurity is not of course their only worry. We know there’s a huge problem with the quality of all of our housing stock – drafty, cold, badly maintained homes – but it is particularly acute in the private rented sector. Some 25 percent of properties fail to meet the (far from strenuous) Decent Homes Standard. The government has injected a miserly £2bn into a plan to start to address that issue, but we need something on an entirely different scale.

This poor quality extends to homes being built right now, and sold to people who are stretching every financial sinew, extending themselves as far as they can, to secure a stable home that they cannot achieve any other way. They are paying massive sums – in the case of new homes mostly to a handful of private corporations making large profits through Help to Buy (also known as “Help to Profit”) – that was the subject of a critical National Audit Office (NAO) report in 2019.

Back then, the NAO noted that many would immediately lurch into negative equity – something that in the age of Covid-19 looks like even more of a risk. But even before the pandemic struck, we were already seeing an epidemic of homelessness. In my home city of Sheffield, the problem was acutely visible in the city centre. It was obvious too in London.

Now sadly we’re seeing it returning, with the threat of evictions increasing the risk of an exponential growth in homelessness. It’s tempting to think that, in this moment of crisis, we just have to fling patches on the worst problems – tackle the immediate crisis, extend the eviction ban, and extend the furlough scheme. But now is the time for effective planning – just as the UK, in the depths of the Second World War, gave deep, thoughtful planning for the NHS and welfare state that was to be born from the smoking ruins – we need to be thinking now about how we plan for a different housing policy in the future.

And the good news is that this is happening, in places. Next week the all-party parliamentary group for ending homelessness will hold the first of a series of evidence sessions on Housing First, a policy approach that is spreading around the world, promising everybody a stable, secure home, including those with drug, alcohol and mental health issues. That’s instead of the approach we all too often see now, where people are told they can’t have a home until that issue is addressed. Using the Housing First approach has been Green Party policy since 2015, and it is great to see it being promoted more widely – and adopted in Scotland.

The government is finally – belatedly – improving the quality standards for new homes to somewhere near where they need to be, although big issues remain about ensuring the build quality matches the specification – part of the broader issues in the sector so tragically highlighted by the Grenfell fire, and that are affecting many homeowners today.

But we need to think even further, and deeper. This is the age of shocks; we face many environmental, medical, social and economic threats. What our society needs for a solid foundation is more stable, secure, better-quality homes that people can build a life in, in communities than can form, re-form and build together into resilient neighbourhoods.

We need the government to be thinking of that, abandoning Right to Buy and Help to Buy, and moving towards a different model. There’s unfortunately no sign of that.