With fewer than a 100 days until we exit the transition period and fully leave the EU, the twitter chatter today about the likelihood of a deal is frankly not surprising. 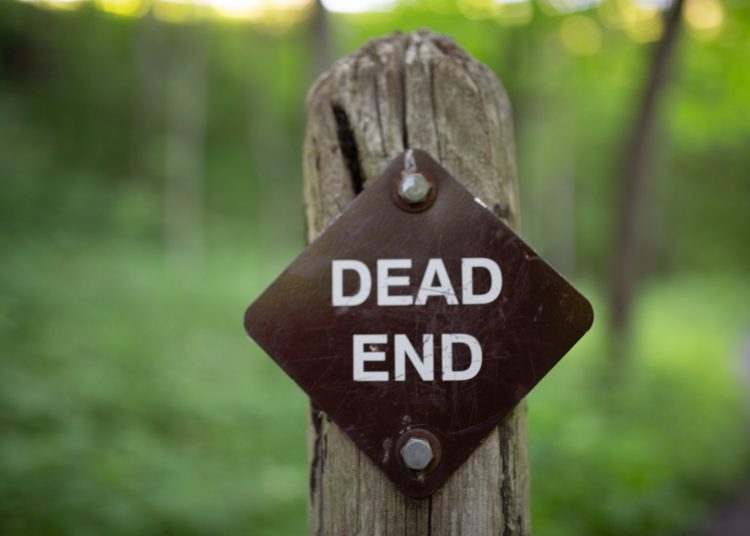 DEAD END by Solen Feyissa is licensed under CC BY-NC 2.0

With fewer than a 100 days until we exit the transition period and fully leave the EU, the twitter chatter today about the likelihood of a deal is frankly not surprising. With the prospect of a second, possibly more deadly, wave of the Covid-19 virus the government may well feel that it can only fight a battle on one front.

But, and it is still a very big but, if the government is softening then this must indicate an acknowledgement that a no-deal Brexit is going to hit the UK economy very hard. It is also quietly an acknowledgement that leaving the transition period without a deal would be a mother of a battle on a second front that no one in their right mind would go looking for.

Confirming the looming disaster, the British Retail Consortium (BRC) announced today that in a no-deal situation, tariffs would add £3.1bn a year to the cost of importing food. Andrew Opie, director of food at the BRC, said “UK consumers have benefitted from great value, quality, and choice of food thanks to our ability to trade tariff free with the EU… There is now the risk of a £3bn tax bill for the food we cannot source here in the UK”.

Chancellor of the Exchequer Rishi Sunak, still the poster boy for the Tories and widely tipped to be the successor to Boris Johnson, is similarly boxed in. The current jobless rate of 4.1 percent is probably artificially low due to the furlough scheme and Sunak was candid enough to admit yesterday that Britain faces a winter of rising unemployment. Announcing his winter economy plan he said that it was, “Not sustainable or affordable to continue to provide the level of support that we did at the beginning of this crisis”. He continued, “It can’t be that we borrow at this level forever; we must get our borrowing back under control and get our debt falling again”. Figures today from the Office for National Statistics make for gloomy reading with over £2tn of public debt confirmed.

Gordon Brown, former Labour prime minister and more elder statesman that poster boy these days, took to the airwaves this morning. He told ITV’s Good Morning Britain, “Look at the costs of unemployment benefit … we spend now to save later… [the chancellor] has to invest now to save later”. Brown has a point. The drag on the economy of possibly seven million unemployed this winter is seismic. But then you are asking a Conservative chancellor to spend their way out of a deep recession – and that is probably a step too far for this government.

If Dominic Cummings is reading his rune stones this morning then he may be sorely tempted to cut and run back to Barnard Castle. Suddenly the man seen as the architect of the Tory majority in the 2019 general election may be running out of road. And a government that has had a relatively easy time by the press and the opposition is now taking a bit of a battering.

The last few days have not been good and the government is suddenly on the back foot. The announcement from Michael Gove that truck drivers will now have a Kent Access Permit to enter Kent from 1 January next year, enforced by the police, was met with derision. Against the prospect of a second dodgy border in the UK of course the real story, as reported in the Guardian, is that key freight IT systems continue to be under development and won’t be ready for public testing until the end of November. Of course, this is not really news because everyone has been shouting from the rooftops about this for months.

The government is increasingly boxing itself in over the legislative timetable. There is still a huge amount of legislation that has not yet been passed – for example the trade, agriculture, environment and finance bills – that needs to be in place for when we formally exit the transition period and fully leave the EU on 1 January next year.

Some of this legislation is proving not just contentious but in fact unnecessary, according to those attending a webinar yesterday entitled ‘The UK Internal Market Bill: A New Brexit Crisis?’ (hosted by the Brexit Civil Society Alliance, the Wales Civil Society Forum on Brexit and the Human Rights Consortiums in Scotland and Northern Ireland). Speakers pulled no punches. This bill, claimed Kevin Hanratty, director or the Human Rights Consortium Northern Ireland, sets us on a constitutional crisis and echoes what’s happening in wider political circles.

It is hard to disagree with him. A lot of the provisions in the bill are set up almost to bring on this constitutional crisis, with any notion of the trust and mutual collaboration that should underpin devolution arrangements going out the window. All the speakers yesterday agreed that the bill goes far beyond what is necessary and represents a serious threat to the devolved nations. The unresolved tensions between the UK government and the devolved nations is something that has been brewing since the 2016 referendum – this bill has just exacerbates that.

Mark Elliot, professor of public law at the University of Cambridge, gave evidence earlier this week to the House of Lords constitution committee on the constitutional issues arising from the internal market bill. In a later blog he explained what he said:

“I argued that the Internal Market Bill undermines the fundamental constitutional principle of the rule of law in two key respects … First, the Bill, if enacted in its current form, would supply Ministers with legal powers to make regulations in breach of the UK’s binding obligations under the EU Withdrawal Agreement and the associated Northern Ireland Protocol … Second, the Bill is incompatible with the rule of law because it appears to attempt to exclude judicial review of ministerial regulations made in breach of the EU Withdrawal Agreement and the Northern Ireland Protocol.”

Given the week the government is having it is hard to understand why it is picking this particular fight. And yet even yesterday it failed to see the hole it was digging. Speaking at the despatch box, Suella Braverman the attorney general said: “Parliamentary supremacy means it is entirely constitutional and proper for parliament to enact legislation, even if it breaches international treaty obligations”. Braverman, as a barrister, must uphold the rule of law without fear or favour and could yet fall foul of the Bar Council.

This now feels like a government not only boxed in but with very few ideas how to punch its way out of the box. Cummings and Johnson have run the country like they ran the Leave campaign and with very few tricks left up their sleeves, they still behave as though governance is a campaign to win, and that there will be an end point. There is no statecraft and there is no governance.

With a second wave of the pandemic looming Johnson and co may have suddenly realised that they can no longer kick the Brexit can down the road; indeed they have run out of road. In the time left there is simply too much to fix. It is plain to see that leaving without a deal would be an unmitigated disaster for the country, but worse still, it is apparent that the government has not even prepared for that eventuality. My guess is a superficial deal will be done, with the government claiming that the EU has conceded and that they have ‘won’.

There are of course no winners in this and no end in sight. Johnson and Cummings may slowly begin to realise that this is grown-up stuff, not a game and not a campaign be won. The price we are all paying for this type of governance will be realised over the years to come.