The question of a Scottish independence referendum. To avoid a constitutional crisis Scotland and Westminster might need to look at Canada and Québec, and the Czech-Slovak velvet divorce? 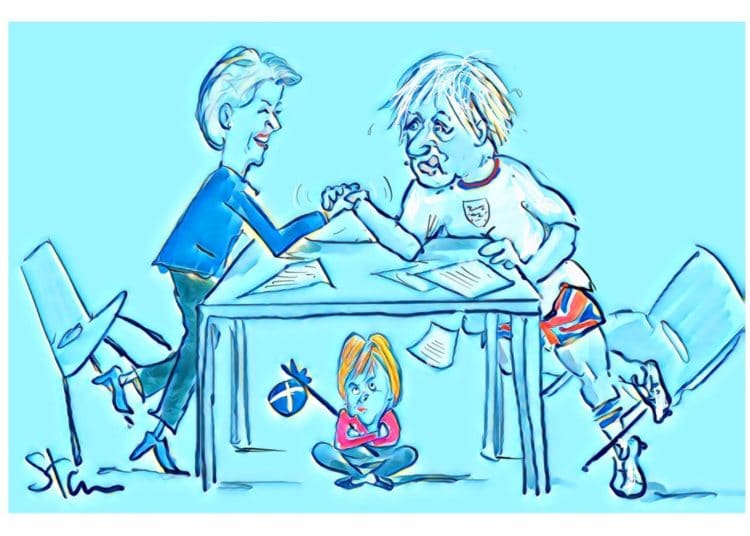 “Is a puzzlement.” The lyrical line from the musical The King and I might foretell what the Westminster and Holyrood governments will be embroiled in over the course of their respective mandates. Most indicators point to a constitutional crisis if Westminster refuses Scotland a Section 30 order and what Scotland calls its “right to choose” is left to the Supreme Court.

However, does it have to be that confrontational? And, will it never end?

Much to the displeasure of many hard-core independence supporters, a request for a Section 30 order may be long off. Speaking at Holyrood on 18 May 2021, after members of the Scottish parliament confirmed her as first minister, Nicola Sturgeon said:

“I want to reiterate the pledge I made in the campaign – as long as is necessary, every ounce of my energy will be on navigating us through the pandemic and keeping the country as safe as possible. Part of that is laying the foundations for the recovery we all want to build.”

Stirring the embers of nationalism

Scottish nationalism could well have cooled after that referendum. If the promises of David Cameron’s devolution-revolution, in his 18 September 2014 “We hear you” speech, were implemented the United Kingdom may have been a little less dis-united.

Could the EU referendum have been the poker that stirred the embers of Scottish nationalism? Being dragged out of the EU partnership with its vast trading markets, the student Erasmus programme, the right to travel and work, agricultural and food safety standards, and other benefits for Scotland, was akin to being a wee bairn in the midst of a bitter and hostile divorce. The 27 family members across the sea offered many opportunities but, against Scotty’s will, Mother England carried the day and retained custody.

Either by House of Commons approval or a decision of the high court, if a referendum is granted one has to ask: what if the result is near the same as, or closer than, 2014? What next? Another Section 30 request? IndyRef3? A surreptitious de-devolution? See you in another 300 years? Or will Westminster and Holyrood become trapped in a time loop – Groundhog Day?

The Canadian experience of sovereignty referendums

Canada confronted two sovereignty referendums – in 1980 and 1995 – both in the francophone province of Québec. The last attempt was initiated by the Parti Québécois government of premier ministre du Québec, Jacques Parizeau. Parizeau did not require permission from Canadian prime minister Jean Chrétien to put a separatist vote before the people of Québec.

The Parti Québécois No forces trailed for much of the seven-week campaign, but two weeks prior to the 30 October vote they moved ahead by a staggering six points. Chrétien promised la belle province a further devolution of powers, a de facto veto on constitutional amendments and — although other provinces opposed — federal parliament recognition of Québec as a distinct society.

Three days before the vote, the polling firm Léger & Léger put the Yes campaign ahead 47:41 percent. On that day, the Great Canadian Unity Rally was held at Place du Canada in downtown Montreal. An estimated 100,000 Canadians from every province in the world’s second largest country came to one spot to peacefully celebrate a united Canada. Speech after speech pleaded with all Québécois to vote No.

On polling day, the dreams of Québec separatists shattered once again. Je me souviens (I remember). The federalist No side prevailed 50.58 percent to 49.42 percent: a razor-thin margin of 1.16 percent.

Today the Coalition Avenir Québec governs Québec, a nationalist party that “wants more autonomy for Québec within Canada, with the objective of full constitutional recognition as a nation.” In Ottawa, the Bloc Québécois advocate separation from Canada. The BQ is the third largest party in the federal parliament.

A controversial legacy from 1995 is the Clarity Act (Bill-C20). Witnessing Canada saved by a mere 1.16 percent margin shocked the foundations of federalism. Based on a 1998 Supreme Court of Canada ruling regarding secession, the Act states a democratic vote has no legal effect until after the province negotiates with the federal government. Also the referendum vote had to be a clear majority. A clear majority has never been defined.

Has anyone heard of Václav Klaus or Vladimír Mečiar? Likely not, but that’s OK. These men were the respective political party leaders of the Czech and Slovak republics of what was then Czechoslovakia. Both participated in the 1989 velvet revolution and knew the Slovakia and Czech republics needed to find their own path. Klaus and Mečiar negotiated a separation of the two republics without presenting the agreement to a referendum, and there were no objections from the military, legislative or judicial sectors.

After partition, borders were kept open, trade was not restricted, business as usual was encouraged, and people moved freely across the border. Citizens were given two years to decide which country they wanted to live in.

The velvet divorce was resolved without acrimony. Eventually both countries were accepted into NATO and the EU.

Scotland: the high road or the low road

Nicola Sturgeon is correct, as any world leader would be – Covid-19 is the first priority, and the economic recovery second. That is Scotland’s correct but difficult high road, even with the impatient independence hard-core people nipping at your heels.

The lyrics from The King and I may well sum up the shape of things to come.