ADVERTISEMENTOn 1 October, the UK2070 Commission published its latest report, ‘Go Big Go Local; a new deal for levelling up the UK’. We can compare the ambitions of this report with the speech of the prime minister at the virtual Conservative Party conference and whether the government shares to any extent at all the idea […] 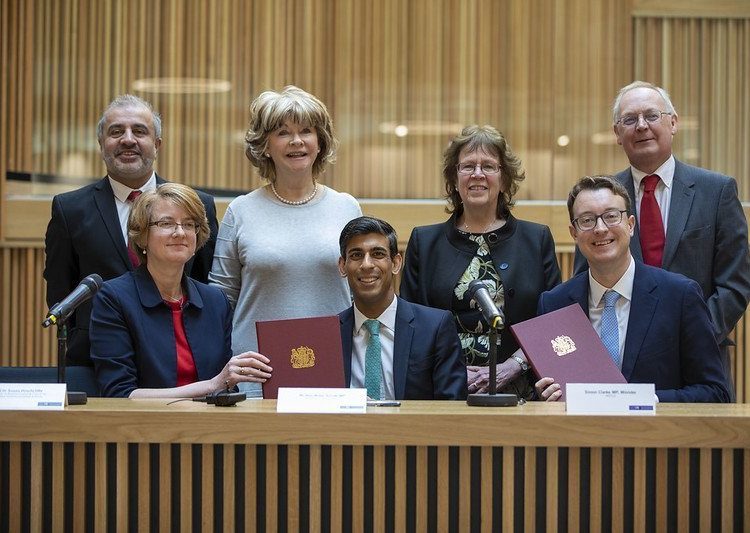 On 1 October, the UK2070 Commission published its latest report, ‘Go Big Go Local; a new deal for levelling up the UK’. We can compare the ambitions of this report with the speech of the prime minister at the virtual Conservative Party conference and whether the government shares to any extent at all the idea that radical measures are needed.

The commission is chaired by Lord Kerslake, the former head of the civil service and chief executive of Sheffield City Council from 1997 to 2008. It is an independent enquiry into UK city/regional inequalities, a partnership of the Lincoln Institute of Land Policy and the universities of Manchester and Sheffield and UCL, working in collaboration with the Royal Society of Arts, Manufactures and Commerce and with programme support from well-known bodies such as the CBI and the National Institute for Economic and Social Research.

The commission gave itself a 50-year timescale for reshaping the UK. This latest report throws down the gauntlet to the government and its “levelling up” agenda. It suggests Covid-19 presents an opportunity to break free from past policies (which it blames for entrenching existing inequalities), and to start on a path towards a genuine rebalancing across the UK.

The ten-point plan and recommendations are certainly radical. Is this too radical by far for the current government, which has centralised power and decision-making to a remarkable degree in less than a year?

The report argues persuasively that if levelling up is to become any sort of reality, different approaches will need to be adopted, with implementation rooted in local dynamism. ‘Going big means going local’ – that means the country needs to change the way decisions are taken. The commission concludes that Covid-19 has reinforced existing patterns of inequality in terms of wealth, ethnicity and gender – impacts have been exacerbated by an over-centralised political system and economic dependency on London’s growth. Not many people in Yorkshire would argue against that one!

It will take at least five years for the UK economy to get back to where it was before the impact of Covid-19 according to the commission, and sustained low economic growth will result in continued regional recession outside London and the South. Regarding the current covid-recovery programmes as short term and not sufficient to deliver the change required, the conclusion is that a dynamic recovery requires higher levels of growth and strong regional development policies. There needs to be national targets for levelling up the most disadvantaged communities in terms of access to good job opportunities and standards of basic services.

There is a radical way forward – the rhetoric of levelling up should be translated into a £375bn, 25-year ‘new deal’ strategy for Just Recovery, to offset:

The commission argues that the UK is the most centralised major developed economy, which inhibits national economic growth. A real transfer of fiscal power to local and devolved governments is urgently required to allow recovery, and the commission recommends a detailed ten-point plan to achieve this. An important part of this – implementing a comprehensive devolution – sees power and funding shifting away from Westminster and Whitehall through a radical programme of devolution, allowing different places to progress through different levels of devolution according to local ambition, need and capacity.

I have focused here on the commission’s recommendations on devolution, as I’ve written previously on the proposal for an executive mayor with a devolved budget for North Yorkshire in 2022 (the associated unitary councils now to be delayed until 2023 and perhaps the mayor too). This would complement the existing South Yorkshire mayor, the one proposed for West Yorkshire from 2021, and a possible one for East Yorkshire. By no stretch of the imagination could the government proposals for executive mayors be compared to genuine devolution of this scale. But if this is all that is on offer, then they have been welcomed, pragmatically as a start down the road to a promised land.

For those of us who visualise a One Yorkshire Together (a coming together as one executive area with devolved budgets and decision-making authority), it is extremely welcome to have such a high-powered body reaching the conclusion that governance structure does matter, that the regional context is real, that a regional dynamism should be unleashed, and that full executive powers must be accompanied by financial autonomy. The government promised a white paper on devolution in the autumn, now rumoured to be shelved – but the chances of it proposing a radical approach such as this are sadly non-existent.

To One Yorkshire advocates, the rationale is succinctly stated and persuasively argued. It points to the importance of local leadership and the need for a full package of powers, meaning changes are needed to the funding of local government. It notes that only 3 percent of subnational revenue is collected by sub-regional government in the UK, compared with 33 percent across OECD countries. Additionally, only 35 percent of action is carried out by these sub-regional bodies, compared with almost 60 percent across the OECD. The levels of sub-regional autonomy in the UK match those of Moldova and Albania.

All of this is linked to inter-regional inequality. Although greater fiscal devolution is challenging, without financial powers, the capabilities and capacities for action will constrain proper devolution. We can all see how the excessive centralisation and exclusion of local knowledge and energy and capability in handling Covid-19 has been a disaster.

As the UK2070 Commission report argues, local delivery of standard national policies needs to be replaced by central support for locally tailored decisions.

The report recommends an Independent Commission to come up with proposals by the autumn of 2021. The prime minister has referred to the building of a New Jerusalem after WW2 – but it took a radical reforming government in 1945 to lead and guide a stricken UK to a better future. The country needs one of equal reforming vision 75 years later; in the crisis of 2020 the country needs to change the way decisions are taken.

John Harris CBE DL is former chief executive of the South Yorkshire Metropolitan County Council. He had a long business career in the private sector and held a number of government non-executive positions in the energy, health and security sectors. Currently he is a trustee of various arts, housing and heritage charities. He is a member of the One Yorkshire committee liaising with the Yorkshire Council Leaders Board.