The UK's media landscape is one already dominated by right-wing oligarchs. 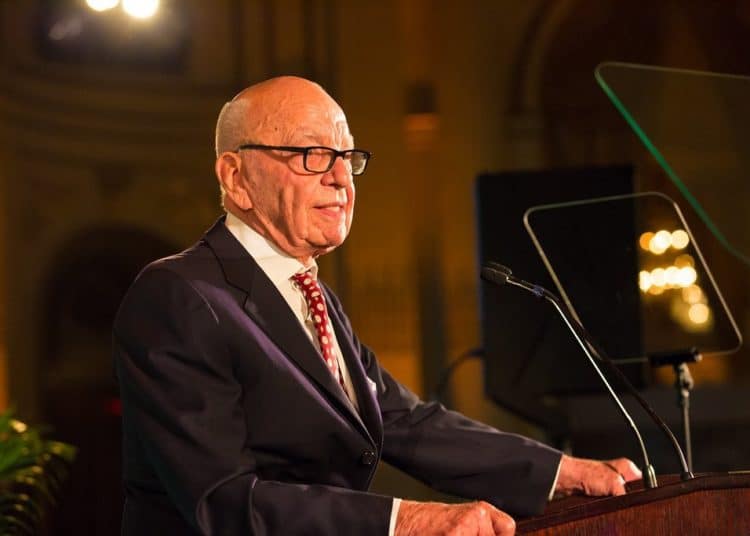 Rupert Murdoch is ensconced in the UK. He is a US citizen but was one of the first to get his vaccine jab in mid-December at a GP surgery near his South Oxfordshire home where he is isolating with his wife, Jerry Hall Murdoch.

In the furore following the mayhem at the Capitol in Washington on 6 January, his mind is now focused elsewhere. Fox News faced a stark choice in the light of President Donald Trump’s defeat and the 6 January storming of the Capitol that followed his – and the network’s – constant lies about election fraud costing him the election.

As the network became more and more enmeshed with Trump over the past four years, several veteran network journalists departed, while current and former employees became increasingly critical of its coverage. After Fox laid off members of its ‘Brain Room’ research department last autumn, Fox staffers told The Daily Beast that the network was acting “more like an extension of this administration, instead of a news network” and compared it to “state TV”.

The news division got into more trouble for reporting the election accurately, first in Arizona and then calling the 2020 election for President-elect Joe Biden. Fox executives blame this for the hostile reaction from viewers and a ratings dip, most dramatically as viewers shift to Newsmax and One America News Network, two other right-wing competitors for Fox viewers.

Murdoch, as executive chair of Fox Corporation, was directly involved in the decision taken on 11 January to reduce news content and go for more right-wing opinion programming to win back viewers.

What has all this got to do with UK broadcasting? Surely the kind of fevered right-wing programming which fosters hatred and division, and is watched by millions of Americans, can’t happen here. Just as we don’t have the overwhelmingly conservative talk radio stations producing more of the same in the US.

Well maybe not yet, but decisions taken by UK broadcasting regulators over the coming months could have unintended consequences. Murdoch, when he had a 40 percent stake in Sky Television, thought the output of Sky News was ‘BBC-lite’ because it was required under UK broadcasting regulation to report news impartially. Now he is pushing for change, along with another contender, GB News.

Domination of the Murdochs, Rothermeres and Barclays

However, there is one important difference between US and UK media. We already have a highly concentrated right-wing press. Three billionaire families – the Murdochs, Rothermeres and Barclays – control an estimated 68 percent of national newspaper circulation. Add to that the holdings of Evening Standard owner Evgeny Lebedev, recently made a peer by the Tories, and just under 75 percent of all national newspapers are controlled by Conservative-supporting billionaires.

These papers practise attack, partisan journalism, the equivalent in print in the UK to what Fox News does in the US. One of the best examples of this is the way they greeted the announcement of two news channels being planned for the UK. One is being driven by Murdoch, seeking to exploit the resources of the four national newspapers and three national commercial radio stations he already owns, although details of his new venture are thin on the ground. We now have a clearer idea about the other, GB News. It acquired a broadcast licence from Ofcom in January 2020 and is owned by the company All Perspectives.

GB News come to the UK

The company is jointly owned by Andrew Cole and Mark Schneider, respectively current and former directors of Liberty Global, which owns Virgin Media. The company’s largest shareholder is the US billionaire and Liberty Global owner John Malone.

In January, it also announced funding from the Dubai-based Legatum Institute. This was described by the Financial Times in 2017 as “one of Britain’s loudest intellectual advocates for a ‘hard’ Brexit”. Founded by the Conservative peer Philippa Stroud (a former special adviser to Iain Duncan Smith when he was secretary of state for work and pensions), it enjoys very close relationships with prominent right-wing Conservatives such as Michael Gove and Steve Baker. It is notoriously loath to disclose the sources of its funding, but, according to DeSmog UK, it received a grant of $77,000 from the Charles Koch Charitable Foundation, which, like other Koch Family Foundations, is heavily involved in climate change denial.

The other major funder announced in January was Sir Paul Marshall, co-founder and director of asset management firm Marshall Wace, one of the biggest hedge funds in Europe and estimated in 2018 to be worth £520m. There is a Legatum connection here too, in that in 2015 he bankrolled their 12-month research programme entitled ‘A Vision for Capitalism’. According to Tim Shipman’s All Out War, Marshall played the key role in persuading the then justice minister, Michael Gove, to betray David Cameron and lead the official campaign to leave the EU, to which he donated £100,000.

He is also co-founder and chair of the ARK Schools academy trust, through which he came to know Gove when he was education minister, and who appointed him to the Department of Education board. He has funded the political website Unherd, which, according to its mission statement, aims “to push back against the herd mentality with new and bold thinking, and to provide a platform for otherwise unheard ideas, people and places”. Judging by many of the articles that it carries, these are precisely the kind of allegedly ‘unheard’ views with which GB News intends to regale us.

Andrew Cole, who sits on the board of Liberty Global, informed his LinkedIn followers that the BBC was “possibly the most biased propaganda machine in the world” and asked them to watch out for “the launch of a completely new TV news channel for the UK – one that will be distinctly different from the out-of-touch incumbents”. GB News has also hired former Sky News executive John McAndrew and appointed Angelos Frangopoulos as chief executive. Frangopolous was the former head of Sky News Australia where he replicated the Fox News formula of rolling news reporting during the day followed by distinctly right-wing punditry in the evening.

The announcements about the new channels were greeted with hoots of glee by the BBC’s many enemies in the national press. For example, the Daily Mail, 29 August, announced that “the race is on to bring a US-style news service to Britain” and quoted an ‘insider’ to the effect that it “will be less Left-wing and less woke than the BBC … Just by taking a centrist line it will seem more to the Right because the others are so much to the Left”.

The following day’s Mail on Sunday quoted a “source close to GB News” as stating that “the channel will be a truly impartial source of news, unlike the woke, wet BBC. It will deliver the facts, not opinion dressed as news”.

It is entirely unsurprising that papers that support the extreme right of the Conservative Party, and someone like Cole who considers the Guardian “a disgusting, extremist rag” and Bloomberg “very suspect” and “almost unreadable”, take this view of the BBC.

But this is exactly the same ideological conjuring trick as played in the US by Fox News, whose claim to be ‘fair and balanced’ depends entirely on the canard that it is providing the ‘balance’ to the ‘left-wing’ news provided by NBC, ABC and CBS. But the simple truth of the matter is that the mainstream broadcast media in the US appear ‘left-wing’ only when viewed from a hard-right conservative perspective.

What impact will this have on the UK media landscape?

The arrival of the new channel raises two vitally important questions. Firstly, will Ofcom relax its regulations on due impartiality (as it has clearly done in the case of talkRADIO) in order to allow the new arrivals to broadcast opinion-driven news of the kind never yet seen in the UK? In this respect, it needs to be remembered that when in 1987 the US Federal Communications Commission suspended the ‘Fairness Doctrine’ this led not to greater freedom of speech and more diversity but to an intensification of the ‘shock jock’ phenomenon on the radio, and, with the consequent arrival of Fox News, a decided shift of the television news agenda to the right.

Second, what will be the impact of the new channels’ news agenda on that of the Public Service Broadcasters (PSBs), and especially the BBC? Consider the following scenario: GB News is sufficiently popular with certain sections of the TV audience to make it commercially successful. As viewing figures grow, either the PSBs decide that there’s profit in populism, and follow suit, or they carry on as before. In the latter case, the terrestrial broadcasters, but particularly the BBC, soon find their news coverage being compared unfavourably with that of GB News, attracting yet more criticism for being overly ‘liberal’ – not only by right-wing newspapers and politicians but now by a right-wing television channel as well. As a defensive move, the PSBs start to shadow the agenda of GB News – and thus, ineluctably, broadcasting in the UK falls prey to exactly the same process of Foxification that Murdoch so successfully initiated in the States and Australia.

Julian is honorary and emeritus professor of journalism at Brunel University London, a member of the editorial board of the British Journalism Review, and principal editor of the Journal of British Cinema and Television. His most recent book is the co-authored Culture Wars: The Media and the British Left and he's currently co-editing with Brian Cathcart a book on the media and the pandemic.