Natalie Bennett writes about the Queen's speech and the House of Lords, looking at the contrast between the representative nature of the Scottish parliament, and the attacks on democracy at Westminster. Ironically, the unelected House of Lords may be the only effective opposition. 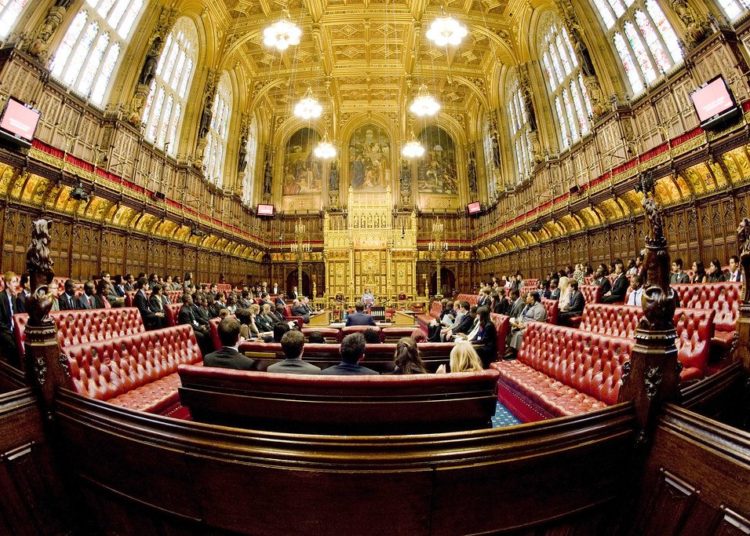 “9 September 2011: The Lord Speaker presides over the CYP in the House of Lords Chamber” by UK Parliament is licensed under CC BY-NC 2.0

There were 937 words in the 2021 Queen’s speech, setting out government plans for 21 new laws in this session of parliament; 45 words per bill.

The House of Lords has five days to chew over that short speech, themed into broad groupings. So on Wednesday I spoke on ‘the economy, health, business and education’. Thursday was ‘the constitution and the union’, with sessions next week on ‘communities, welfare, transport and the environment’, ‘home affairs, justice and culture’ and ‘foreign affairs and defence’.

Green Party representation locally, and in the House of Lords

As I reflected, this was the return of parliament after a spectacular election for the Green Party, with the Scottish Greens increasing their Holyrood representation to eight, in England 99 gains in council seats (many in the largest (county) councils), and with a record level of vote in Wales that just fell agonising just short of our first Senedd seat.

But for the Green group in the House of Lords, the structure of the debate presented a problem. Each peer is only allowed to speak once in the debate, but there are five days. And only two of us. (There are 89 Liberal Democrats, the same party that we finished ahead of in the London mayoral and most other similar races around England).

So in recompense, we’ll be writing, rather than speaking, on the issues of those days when we have no chance to represent in the House all those Green voters – about 11 percent of the total council voters – who’ve just supported us.

A representative parliament in Scotland

Thursday could hardly have been a better day for debating the constitution and union, being the day the new Members of the Scottish Parliament (MSPs) were being sworn in, with the clear pro-independence majority in Holyrood on show. A reminder that Scotland really is a different country, with a very different political culture, was on display, with MSPs making their oaths and affirmations in a variety of languages, local and global. As Green MSP Maggie Chapman, who spoke in the Shona of the land where she was raised, said:

“It is a wonderful thing to celebrate the different heritages of the different parliamentarians and it says something about our openness to the rest of the world as well.”

A further Green landmark was passed, with MSP Alison Johnstone becoming the presiding officer at Holyrood, a role matching that of speaker in Westminster. That’s the first time a Green has fulfilled that role on these islands, and thought to be a world first – a further sign of the growing political maturity of our parties.

The same thing could not be said of the state of the UK constitution, which is not heading towards democracy, openness or effectiveness. Rather, the Queen’s speech set out a range of authoritarian, anti-democratic and damaging measures designed to take the UK (or what’s left of it – with Wales now also being neatly described as “indy curious”) further from anything that could be described as a democracy.

It is certainly not a democracy now, with Boris Johnson wielding 100 percent of the power in the Commons having won the backing of 44 percent of voters and a deliberately awkward, obstructive voter registration system that results in “missing millions”. Instead of measures to tackle these issues, we’re seeing clear, unashamed efforts by the government to repress what little democracy we have now.

Arguably the most egregious is the introduction of voter suppression tactics taken straight from the racist US Republican playbook, in the form of a so-called ‘voter ID’ law. It is being labelled the ‘electoral integrity bill’, in a very 1984 manner. What a bill so-named should actually do at a minimum is bring in automatic voter registration – ideas already well-developed by democracy advocates to ensure everyone has a full chance to participate in elections.

Or even, to institute a modern, functional election system. It is hardly surprising that our current one is such a mess, when women getting the vote was the last significant change in Westminster, a century ago.

Holyrood, as is the case with all the assemblies and parliaments created recently, elected through a proportional system, so that the representation of views in parliament reflects that of the views of the people. It’s hardly a radical idea – and it has produced there what’s been described as the “most diverse parliament yet”, as modern electoral systems tend to.

Also in this tranche of bills is a ‘dissolution and calling of parliament’ bill, which will get rid of the Fixed Terms’ Parliament Act. Not a big deal really, since the latter was never worth even the parchment it was written on. But it represents a further transfer of power to the executive, as does the ‘judicial review’ bill. With that, we’re back to George Orwell again: this is a bill designed to stop the courts defending the law, to prevent the very action after which it is named.

There’s also the planning bill, which aims to overrule local decision-making, particularly on house construction. Although that’s probably the area in which Johnson will find it hardest to hold his Commons line, with defence of the greenbelt being an area of particular interest in many Tory heartlands.

Then an email lands in my inbox announcing that elections for hereditary peers’ slots in the House of Lords will resume (after a covid hiatus). My fellow Green peer Jenny Jones tells me we’ll have votes for some of them – but only those of the “same rank” as us, so the barons but not the dukes or earls. What a system!

There is a plan to abolish the hereditary peer elections, but it doesn’t come from the government, rather from the indefatigable Lord Grocott, who’s happily landed highly in the private members’ bill ballot. So there is a small hope of modest progress.

The House of Lords is likely to continue in rebellious mode in this new session of parliament – demonstrating the only effective political opposition in Westminster. It’s quite a constitution that produces an unelected House more representative of the views of the country than the elected one.