The opposition needs a clear message on Brexit, and a more robust critique of the government's pandemic failures. 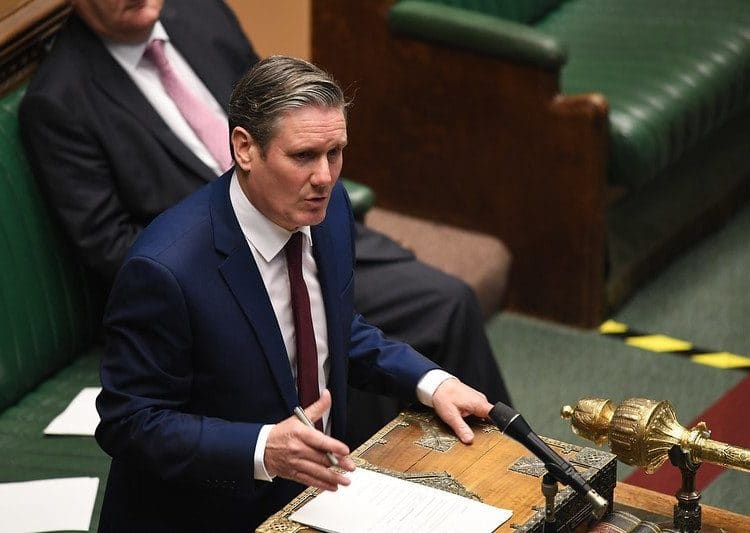 British politics is in a strange state of limbo. We are a little over 100 days into the kind of hard Brexit always predicted to take a sledgehammer to the economy, destabilise the peace process in Northern Ireland and stoke separatist tendencies in Wales, Scotland and English regions, to say nothing of harming security cooperation with our neighbours and our global reputation.

It is doing all this and more and the government’s pandemic response has been just as bad.

Opposition to a failing government

Boris Johnson has led us to one of the world’s worst public health outcomes and one of the worst economic impacts. Billions have been wasted on a test and trace system never fit for purpose. Government ministers have awarded contracts to their friends and family. Chancellor Sunak has supported some workers but left millions without support, needlessly endangering thousands of businesses and millions of jobs.

Johnson’s failures affect more than the UK. He is making a habit of attempting to disregard international law, following autumn’s law-breaking internal market bill with the unilateral suspension of parts of the Northern Ireland protocol. He is endangering wider peace by investing in more nuclear warheads while the rest of the world tries to find ways to prevent their proliferation.

Despite all this, the Conservatives remain ahead in the polls, by between 8 and 14 percent depending on which poll you believe. The Conservatives are more trusted than Labour to manage the economy, foreign affairs and the coronavirus crisis, and to handle crime and immigration.

Some 48 percent of people believe that the Conservatives are capable of winning the next election, as opposed to only 20 percent who disagree.

In news which will mystify Johnson’s opponents, 85 percent of voters believe they have seen enough to judge his character, but despite being so well informed a full 48 percent of people believe him ‘a likeable figure’. Only 40 percent disagree.

What Johnson gets right

The Conservatives’ continued success in the polls seems to defy political gravity. By almost any objective measure, the government is a disaster – a toxic combination of corruption, disinterest in outcomes and badly designed policy.

But clearly, Johnson and the government are getting something right.

Their polling success is partly built on the vaccine rollout, where the UK is undeniably doing well. The vaccine bounce will fade as the pandemic continues to cause health and economic problems, particularly as furlough support is withdrawn.

But their success is not all down to the vaccine. Johnson and his team may be incredibly bad at responding to the pandemic and addressing Britain’s long-term challenges of inequality, child poverty, productivity and the need to transition to a green industrial economy. But they are all too good at setting and controlling the narrative, a skill that gives them a crucial advantage.

The Conservative election campaign of 2019 was a masterclass in political campaigning. They did not rely on Get Brexit Done alone, attractive as that was to a country long bored of the Brexit wars. Their pledge to level up, evidenced by defined targets to build new hospitals and recruit new nurses and police officers, was equally popular with voters.

With the exception of Brexit, Johnson may have no intention of fulfilling his pledges, but to him it hardly matters. They did their job of persuading enough voters in enough places to vote when it counted.

The Conservatives’ other success has been to respond to the changed voter landscape that exists post referendum. While values have always motivated voting intention, since 2016 the social liberal to social authoritarian divide has been as important in determining voting intention as the traditional left to right economic spectrum.

While the Conservatives have largely united the social authoritarian vote, Labour have failed to do the same with the already smaller socially liberal group. This alone has done much to help the Conservatives keep power.

Labour and the pandemic

Labour face criticism for not doing more to hold the government to account over its pandemic response and Brexit impacts. In one of his first acts as leader, Starmer pledged to work constructively with Johnson “in the national interest” instead of providing “opposition for opposition’s sake”.

The generous intent is clear, but critics argue that Starmer has helped Johnson escape public understanding or anger for his pandemic failures. More could have been done, they argue, to raise awareness of government failures and the comparative success of other nations in Europe and beyond.

Perhaps Starmer could have done more, but the media has largely followed his lead. Media focus in the pandemic has been incredibly parochial. If international comparisons have been made at all they have looked little further than across the Channel, first to marvel at how well Germany did last year, then to comment on how much better our vaccination programme is than the Europeans’.

What Starmer and the media have both missed is the opportunity to compare our response with New Zealand, Australia, Vietnam and the host of countries, largely in Asia, that have experienced tiny fractions of the deaths seen here.

The tactics used by these nations were known a year ago. By mid-March 2020, Taiwan successfully had the pandemic under control using techniques it developed during the SARS outbreak of 2003. South Korea was testing thousands and ensuring that hospitals could manage all cases. We could have followed South Korea’s example.

Instead we ignored Italy’s warning not to replicate their mistakes. We have lived the consequences. Too many have died.

Labour, Brexit and the values divide

Starmer has been similarly quiet on Brexit despite growing evidence of the harm it is doing to the country’s economy, security, reputation and unity.

Some in Labour fear that to speak out would hamper its ability to recover ground among the socially authoritarian voters it needs to win back seats lost in 2019. The result is that the government is left unchallenged. An important political space is left vacant.

Consequently it is easier for the government to pursue a range of devices intended to deny the existence of any downsides, or else avoid blame for them.

The danger for Labour is that it risks repeating the mistake it made in the 2010–2015 parliament. Then leader Ed Miliband failed to attack the Cameron government over austerity, despite the evident harm it was doing to the economic recovery and the public realm.

By 2014 Miliband was committed to keeping austerity should he win the subsequent election, a stance that failed both to inspire his own voters and to win voters from the Conservatives. If everyone agreed that austerity was the right policy, voters decided to stick with the real thing.

Labour could be repeating the mistake with Brexit. It is an issue not only owned by the Conservatives, it is all but personified by Johnson. He led the Leave campaign. He Got Brexit Done. If Brexit is seen as a success he will reap the rewards. If it is seen to fail, he will take the blame.

It makes little sense then for Labour to accept Brexit. Labour and Starmer are in truth well aware of Brexit’s deficiencies. They may have voted for Johnson’s Brexit deal last December, but the nine amendments they posted made clear that they were apprised of its failures and the need to plug its serious shortcomings, if the UK’s economy, security and trade are to be secure.

A poll in February found that half of all voters want a closer relationship with the EU. Only 24 percent were satisfied with the deal, and only then with the important caveat that it was the best deal for the “foreseeable future”.

Labour’s danger is that it will miss its moment. Some argue that it is waiting until the pandemic has passed, but with the frequent arrival of new variants and the government’s continued failure to control transmission, that may be some time.

Others argue that the public need to see the damage first before Labour can speak, but this first leaves the job to a media that has repeatedly proven itself ill equipped to understand or communicate Brexit impacts, and second abdicates Labour’s role as lead opposition party.

If Labour is not careful it will come to the next election with the Johnson Brexit narrative intact. He will blame economic harms on the pandemic, Northern Ireland unrest on the EU and continued agitation for Scottish independence on Nicola Sturgeon.

In that context, Labour will get little thanks for belatedly accepting Brexit. All the accolades will belong to the man who created it, while the true story of the deep and lasting harm it is causing to our economy, trade and security will be left untold.

How Labour can turn the tide

Labour must find a better way of navigating what is undoubtedly challenging terrain. To win it must unite its socially liberal voter base, make progress against the SNP in Scotland, and bridge across to socially authoritarian voters. Yet by failing to speak out against Brexit impacts and the government’s pandemic failures, it risks alienating social liberals and Scots, while doing little to attract social authoritarians.

Political sociologist Paula Surridge argues that Labour can take courage from the fact that the economic divide remains important. Labour’s policies on tax, public services and an active state are popular among voters. Labour needs to make clear its critique of government failures and propose specific policies that voters will both believe and value.

She argues too that Labour cannot ignore the values divide, which is now at least as important as economics in determining voting intention, believing that Labour has more room for manoeuvre than it realises. The values divide, she argues, is often seen as binary but is in reality a spectrum.

It should be possible for Labour to unite the socially liberal vote while bridging across to the values centre ground. It can never be more authoritarian or nationalistic than the Conservatives, and nor should it try.

The task of uniting a strong economic offer with a values message that keeps liberals onside while bridging to the values centre ground is Labour’s job of this parliament. It is hard to imagine either task being accomplished without a clear message on Brexit, or continued and more robust critique of pandemic failures.