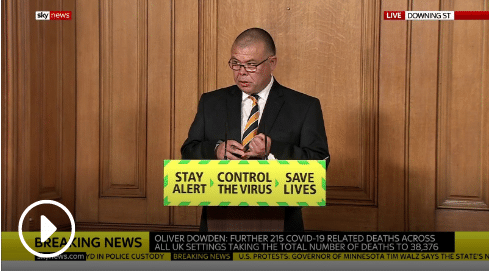 The daily coronavirus briefing has morphed into a propaganda show, with the government now using every opportunity to trail a good news story to distract us from the reality of their incompetence. Saturday night’s show was no exception and the culture secretary Oliver Dowden warmed our hearts by announcing that a third of all remaining Premier League matches would be available free to view. Hooray!

So it seems the government is no longer following the science. It is intent on pursuing the policy of slowly reopening the country, despite the daily number of Covid-19 infections and deaths remaining worryingly high. A further 215 deaths were announced yesterday, bringing the official total to 38,376. Elsewhere in Europe where lockdown measures are being eased, the figures are markedly lower, as illustrated in this tweet from Ian J Green, a journalist from West Yorkshire:

In a continuation of the Twitter thread, Mr Green highlights the figures for excess deaths in the UK. In this, we truly are ‘world beating’ (unlike our track and trace system which appears to have fallen at the first hurdle). We have recorded almost 60,000 excess deaths this year to date, an increase of 21 per cent when compared with the five-year average for this time of year. Edwin Hayward, another commentator on Twitter, pointed out that globally there are three basic ways to approach the pandemic:

With an R number hovering just below 1 – based on figures from almost two weeks ago – the government has adopted a risky strategy. The scientists who produce these figures caution that these national estimates come with a wide margin of uncertainty. If the figure starts to go over 1, then this shows that each infected person is infecting at least one more person, a statistic that will mean we’re already in wave two.

So far, three members of the government’s scientific advisory group for emergencies (SAGE) have warned that we are not yet ready to ease lockdown restrictions. Professor John Edmunds and Sir Jeremy Farrar said ministers were taking risks by gradually reopening shops and schools etc. They stressed that the government’s track and trace system should be fully functional before we consider reopening. Last night, England’s deputy chief medical officer Professor Van-Tam warned that Britain was at a “very dangerous moment” and urged Britons not to “tear the pants out of it”.

The independent sage group has issued even stronger warnings, stating categorically that schools should not be reopening on Monday. This team of scientists is chaired by the government’s former chief scientific officer Sir David King. On Thursday they published their final report on schools reopening and said the government was failing to follow the advice of its scientists, saying “It is not safe enough for all schools to re-open on June 1.”

The group also warned that the government was undermining its own messaging, leaving people confused as to what is and is not currently permitted. This follows the row over rule breaking by Boris Johnson’s special adviser Dominic Cummings. This has dominated the headlines for the last week, with over a million people signing a petition demanding that he be sacked. The prime minister is keen to stress we should all “move on” from this incident; the country looks determined to do anything but.

Yesterday, it emerged that Durham Police face a possible inquiry into their handling of the Cummings case. The force has received a number of complaints from members of the public after they concluded that Cummings only committed a “minor breach” of the rules. The complaints are currently being handled by the force’s professional standards department where a decision will be made about further action. A spokesperson for the Independent Office of Police Conduct (IOPC) confirmed that the force had not referred the matter to them for investigation.

When asked about Cummings’ actions at the Saturday night briefing, Prof Van-Tam was unequivocal in his response and drew widespread praise on Twitter. This Tweet from NHS Million sums up the public mood:

At times like these we need proper leaders. Thank goodness for the men and women of integrity and courage out there who are still fighting to save us, not just save the economy and their puppet-masters.