Beanna Olding reports on the efforts by the organisers of the 2016 anti-Trump Women's March to survey global feminists. 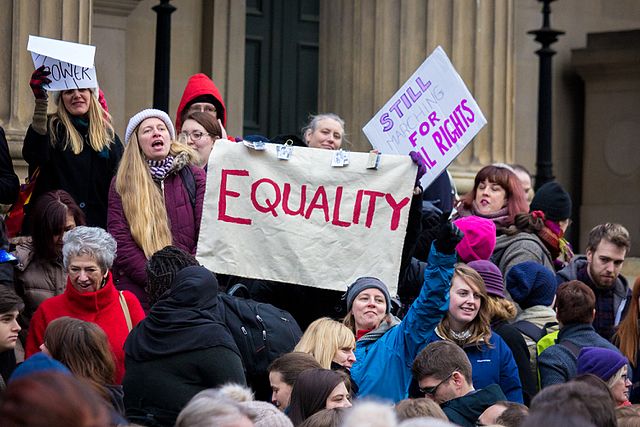 For the past five years, women all across the globe have come together on 21 January to march against the enduring patriarchy and its ensnaring implications. With a startling spike in gender-based violence and a clear division between the health rights of white women and women of colour in the UK, a women’s march this year feels more important than ever. In fact, human rights authorities have revealed that gender-based violence and workplace inequalities in 2020 were as bad as they were 25 years ago.

When asked why this may be the case, PR manager at Women’s March Global, Wallis Grant, said:

“Although awareness is growing on gender issues, in many countries across the world, we are yet to see this awareness turned into action. And given the rippling effects of the pandemic, we are losing the progress we have made on achieving equality for women and gender-diverse people. As we build back from Covid-19, we must be placing women at the heart of any recovery and there is no better way to do that than by having their collective voices counted”.

Covid-19 has highlighted inequalities between men and women, between white women and women of colour, between able-bodied women and disabled women – essentially, the past year has reminded us that the gap between the privileged and the underprivileged is still frighteningly large. There is a pressing necessity to raise up the voices of all women right now, those of marginalised communities in particular. That’s why this year Women’s March Global will be holding a “Global Count”.

In light of the pandemic, the Women’s March Global will not be going forth in all its usual grandeur this year. Instead, the team has constructed a survey to collect data about the cultural and socio-economic obstacles women all over the world are facing today. This impressive survey, aiming to reach thousands all across the globe, could be one of the largest intersectional data collections on the cultural, economic, and social challenges encountered by women.

Uma Mishra-Newbery, board member of Women’s March Global, said: “Data around these key issues on a global and local level is scarce. Yet, it is vitally needed, not only for movements, but local collectives, funding institutions and the non-profit sector at large. The data collected from Global Count will be shared across these spaces and will put power directly in the hands of the people who take the survey”.

It is expected that such obstacles will vary from region to region, but that the rise of gender-based violence and the impacts of economic fallout will be a recurring theme.

Women’s March Global was formed four years ago in the midst of the protests against Donald Trump’s presidency, when thousands of women across the globe came together in anger and anguish. In the years since, their campaigns have included ‘End Family Separation’, ‘Stand with Kashmir’, and ‘End Slavery’. Alongside the ‘Global Count’, their two other ongoing campaigns are ‘16 Days of Action to end Violence Against Women’ and ‘Free Saudi Activists’.

In order to reach as many communities as possible, some areas will use community volunteers to distribute printed surveys, which will be uploaded to the system later on. The survey will also be translated into 15 different languages.

The 2021 Global Count survey is being circulated by world-leading survey provider SurveyMonkey, and Facebook, and will run from today (usually a day of street activism) until 8 March (International Women’s Day). Influencers from around the globe will be mobilised to promote the campaign with the hashtag #WeCount, and participants will be encouraged to share their involvement via their networks. The steering committee behind the campaign includes an impressive assembly of renowned organisations: Cooperative for Assistance and Relief Everywhere, Inc. (CARE), Young Feminist Fund (FRIDA), White Ribbon Alliance, CIVICUS, Girl Up, and Global Fund for Women.

“Women’s March Global has taken strides to show that the people of the world are stronger when uniting in collective action. The 2021 Global Count gives people a say in the many issues they confront on a daily basis. And while we may not be able to march in person this year, we can still speak as part of a global movement. I urge all people, across all continents, to have their voices counted in this one-of-a-kind survey”.