George Galloway's divisive campaign in Batley and Spen is likely to cause damage across the board, and the electorate will suffer 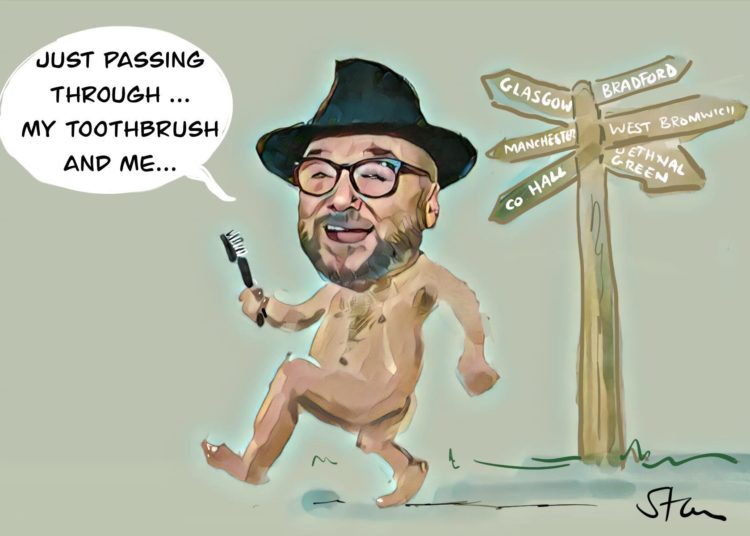 The M62 was blocked, so I had to make a detour. It took me past the spot where Jo Cox was murdered in 2016. You then queue past the Shackleton’s chair factory (“My niece bought it for me, you know”) and then you’re in Batley. Or maybe it’s Dewsbury. I’ve lived round here all my life and still don’t know where one ends and the other starts.

Yesterday, though, you were in no doubt: everywhere you went, one face was evident. On large, cripplingly expensive full-colour banners was George Galloway. Hat at a jaunty angle, promising all sorts of stuff that have nothing to do with a local MP, all of which aimed straight at the previously Labour-voting Muslim community that has been here for nigh-on 60 years.

Galloway’s done this several times before

Galloway’s got form for this. He took Bradford West in a by-election under the banner of the Respect Party, going heavy on anti-war, pro-Gaza, pro-Kashmir rhetoric. And he spreads the love, having also been an MP in Glasgow Hillhead, then Bethnal Green and Bow, as well as standing as a mayoral candidate in London, and an independent candidate for Manchester Gorton in 2017 and West Bromwich East in 2019.

He comes, he goes. He sucks up Labour votes in a divisive manner then leaves. When he was MP for Bradford West, students in a local high school were encouraged to develop their political education by making contact with all the local MPs.

George Galloway never replied to any of their emails. Other local MPs, of different parties, were very generous with their time. Gerry Sutcliffe, in particular, used to pop in regularly and listen to students. As for George Galloway. Zip. Nada. Not even an acknowledgement.

Where he’s consistent is sniffing out opportunities to split the Labour vote. Galloway’s not a happy bunny when it comes to Labour, having been kicked out of the party in 2003 for bringing the party into disrepute.

A cash-rich campaign for Galloway

It was with this in mind that I marvelled at the ubiquity of Galloway’s smiling features. Then a practical notion hit me: how much must all this cost? I’ve been on the doorstep myself and one of the least-popular jobs after an election is collecting in all the Corex boards (cost approx £11 each) that attach to lampposts.

A quick bit of research reveals that the lowest quote for the smaller banners is around £200. Add to this that the sites themselves will have cost hundreds each, any advertiser using such methods will be looking at £500-£1,000 per banner, depending on size.

Our jaunt round a 200m square section of Batley town centre found nine. The town has dozens more (with a heavy focus on the Muslim communities). And that’s not including the Corex boards on every third lamppost.

So who’s paying for this?

As for who’s paying, well Galloway has a couple of nice earners making programmes for Russia Today, (prop. V Putin),and he’s also a popular figure in media, so the money might come out of his own pocket, but a question still needs to be asked as to whether his largesse is within the rules and who’s paying.

The fact that it’s a by-election is significant. In general elections or council elections, parties often get round the local limit by producing a ‘national’ template leaflet or poster which can be paid for by the national party as part of a national campaign. But in by-elections and with one-man-band parties (it’s The Workers Party for Galloway this year), it’s a different story.

Some of the mystery as to how Galloway is funded can be answered by digging into Galloway’s crowdfunder, which has so far raised over £8,800. Many of the donors are anonymous, as is often the case with these platforms, but the comments underneath are telling:

Former Labour: “I donated because I want to see George forever banish the worthless Labour Party from the majestic hills of Batley and Spen! All power to the Workers Party! Labour Out! Galloway for President!”

Peter Lyons: “Good luck with the campaign. Give the boot to those who only look after the wealthy classes, who don’t oppose oppressive legislation and torture, who put wealth before health, who support Zionist genocide! #StarmerOut #JohnsonOut”

John Sibbald: “I want to destroy that zionist bastard starmer.”

Galloway’s donors match his campaign literature, which is more focused on getting rid of Keir Starmer than representing the people of Batley and Spen.

A look at Galloway’s finances

As an MP, Galloway was noted for his absenteeism. According to the Guardian he was unrepentant about spending so much time promoting his media career around the world – parliamentary records show in 2014 he earned almost £300,000 on top of his £67,000 MP’s salary, working for Russian, Iranian and Lebanese TV.

A look at his register of interest shows that in his last two years in parliament alone, Galloway was paid £80,850 by the media company he owns, Molucca Media Ltd.

Galloway’s numerous charities have frequently been under investigation by the Charity Commission, which even went as far as to appoint an interim director of one of them, Viva Palestina, due to concerns over their financial management. A further investigation by the Charities Commission found that there was no evidence that Viva Palestina had delivered any actual aid, despite receiving £1m in donations.

And back in 2017, The Times reported on the fact that Galloway had paid his wife £84,000 from the funds of a charity he started – the Mariam Appeal.

Playing politics at the expense of the electorate

How Galloway won Bradford West is not a secret. He’s a canny operator playing on fears, tribal politics and general discontent. In the Batley and Spen by-election he’s trying to capitalise on dissatisfaction with Labour party generally and Keir Starmer in particular. He’s likely to do damage across the board, not just to the Labour vote.

The ones in the end who suffer are the electorate. They deserve an MP who is there for the duration and who will live, work, eat and sleep Batley. That’s not Galloway. Galloway is just interested in Galloway.