From the Thursday evening clap-for-careers, rainbows in the windows, taking the knee, or toppling statues – the political battlefield in Britain is by some being turned into a cultural war in which image takes precedence over substance. 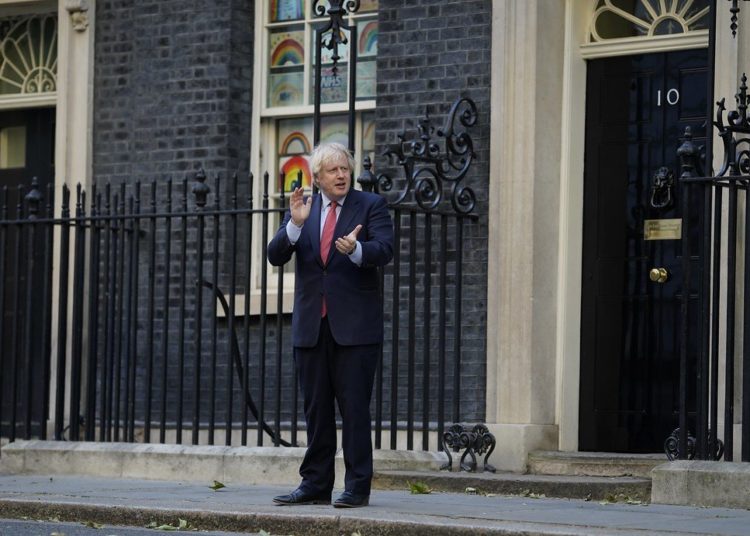 Symbols are the cultural and political currency of the day. From the Thursday evening clap-for-careers, rainbows in the windows, taking the knee, or toppling statues – the political battlefield in Britain is by some being turned into a cultural war in which image takes precedence over substance.

Symbols are important, they allow us to represent ideas in recognisable and digestible ways, they help the spread and proliferation of causes and movements, they can inspire change and remind us of the sacrifices made so that we could enjoy our privileges today. Symbols can transmit complex concepts and histories in effective ways and bring them to the attention of the masses. Our societies would probably not function without the use of symbolism; metaphors and imagery are essential to the way humanity functions and understands itself in complicated networks and communities.

I am not wishing to undermine the power of symbolism, or to even judge the rightness or wrongness of such displays in the present, but merely to say that symbols must not be used as a substitute for substance. We should not allow them to be hijacked and used as if the real political disagreements of our time must take place purely in the realm of symbols. This unfortunately is what I believe to be happening currently in the UK.

Perhaps the greatest example of political symbolism in Britain is the annual poppy wearing. Different people wear the poppy for slightly different reasons, but I think we all agree on it as a symbol and reminder of all those who lost their lives in battle. Also, given that proceeds of the poppies go to the Royal British Legion, which dedicates itself to helping military members, veterans and their family, we can also say that we wear it to show that we care about veterans and their families. It is what the poppy symbolises, these things just mentioned, that we really care about isn’t it, and not the plastic and paper item we wear on our lapels?

To not wear a poppy as a public figure every November is to commit political suicide. It’s no overstatement to say that a politician could get voted out on this alone. But if a poppy-wearing politician votes against a bill that might help war veterans, or they vote to send our soldiers to an unjustified war, they are unlikely to have put their job at risk. It seems as if we have grown to care more about whether someone wears a poppy, and what colour that poppy is, than we care about what any of it actually means or represents in material terms. Herein lies the great British problem – we have become more interested in a cultural war of symbols, and in doing so have completely neglected the very causes we claim to care about so much.

Now more than ever, in the political climate of Covid-19 and Black Lives Matter, do we see the cultural battle come to its fullest and most toxic. Claps, badges and even monuments – these are all things being given and promised to the care workers of our country instead of pay-rises and adequate personal protective equipment. With rainbows in our windows we thank those who risk their lives to protect us, but time and time again at the ballot box we have failed them. We’ve been far too easy on our rulers when it comes to any material improvements in our healthcare systems.

When the statue of the prolific slave trader Edward Colston was thrown into Bristol Harbour, those big names in the print and TV media quickly made sure to shift the narrative from a discussion on racial inequality in the UK and Britain’s history, to one about the etiquette of statue-removal and talk of historical erasure.

Those who did not want to have meaningful discourse on systemic racism in the UK, those who benefit from the status quo, quickly weaponised the statue-toppling into a cultural war on the apparent distastefulness of mob-rule (also known in Latin as democracy), diverting attention away from what the statue and its toppling represented.

What is perhaps most worrying is how quickly this powerful, collective political action was reduced to a cultural war that has gone both ways, so to speak. Not only are those who stand against Black Lives Matter turning it into an issue of cultural capital as a way to undermine the movement, but those who either support it or at least believe themselves to be acting in its interest, are also undermining it by being symbolically performative. For example, since the statue was taken down we have seen a nationwide initiative to remove similar statues – something to be applauded – but it seems for some that the removal of statues have taken precedence over, or even completely replaced the need to tackle systemic racism in the UK.

We have seen TV shows removed from streaming services and certain voice actors stepping down from voicing characters of different ethnicities. All these things are probably good, but ask those at the centre of the Black Lives Matters movement and they’ll tell you that these issues are probably at the bottom of their list. In fact there are those, and I’d include myself in this, that believes these kinds of actions are published in papers in a cynical attempt to undermine the Black Lives Matter movement and to create antagonisms.

It gives the impression that all the Black Lives Matter movement wants to do is ‘censor’ TV and take down shows like Little Britain – making their demands seem somewhat pedantic (again, I don’t necessarily agree with these sentiments, but this is how some have seemed to react) – when this of course is not the overall aim of the movement at all. We, or at least those who write the headlines, are cheapening politics and cheapening causes for justice.

The philosopher Walter Benjamin called this idea ‘political aestheticism’. Benjamin saw the process of political aestheticism as one which sought to turn politics from an arena of important concepts and power struggles, to just a spectacle of aesthetic taste. Our political world has become dominated by competing symbols and we’ve become completely distracted from the power structures which shape our lives, either privileging or oppressing us. Benjamin claimed that this kind of society “allows the masses to express themselves without seeing their rights recognized.” In other words, by reducing the political sphere in which we operate to only expressing outrage or sympathy with that which we find distasteful or tasteful respectively, we feel as though we are given a political voice. We feel that despite unchanging material conditions, we have political power. In convincing us of this, those in power get to keep it.

As long as we continue to fight on just a surface level, as long as our political expressions only exist in the forms of claps or pins in our sweatshirts, nothing will change. The way power operates and its ownership remains unchanged when we fight amongst ourselves over the etiquette and sensibilities around how we show appreciation to care workers and veterans, or how we should go about taking down certain statues. Symbols play an important role in our political world, but they only do so when supported by material change. Taking down statues is powerful when it triggers real change within a society, when it ignites meaningful discussion about our past and how we move forward. On the other hand, when the man in the most powerful office in the country substitutes clapping for any concrete action, that symbol becomes not only redundant, but harmful.