Jane Thomas analyses Keir Starmer's latest speech and a change of tone from the leader of the opposition. 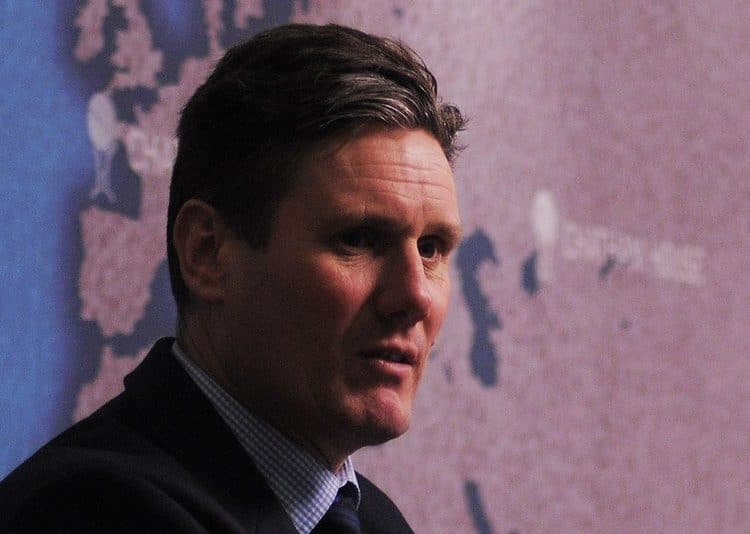 Possibly bruised after a negative reaction to his performance on Marr yesterday, it was a bolder and more combative Keir Starmer that took to his podium today to outline part of the Labour package for the New Year.

In an obvious pitch to show Labour would be throwing its arms around families – especially those that need the most help, and are most vulnerable to recent economic impacts – this was more competent as well as combative.

In all fairness, there’s some ‘low hanging fruit’ with the government’s current track record on dealing with the pandemic. Today, as the chief medical officer warned us that we were entering dangerous times, the New York Times reported that Britain has the highest number of Covid-19 deaths in Europe.

The mixed messaging throughout the last nine months has been a problem for the government – but then, so too has the failure to act fast enough. The issue of decisiveness is increasingly an Achilles’ heel for Boris Johnson – and as Starmer said today:

“Even in the best of times, you can’t be indecisive in government. In the worst of times, indecision can be fatal. Every time there’s a big decision to make, Boris Johnson gets there too late”.

The litany of ‘too-lates’ or ‘too-slows’ is too long. Too slow to lockdown last March; too slow to protect care homes; too slow to get PPE to the right places; too late on heeding warnings of a second wave, or the need for a circuit breaker; and far, far too late on this most recent national lockdown. Little wonder that the most recent poll from Opinium finds that 43 percent think Johnson should resign, while 40 percent said that he should remain as leader. The poll for the Observer, published yesterday, shows a drop in support for the government’s handling of the pandemic, with some 72 percent saying they thought the government has not acted fast enough – up four points from the last poll.

But today’s speech by Starmer was more than just having a pop at the government’s (in)competency with the virus – it was the start of drawing the lines for the next general election. Picking what can only be described as more low hanging fruit, the Labour leader said:

“We’re in the worst recession for 300 years. Yet the prime minister and the chancellor want to hike council tax – a £1.9bn bombshell that lands a bill of around £90 on every family”.

Controversially, the government also intends to cut universal credit, which will put another 200,000 children into poverty according to Starmer. This is much more terra firma for party members – and for those who are still struggling with the Labour leader’s position on all things Brexit – especially freedom of movement. Preventing council tax rises, stopping cuts to universal credit, extending the ban on evictions and repossessions, and giving key workers a pay rise is something that you can build a credible manifesto around.

And there are some good lines with this too … “This is the government that gave Dominic Cummings a £40,000 pay rise, but won’t pay our carers a decent wage”.

We are still at least three years off a general election. Much can change in that time and Labour have a huge task ahead of them to overturn a comfortable 80-seat majority. So far, the travel of direction is pointing the right way.

The most recent, and extensive poll, the Focaldata MRP poll for the Sunday Times, published 2 January, showed that no single party would win a general election if one was held right now. This form of polling – multilevel regression and post stratification – is believed to be more accurate than others, as it takes account of things like respondents’ age, gender, education, voting habits, population density, and employment status, as well as details of their neighbourhood.

It is not the 20 percentage point lead some in the Labour Party want. But it is unnerving many Tories, especially those in the Northern red wall seats – seats that many believe were won on ‘getting Brexit done, and Jeremy Corbyn done in’. Corbyn has come and gone, and we have left the EU, although few would make the bold claim that all that is now behind us. But it does leave opportunities for clear new battle lines in these key seats. And that’s exactly where Starmer was making an early and obvious pitch this morning and who could blame him.

This poll was also fairly comprehensive by sample size, with some 22,000 people surveyed between 4 December and 29 December 2020. In Yorkshire it predicts that Labour would get back Keighley, Dewsbury and Wakefield comfortably, with Don Valley, Pudsey and Rother Valley returning to the Labour stable too, but with much smaller margins. It also shows Boris Johnson losing his own seat – although some pundits have him giving it up before it gives him up.

It’s a tough gig being the leader of the opposition during a national crisis, when so much is about coming together. There is an expectation of some sort of national unity – but there is also immense frustration if that impedes the ability to vent the frustration many feel with this government. We desperately need someone to articulate that. And Starmer made quite a good fist of that today.

But there is a long way to go. Starmer is right – in 2021 we need to write a new chapter, and we do need to build back better. But in the meantime we need to protect the most vulnerable and have a viable exit strategy for the awfulness that currently envelopes the country. And we need clarity. The mixed and confused messaging has to stop.

And for those who voted remain – and I am one of them – we have to stop framing everything around Brexit. Yes, public opinion may well yet turn overwhelmingly against Brexit, and that may be sooner than we think, but it’s not just yet and at the moment it’s perhaps not the conversation to be had in those red wall seats. At some stage, and much sooner than we realise, the heady mix of Brexit and the pandemic will collide. Let’s hope our politicians are ready.