Dominic Cummings is forced out of Downing Street after a furious row involving the Boris Johnson's partner Carrie Symonds. 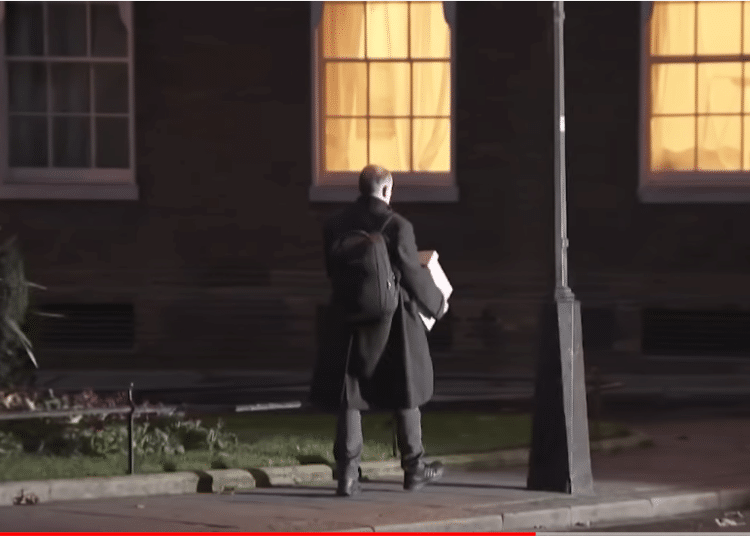 Dominic Cummings, the prime minister’s senior adviser and Downing Street’s very own Zaphod Beeblebrox, from the Hitchhiker’s Guide to the Galaxy (“If there’s anything more important than my ego around, I want it caught and shot now”), left the building on Friday, apparently never to return. He cut a forlorn figure carrying only a cardboard box to remind him of his 16 arrogant months in No 10.

Tory MPs welcomed Cummings’ going, with one accusing him of presiding over a “ramshackle operation”, which is true but I’m amazed they hadn’t noticed until now.

Winning the referendum with a series of simple but mendacious slogans made him believe he was a genius. Unfortunately, there is a gulf between campaigning in fiction and governing in fact, and he couldn’t manage the world as it actually is. Everything he touched turned out badly with a succession of debacles signposting the way to what is about to happen with Brexit. Apart from successfully sloganising three-word lies, Cummings failed at almost everything else he touched.

His sudden departure raises more questions about Johnson’s already questionable judgment. He and Gove sought him out, recruited him, defended him, empowered him and trusted him. What does it say about the two most powerful men in Britain?

The “shapeshifting creep” – a term used by Barack Obama’s former National Security spokesperson – Tommy Vietor, took five years to see through Cummings, when an honest person could have done it in five minutes. I suppose when you have no convictions about anything and a lifelong problem distinguishing between lies and truth, it’s not that easy. Johnson himself is no slouch when it comes to conning people and I imagine he found it difficult to believe he was being outconned by his own senior adviser.

The FT has all the juicy intrigue about a “tense” 45-minute meeting, the newspaper’s comprehensive account of which is disputed by Cummings’ supporters:

However, since both sides are habitual, compulsive and congenital liars we will probably never know the truth.

Could an extra reason for his abrupt departure, and that of his erstwhile friend and colleague Lee Cain, perhaps be the result of Johnson realising that when Brexit goes horribly wrong – as it will do unless Britain shows a lot more flexibility – sending its architect out into the rose garden to defend the disaster will not be an option? Leaving the EU with a deal will be bad enough, without one would be catastrophic.

It is known that Cummings favoured a scorched-earth, take-no-prisoners approach to the EU future relationship negotiations, even if it meant there was no relationship and possibly not even a future. Brussels can be grateful the career psychopath wasn’t handed any nuclear codes.

Someone might have explained to the prime minister that he, and not Cummings, will be facing the music and explaining in January why supermarket shelves are empty and the endless line of portaloos – running the length of the M20 – are full, perhaps overflowing.

What does it all mean for Brexit? Who knows? But, buried inside the weekend accounts of last week’s bruising confrontation, was a reference to the talks in Tim Shipman’s piece for the Sunday Times:

“Lord Frost, the chief Brexit negotiator, met Johnson at 10pm that night [Wednesday] to seek and win assurances from Johnson that he would not weaken his negotiating position. That did not stop people in Cummings’s orbit briefing that Brexit was in danger if he was allowed to go.”

There were rumours flying around at the time that Frost himself might resign over Cain and Cummings. And it seems the UK’s chief negotiator is not quite the impartial civil servant that Ollie Robbins, Mrs May’s negotiator was. It’s hard to imagine Michel Barnier seeking assurances from the European Council that the EU mandate will not be weakened.

Regardless of what is said in public, bear in mind that we are now a month beyond Johnson’s last ‘final’ deadline, with not a whisper about walking away.

Also, Lord Frost would do well to ask himself what an assurance from Boris Johnson is actually worth. The PM is seen by many, including Andrew Rawnsley at The Observer, to have a tendency to agree with the last person who spoke to him, lending credence to the “shapeshifter” jibe. It means a huge amount of power is wielded by whoever is the last ‘last person’ to see him and why Cummings, who was usually that person, was so influential.

No 10 is saying that the relationship between Johnson and Cummings “went off a cliff” yesterday. Let us hope that Frost and Gove avoid the same fate for the rest of us in January.

If you haven’t read the account of Grant Shapps’ SPAD about his time working under Cummings, try to overcome your natural and understandable aversion to anything connected with the Daily Mail and click HERE.

Beyond the headlines: education in England post-lockdown