Dr Pam Jarvis writes about covid and children with the reopening of schools; most under 16-year-olds are still unvaccinated. There has been a lack of government planning for the Covid-19 strategy in winter, presenting a heightened risk of more deaths in younger people. 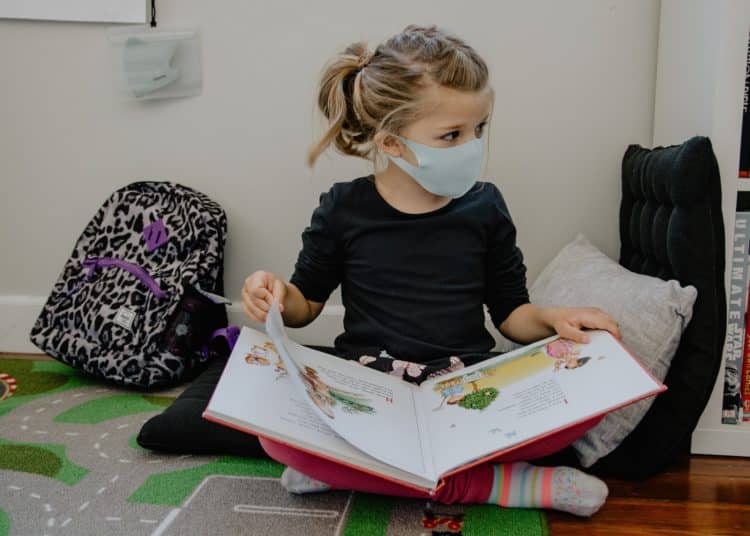 Image of a child reading with a mask, image by Kelly Sikkema for Unsplash

Schools return next week for most children in the UK, with the vast majority of under 16s still unvaccinated, and with fewer mitigations in place than last term. In Scotland, schools have already returned, and covid case numbers are steadily climbing. We know that the Delta variant of Covid-19 – the predominant variant in the UK – is more than twice as contagious as previous variants, and can cause more severe illness, including in children. If the pandemic follows the same process amongst the unvaccinated as it did last year, autumn term 2021 may hold some unpleasant surprises.

In the US, where schools in some states have already returned, information is emerging about the hospitalisation of unvaccinated children that is becoming quite worrying. Unicef states:

“The Delta variant does not specifically target children. There are increased rates of infection across all age groups. However, the Delta variant is more contagious than other strains and people who are mixing socially and those who are unvaccinated are more susceptible to contracting the Delta variant.”

This has clear relevance to unvaccinated children returning to the classroom, and to the assembly hall; as such the current DFE advice seems highly over-optimistic:

“We no longer recommend that it is necessary to keep children in consistent groups (‘bubbles’). This means that bubbles will not need to be used for any summer provision (for example, summer schools) or in schools from the autumn term.

“As well as enabling flexibility in curriculum delivery, this means that assemblies can resume, and you no longer need to make alternative arrangements to avoid mixing at lunch.”

Yorkshire Bylines has run a series of articles exploring many aspects of children and covid. We have looked at potential innovations that could result in education being less disrupted by the pandemic; the problems of ‘gaslighting’ parents and teachers about matters of health and safety; the chaos caused by panicked, knee-jerk responses to information; and the problems that result from problems that result from cherry-picking scientific data to support purely political strategies.

The government’s baffling insistence that children can only be taught by being lectured at by teachers in cramped, stuffy classrooms has also been explored. This all boils down to putting the political cart before the human needs horse.

Lack of planning for autumn and winter

Although it’s too early to provide definitive data on a rise in covid infections in Scottish children, following their return to school in mid-August, epidemiologist Deepti Gurdasani provides some initial analysis. In a Twitter thread, she comments:

“The lack of planning for autumn and winter is shocking. It’s very clear that school openings will only make this worse given there’s very little to stop spread in schools & a lot to encourage it. Our govt is herding us into disaster.”

Unvaccinated under-16s will be returning to school to mix freely in large cohorts, during a time in which the pandemic is still ongoing. The spread among a 75 percent fully vaccinated adult population has made it less visible. But what makes the government believe that the result of removing all covid regulations in schools will not be the rapid spread of covid amongst an unvaccinated pupil population at the same, or a faster, rate than the unvaccinated general population in early Spring 2020, which led to a death rate of 924.09 per million?

There’s no suggestion that there will be death rates amongst children to mirror those amongst adults over 2020 and early 2021. However, evidence suggests that children can become very ill with the Delta variant, much more so than was the case with the Alpha variant that circulated in 2020. There’s also the known/unknown of long covid waiting in the wings. This was discussed at an all-party parliamentary group session in early July.

So, what are the government’s plans for September?

In terms of what they have done, this seems to boil down to a bulletin released on 21 August, proposing that schools will be issued with CO2 monitors to indicate where ventilation in rooms have reached problematic levels. There have been no further instructions issued to head teachers on what they are to do if and when this happens, or money for strategies for alternative activities in outdoor environments as I suggested in July 2020, and which Scandinavian nations very quickly put in place over a year ago.

We have seen Johnson’s government lurch from crisis to crisis, underpinned by lack of leadership and cronyism since it was elected in 2019. This time it is different – it is our children on the line. The question for Boris Johnson is: are your ministers’ plans for the September return to school really good enough? And if they’re not, what are you going to do about it?

As Nelson Mandela once said, “There can be no keener revelation of a society’s soul than the way in which it treats its children”. The Johnson government is about to be tested on this point. Given what’s at stake, let us hope it is not going to be found wanting on this issue, as it has been on so many others.