What are the prospects for Scotland to re-join the EU? How difficult would it be? Graham Avery discusses the benefits and consequences 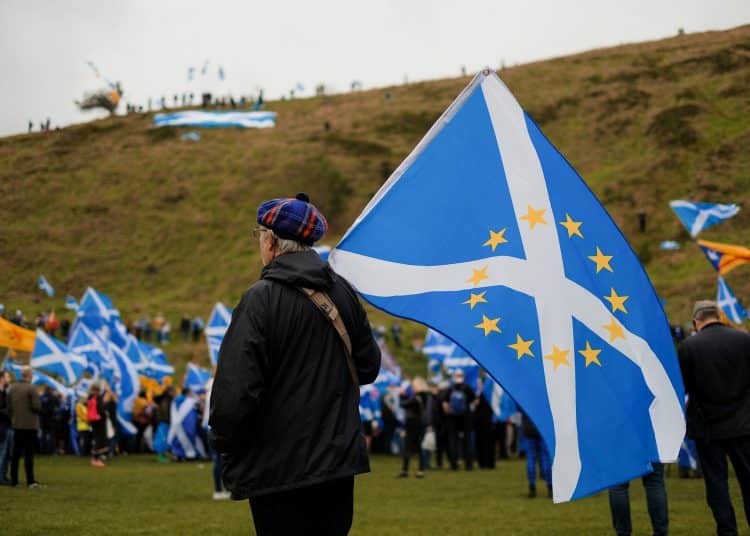 Photo by Adam Wilson on Unsplash

If Scotland holds a referendum and votes for independence, three questions present themselves. Firstly, how long would it take for an independent Scotland to re-join the European Union? Secondly, what would be discussed in Scotland’s negotiations with Brussels? And finally, what would be the economic and political consequences for Scotland of re-joining the EU?

In the Scottish independence debate in 2014, these questions generated more heat than light. President of the European Commission Barroso said on BBC TV that it would be “extremely difficult, if not impossible” for Scotland to join the EU.

That was just plain wrong. Since then, a lot has happened, and we need to consider what has changed.

Joining the EU: the process

When it comes to joining the EU, I know what I’m talking about. In the 1970s, I was a member of the team in London that negotiated Britain’s accession. Later, in the European Commission in the 1990s, I was one of the architects of the enlargement of the EU from 12 to 15 members, and from 15 to 27. I also had a hand in writing the ‘Copenhagen criteria’, which the EU uses to judge prospective members.

We don’t know when the British government might agree to a Scottish independence referendum. As of now, it seems to be saying that it couldn’t be in the lifetime of the present parliament (not before May 2024). On this, I make two comments:

Joining the EU: the time frame

The record for joining the EU is held by Finland, which took two years and nine months from its application to its accession. Scotland has the advantage in that it will have applied the EU’s rules for 50 years – in that sense, it would be the best qualified applicant the EU ever had.

On the other hand, Finland has been an independent state for 100 years, while Scotland would be newly independent, and would need to create a number of new institutions such as a national bank and a foreign ministry.

Negotiations could begin soon after an application for membership, since it’s clear that Scotland satisfies the Copenhagen criteria (democracy, rule of law, human rights, functioning market economy, capacity to cope with membership), So let’s say three to four years for Scotland to join, from application to accession.

Scotland re-joining the EU: the negotiations

In Scotland’s negotiations with Brussels not much should need to be discussed. The standard terms of membership are: accept all the EU rules subject only to a transitional period and technical adaptations.

It would be unrealistic for Scotland to ask for a British budget rebate, though it could perhaps negotiate the phasing in of its budget contribution.

It wouldn’t need to ask for an ‘opt-out’ from the euro or the Schengen area: new members subscribe to the principle of joining them, but in practice they don’t need to do so until they want to. Scotland would accept the common agricultural policy and the common fisheries policy: now that they know what Brexit really means, many Scottish farmers and fishermen would be pleased.

The question of the currency remains difficult – whether to continue with the British pound, or create a Scottish pound. This was a weakness of the SNP’s campaign in 2014 and although it has done some thinking, it hasn’t yet defined a clear position.

Some commentators argue that the EU wouldn’t accept a country with a big budget deficit, which would no doubt be the case for Scotland following its separation from the UK, and with an economy suffering from the effects of the coronavirus pandemic, and the reduction in oil prices.

But that’s a misunderstanding: as a member, Scotland would be subject to the rules of the stability and growth pact, but they aren’t a condition for joining the EU.

The views of EU member states

There are claims that Spain, and other EU members with independence movements, would block Scotland’s application.

Provided Scotland’s independence is decided by constitutional means, Spain wouldn’t block it, any more than it has blocked seven other countries from joining the EU after they became constitutionally independent. In the case of Scotland, Brexit actually simplifies the matter since (unlike Catalonia) it is no longer part of an EU member state.

More generally, EU member states are already favourable to Scotland joining the EU. They perceive Scotland, unlike the UK, as disposed to cooperation rather than confrontation. It was not for nothing that ‘Auld Lang Syne’ was sung at the last session of the European Parliament before Brexit, and that ‘Scotland’ was displayed in lights on the European Commission’s headquarters on the night when the transitional period ended.

The potential consequences for Scotland

In terms of economics, an important difference now, compared with 2014, is that because of Brexit there would be a physical frontier for goods between England and Scotland – though not a frontier for persons, since there would still be a common travel area, as there is between the UK and Ireland.

Given that 60 percent of Scotland’s exports currently go to the rest of the UK, and the Brexit trade agreement is ‘hard’, the introduction of a frontier would hit Scottish exports of goods. However, Scotland’s financial services would benefit from regaining full access to the EU.

The long-term results are difficult to forecast. But it’s worth recalling that when Ireland joined the EU, together with the UK in 1973, its exports to Britain were 55 percent of its total exports. Now they are 10 percent of total exports, the Irish economy is doing well, and in terms of gross domestic product (GDP) per head, the Irish people are wealthier than the British.

In terms of political influence, independence means that Scotland would lose its voice in Westminster but gain a voice in the EU. Of course, Scotland would be a small member state – with its population of 5.4 million it’s about the same as Denmark or Finland – but remember that the EU’s institutions have arrangements for membership and voting that favour small states.