The SNP focuses on becoming independent but how will they fund it all? | Isabel Ralphs 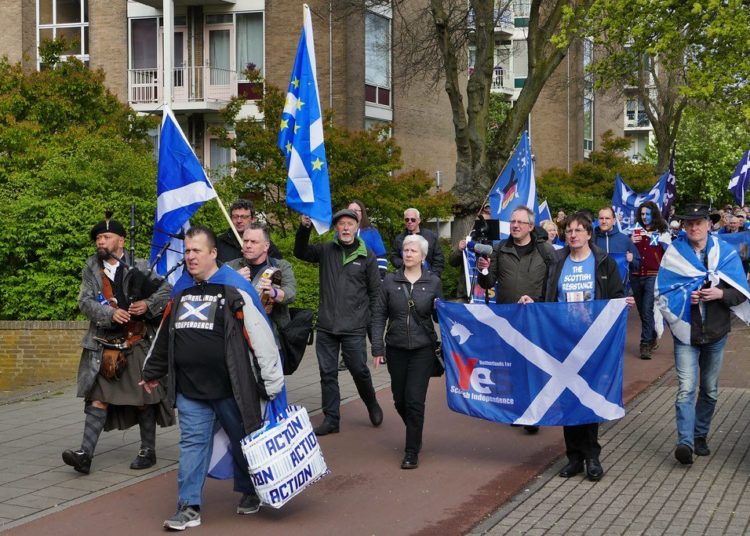 “A march supporting Scottish independence.” by tom clearwood is marked with CC PDM 1.0

As a student who spent their childhood growing up in Scotland, I cannot recall a time when the Scottish National Party (SNP) was not in power in my country. More than that, my memories of having a first minister who wasn’t Nicola Sturgeon are few and far between. In a recent conversation with a friend, we mulled over this fact and pondered if we might ever live to see a day when anyone actually managed to displace her from the highest office in the land. “Don’t we have term limits for this kind of thing?”, my friend asked.

“You know, I don’t think we do” I mused, surprised by my own response as I said it. The Scottish system of government was, at its inception, presumably designed not to need them. However, our founding fathers did not have the foresight to predict the storming success the SNP would have in the 20 years to come, and the highly centralised state of affairs this would leave us with.

Despite having an electoral system explicitly designed to prevent one-party rule, the SNP is entering its 14th year in power, and the seventh with Nicola Sturgeon at the helm. In another country, the fact that decision-making powers are concentrated in the hands of a very small circle (that includes the first minister’s husband as party chair), with essentially no threat to their continued reign, would raise eyebrows. However, for some reason, the same rules do not seem to apply in this country.

The SNP has galvanised young voters

Of course, a large part of the SNP’s successes lie in its relentless commitment to the independence debate; a question which is becoming increasingly split down the fault line of age. Support amongst Scotland’s young people for independence has risen significantly since the 2014 referendum, with a New Statesman poll from September last year finding 71 percent of 16 to 34 year-olds to be in support of the Yes campaign. This represents a seismic change from the picture of seven years ago, when 54 percent of Scots aged 16–24 backed the Union in the referendum vote.

The SNP’s gains in this age category are not surprising. The party, and its independence crusade, has on paper all of the things my generation looks for in a political campaign. Promises of radical change and a rebuttal of the status quo (also known as Tory politics) are alone already a winning combination. Combine this with the SNP’s left-leaning and progressive policy agenda and opposition to Brexit, and there are few boxes on the youth agenda that the party isn’t ticking.

Yet, despite sympathising with some of these causes, I still find myself in the silent minority amongst my age group on the question of Scottish independence and SNP support. Whilst my antipathy towards Westminster politics and anti-Leave tendencies are aligned with the views of most of my peers, I have yet to be convinced that an independent Scotland is a silver-bullet solution to fixing these, or any of the other problems that currently face our country.

In 2015, Nicola Sturgeon urged voters to judge her on her government’s education record and her campaign promise to tackle Scotland’s attainment gap between those from the most deprived areas and their more affluent peers. However, the fact that, six years on, little if any progress has been made to narrow this gap, was largely left out of discussions in the run-up to our most recent election.

So too were other problems with our healthcare system, roads and criminal justice system. A recent poll by Ipsos MORI found education to be the second-most important issue for Scottish voters, ahead of both the NHS and the pandemic but still behind the independence question, which took top spot. It is this prioritisation that meant the efforts of opposition parties to shift focus onto the SNP’s record on public service during election campaigning fell largely on deaf ears.

In the current discourse of Scottish politics these issues are not only deemed to be secondary concerns to the independence question, but by many as actually wholly attributable to the political ties we still have with the rest of the UK.

Over the last year, the SNP has been clever in capitalising on widespread weariness with Tory politics and a desire for change to galvanise their support. The consistently higher approval ratings that the first minister received compared with her counterpart in Downing Street throughout the pandemic, despite making many of the same mistakes, is stark proof of just what an easy scapegoat the Westminster government currently is.

Practical considerations take a back seat in the independence campaign

In taking this approach, the SNP managed to successfully divert attention from other policy failings, as well as skirting around the details of how an independent Scotland would actually be financed. I enjoy going back home to pick up my free prescriptions and bragging about the lower interest on my student loan to my university peers in England, as much as the next student would. However, there is no evidence to support the idea that, in an independent Scotland, policies like these would actually be sustainable.

Certainly not when free university tuition, free care for the elderly and, most recently, promises of free bikes and bus travel for young people, are also added to the bill. Whilst laudable pursuits, it is these hand-outs that have left Scotland paying 30 percent more on public services (£1.30 per person for every £1 spent in England), under the generosity of the controversial Barnett formula, according to figures released by the Institute for Fiscal Studies earlier this year.

The real change we need to see

Politics and polarisation are pretty much synonymous terms these days. I realise wishing for the former without the latter would be a naive and fruitless search. However, it is difficult to not become disillusioned with a government whose campaign has, for the last 10 years, been built on the exploitation of polarisation, at the expense of practical policy discussions.

I yearn for change as much as the rest of my peers. However, the change I want to see does not involve cutting ties with our closest friends and allies in the hope everything will magically be made better. Rather, it is a shift in priorities towards the issues that really matter on the ground, and a system of governance that fosters competition that is not divisive but productive instead.