As the practical impact of the bureaucracy and red tape agreed as part of the NI protocol become clear for businesses and citizens in the province, there are worrying signs of tensions rising between London and Brussels. 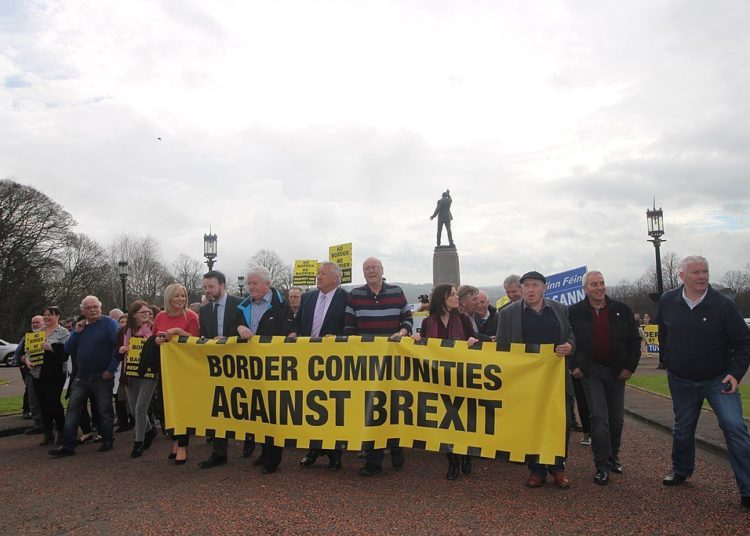 The escalating row between the UK and Brussels about the Northern Ireland protocol threatens to spiral out of control with reports that Michael Gove’s letter to EU Vice-President Maroš Šefčovič has provoked a strong backlash. One EU diplomat has reportedly called the letter “outrageous”, while another said member states were “incandescent”.

Other reports claims an EU source has said, “It would already be a step forward if Britain put as much energy into the implementation of the NI protocol as it puts into complaining about it”.

The seeds of the row over the vexed Irish border issue can be traced back to October 2019, when Boris Johnson was desperately casting around for a solution to another of his self-inflicted problems.

Having assured voters in Northern Ireland that the land border would remain “absolutely unchanged” and with his own deadline rushing up, knowing that his threat to leave the EU without a deal was an empty one, he needed something to deliver on what had seemed a near impossibility.

The NI protocol was the last-ditch solution hurriedly cobbled together at the last minute and to which he agreed. It now seems his quick-fix is coming apart.

Within days of the Withdrawal Agreement, the Department for Exiting the EU had issued an impact assessment, part of which (page 44 section 4.2) dealt with the NI protocol. It forecast in detail all of the problems and difficulties being experience now by traders and citizens in the province.

Tory MPs, the government and in particular the prime minister, ignored the warnings. Johnson wilfully refused even to acknowledge there would be checks on trade in either direction.

Debated on 22 October 2019, The EU (Withdrawal Agreement) Bill was rushed through parliament and during the meagre three hours allowed for debate Ian Duncan Smith rejected calls for more scrutiny, telling MPs the WA had already been “thrashed to death” and said he would “love to know” what it was that had not yet been covered.

IDS is now calling for the government to “rectify the mess that is becoming obvious with this particular protocol”. Implemented in UK law on 23 January 2020, it has lain on the statute book like a ticking time bomb for 12 months.

The practical effects of the protocol were not felt until 1 January this year. Within a few days, empty shelves in the province’s supermarkets were being reported on social media, with warnings of more serious issues when the grace period (that exempts retailers from some red tape) ends on 31 March.

As tensions rose, border checks at Larne and Belfast were suspended when graffiti and “sinister and menacing behaviour” appeared to threaten port staff. The Police Service of Northern Ireland rejected any suggestion of paramilitary involvement and two men have now been charged with criminal damage.

On Friday 29 January, after Pfizer advised the EU Commission there would be a significant shortfall in the promised vaccine delivery schedule, the EU published a draft regulation to control exports from Pfizer’s Belgium plant.

Noticing that NI shipments could find their way to Great Britain, the regulation threatened a technical use of article 16 of the Northern Ireland Protocol, to require Pfizer to notify the authorities of shipments to the province. Although rectified within hours, it was a serious mistake and in part a response the UK’s speedy roll out compared to the EU.

Under growing pressure, both from the Democratic Unionist Party (DUP) and his own MPs, Gove seized on what he called the EU’s “grave error” and demanded what amounts to reparations to “stabilise the situation”.  He reminded Šefčovič that the protocol should impact as little as possible on the everyday life of communities, with the phrase “as little as possible” doing a lot of heavy lifting in Gove’s missive. He seemed to think it meant no impact whatsoever.

Gove raised six specific and urgent points which needed solutions “this week” but spoke of a much longer unpublished list of “wider” issues. He called for a two-year extension to the grace period, despite last year personally and repeatedly rejecting requests for the same thing.

On 5 February, Vernon Bogdanor, professor of constitutional law at King’s College London and the government’s go-to expert in matters of the constitution, entered the fray with an explosive article in The Telegraph: There is a solution to the Irish border problem.

He was openly critical of the protocol, asking if any EU member state would accept a regulatory border within its own territory. He then calls into question the protocol’s legitimacy, because it was “agreed without Northern Ireland’s consent, a breach of the spirit of the Belfast Agreement”.

Bogdanor suggests that a border poll by the citizens of Northern Ireland, and sooner rather than later, should decide the position of the border. He believes that will point “to a border on the island of Ireland” although checks, he claims, need not actually take place on the border.

Calls for a new solution

Two days later, on 7 February, came an announcement of a new “solution” issue using a proposal from The Centre for Brexit Policy (CBP), a think-tank headed by former Tory NI secretary Owen Paterson, with DUP MP Sammy Wilson among the directors. Both are avowed Brexiters.

Paterson’s CBP claims a hard border is not be needed. His “mutual enforcement” solution would simply make it illegal for anyone in NI to export goods to the Republic which do not meet EU regulatory standards or avoid tariffs. The Republic would pass a similar law covering illegal goods moving the other way.

As far as controlling the integrity of the single market, the proposal seems to boil down to this statement, “A good becomes unlawful on the exporting side of the border the moment it is exported in breach of the importing territory’s rules”. How it would be enforced is not explained. It looks suspiciously like another unicorn.

The DUP, adamantly opposed to the protocol, have launched a coordinated campaign to get it scrapped. Ireland, the EU and the British government are for the moment determined to persevere with the present agreement, although Gove has already called for a ‘reset’ ahead of his meeting this Thursday with Maroš Šefčovič.

There is a danger of a further descent, perhaps into a state of perpetual acrimonious argument. What is clear is that the Irish border problem is far from resolved.