While the prime minister may not have a moral compass, did 148 Tory MPs discover theirs this week? 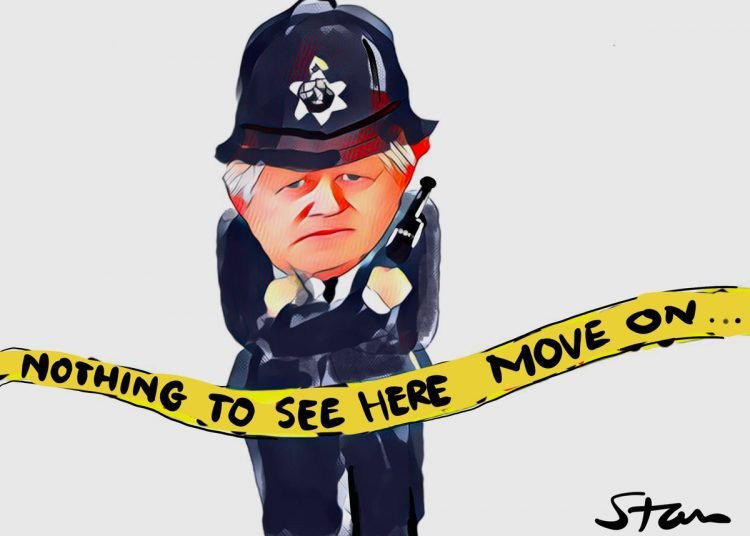 Boris Johnson - move on, by Stan

In the wake of Monday night’s confidence vote in Boris Johnson, there was the predictable barrage of loyalists claiming an overwhelming victory. That claim bears scrutiny. The urgings from Johnson’s camp followers that we can all ‘move on’ is a mantra that has dominated his premiership. After all, he has a talent for creating frequent messes that he’d like move on from.

‘Not so fast’, might well be the response from the ‘not confident’ MPs and those in the public who still wish to see some consequences for the man who has broken the law by condoning social gatherings within the bounds of No 10 Downing Street, attended events run with total disregard for covid regulations, and then in parliament denied either had happened.

The urge to ‘move on’ signifies a fear that amongst the higher ranks of the Conservative Party, this saga is far from over. And they are right to recognise that it will not pacify the millions of constituents across the country who petitioned their Tory MPs to depose Johnson in Monday night’s vote.

Intriguing revelations before the count

In reviewing the events of the vote, some quotes from MPs who support Boris Johnson are worth revisiting.

One could only smile at those MPs decrying as ‘lying snakes’ their colleagues who voted no confidence in Johnson by not revealing their intention. It cannot have escaped their notice that the lying snakes that have so angered them, were seeking to depose the lying-snake-in-chief. If the snakes acted mildly dishonestly to get rid of a serial liar, they could hardly complain.

Johnson is the prime absolver of ‘trivial’ transgressions when it comes to his conduct under the ministerial code. Change the rules to avoid the judgement of dishonesty, is a Johnson tactic. Why isn’t such respect and generosity extended to the snakes by those MPs who express confidence in the prime minister? The snakes are only following their hero’s example.

Then step forward Nadine Dorries, the culture secretary whose talent as a PR spokesperson often turns out to be in favour of the opposition and to the disadvantage of the government in which she sits.

Dorries revealed that donors who had in recent times given £18m to the Conservative Party, had said they would stop their funding if Boris Johnson was removed as prime minister. It turned out that 22 of the Tories’ largest donors had written a joint letter to this effect. She was effectively saying the decision on who is leader of the Conservative Party, and thus the country, should be geared to the preferences of rich vested interests rather than the wishes of MPs. This also makes it abundantly clear that these donors expect something back for their support.

The standard Tory riposte to any suspicion that donors are buying influence is, ‘It’s all declared, as it should be, and is perfectly legal’. Be that as it may, Dorries has at least come clean, albeit inadvertently, about the kind of influence it buys. £18m is a huge amount of money, clearly given to influence decisions made by politicians.  Dorries is clearly content that these donors should carry more sway over the choice of leader than do the Tory MPs in parliament.

The vote itself: some indisputable facts

The ‘not confident’ vote was much worse than the worst-case scenario expected by Johnson’s supporters. Their expectation management started at 100 votes against him, climbed later to 120, and finished with intimations that it might reach 130. In the end it was 148.

Other Conservative prime ministers have faced similar votes, though none fared as poorly as Johnson. Theresa May achieved 63 percent support from her MPs in 2018, John Major had 66 percent support in 1995, and Margaret Thatcher got 84 percent support in 1989. All were out of office within two years of wining their confidence votes by a bigger margin than Johnson – who as yet is refusing to resign.

This suggests any confidence vote undermines a sitting prime minister even if the effect is not immediate. Honourable resignation is not in Johnson’s repertoire and history is no guarantee of the future, but this strongly suggests the prime minister is unlikely to be in for an easy ride in the coming months.

One telling way of assessing the vote is not by using percentages but by relative numbers of MP who voted in each direction. For every 12 MPs who voted, seven of them expressed confidence in Johnson but five did not. Suddenly that doesn’t look like an overwhelming victory. For the party with a 180-seat majority at the last general election, the proportion of MPs from within same party now expressing serious dissatisfaction with their leader has to be a major concern for Johnson. Voting against your own leader is not something any MP does lightly. 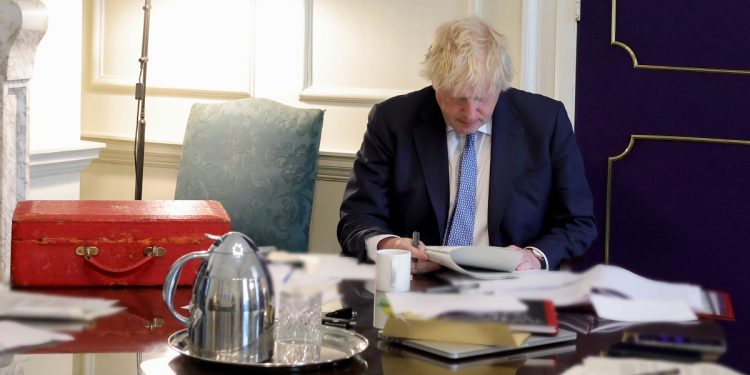 It would be a contradiction in terms to imagine ever saying that Johnson has re-found his moral compass. He’s never owned one. But the 148 MPs who had the courage and principle to stand up for what they believe in and defy what Johnson represents, deserve some credit for doing so.

The fact remains that the majority of Tory MPs have chosen to be drawn into the moral vacuum that Johnson represents and support him in blatant disregard for his repeated lying, law breaking and bankrupt leadership. A letter from Kevin Hollinrake, Tory MP for Thirsk and Malton, to a constituent explaining his decision to support Johnson, epitomises the depths to which many in the party have sunk. “I realise many people will not be happy with my decision [to vote for Johnson] but I don’t think there is anything to be gained from engaging in a leadership dispute or ongoing correspondence on this matter”. In other words, “I’m not going talk about it anymore”.

Voters will not forget this period or tolerate such wilful blindness by Tory MPs to the failings of their leader.  The time will come for voters to express their views on Johnson’s leadership. The first opportunity for some of them will be at the imminent by-elections in Wakefield and in Tiverton and Honiton on 23 June.

This was certainly not the resounding outcome that Johnson would have hoped for. We are invited by his supportive MPs to ignore his failures and shortcomings as a prime minster and wipe the slate clean by ‘moving on’. They can try that tactic, but the lame duck prime minister has much waddling still to do before the Johnson problem is fully resolved. If the MPs won’t remove him, the voters must.