Only in a more forgiving political climate can the divisiveness pushed by the Caesars and Johnsons of this world be overcome. 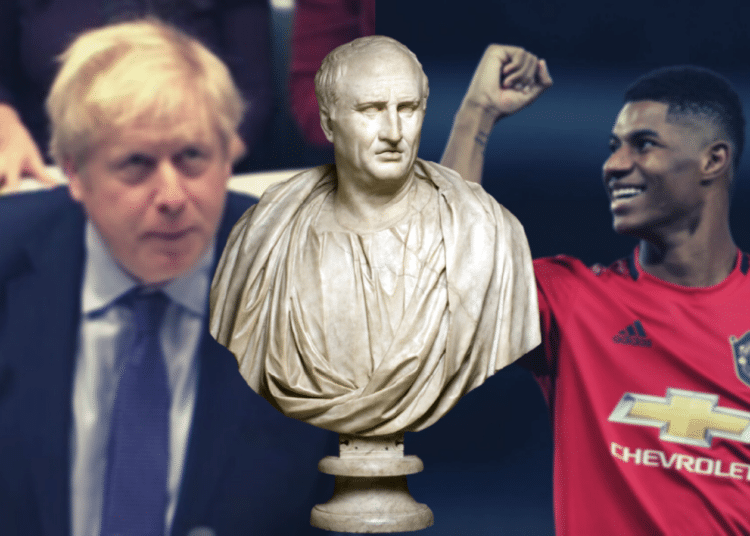 Images by House of Commons for pixabay, Alan Robson for Creative Commons, and Harrietxd on Wikimedia Commons

Classics is often at the heart of Boris Johnson’s political brand, and particularly his admiration of the orator Marcus Tullius Cicero. In April of this year, he got in trouble with the historian Dame Mary Beard after misquoting the statesman, and previously he has referred to his use of Ciceronian rhetorical techniques.

Comparing ancient and modern figures can often be a fruitless process and often in fact risks obstructing analysis. Researching this I saw articles comparing Johnson to Catiline, Pompey, and Cicero himself, all based on unhelpful and flawed points.

Yet it struck me how similar Johnson’s career progression was, instead, to that of Julius Caesar. Putting aside surface-level points about their reputations as philanderers, or their upper-class backgrounds, the politics of the two are very similar. Both staked much of their careers on representing the voice of the people. Caesar’s early life was marked by prosecuting corrupt governors, putting on spectacular games, and provoking the aristocracy. Johnson similarly courted public opinion with his showmanship at the Olympics, his supposed anti-establishment turn in campaigning for Brexit, and his feigned concern with “levelling-up” the North.

Meanwhile, both relied on the politics of division to get their own way. Caesar was brutal to his enemies in his early career, running campaigns of street violence and breaking norms of cooperation amongst the aristocracy to advance his agenda. Similarly, Caesar brought many of the “dregs of the aristocracy” under his wing as allied demagogues or proteges, like Clodius or Mark Antony, just as the prime minister has happily re-employed disgraced former ministers like Priti Patel, Gavin Williamson, or Dominic Raab, based on their loyalty or ability to cause outrage.

Finally, both undermined their state’s institutions, and more for personal gain than for its own sake. Many of Caesar’s worst actions were out of defensiveness or expediency: his first assumption of the dictatorship, for instance, was done only to ensure that magistrates could be elected for the following year. Similarly, most of Johnson’s anti-democratic moves have been made to achieve the singular goal of Brexit, whether that be illegally proroguing parliament or undermining international law.

What is clear with both men, however, is that their actions paved the way for those who had no intention of respecting democracy, whether that be the Triumvirate after Caesar, or figures such as Priti Patel, whose Home Office has already put forward plans to replace the human rights act, attack asylum seekers, and introduce exclusionary voter ID laws.

The comparison is not fully accurate, however. Caesar was a ruthless and calculating politician, who prosecuted elderly statesman on capital offences to boost his populist credentials, and is estimated to have killed more than a million Gauls in his ten-year campaign in the region. Johnson’s faults lie more in ignorance and dishonesty, and whilst his incompetence has led to disaster already, he lacks Caesarean steel.

Ironically, the solution to this toxic form of populism can be found in Cicero’s writings. The orator’s main significance in history was as a dealmaker, reconciling factions and building coalitions. As a philosopher he was an Academic Sceptic, and believed in constant uncertainty, as he notes in his philosophical treatise On the nature of the gods:

“Moreover, it is characteristic of the Academy to put forward no conclusions of its own, but to approve those which seem to approach nearest to the truth; to compare arguments; to draw forth all that may be said in behalf of any opinion; and, without asserting any authority of its own, to leave the judgement of the inquirer wholly free”.

His philosophy, when combined with his anxious personality, left him often paralysed and indecisive, and he had a tendency to change his mind or bend to pressure, most famously when Pompey insisted that he speak in favour of Caesar’s loathsome Gallic command. For Cicero, however, what we might in today’s age call a lack of principles was simply moderation and flexibility, and he declared in one of his letters that, “no well-informed person has declared a change of opinion to be inconstancy”.

These Ciceronian politics can be seen on the rise during the pandemic, as public figures have become increasingly flexible and responsive to the public mood. In many ways, Keir Starmer embodies this: having been a flag-bearer for Remain within the Labour party, his politics as leader have been around reflecting public consensus, moving away from divisive issues and adopting common-sense stances. He has also shown himself as responsive to the public mood, reacting to criticisms of having no policy agenda by starkly distancing himself from government policy, calling for a circuit-breaker lockdown, which has majority support even amongst Conservatives.

It has been shown too by Marcus Rashford, who has unified the country under a consensus issue, the provision of free school meals. He has even attempted to minimise divisiveness within his own movement, tweeting an acknowledgement of the abuse received by MPs over the past few days and encouraging his followers to “rise above it”.

Even the Conservatives have shown greater flexibility, with their famed ponderance for U-turns. It is indecisive, to be sure, and a symptom of poor governance, but recognising the will of the people is a much truer form of populism than forcing that same will down the people’s collective throat!

Meanwhile, this same form of new populism is being taken up in the States by Joe Biden, in his campaign against Donald Trump’s Caesarean populism. At the last presidential debate, the former vice president did the unthinkable, in admitting that he made a mistake regarding his involvement in the 1994 Violent Crime Control and Law Enforcement Act. The democratic nominee even set up a joint policy taskforce with his defeated rival, Bernie Sanders, to put together a platform which represented his whole party, a platform which has shifted him noticeably to the left.

Populism has been rightly attributed a bad name, but it has the potential for good. This is something which Cicero recognised, and he would often co-opt the term to describe himself, whilst criticising his rivals’ more divisive demagoguery. Cicero’s vision of what populism could be was best articulated in On duties, a treatise in the guise of a letter of advice to his son:

“This is the highest statesmanship and the soundest wisdom on the part of a good citizen, not to divide the interests of the citizens but to unite all on the basis of impartial justice.”

We could all do with reading a bit more Cicero, and no-one more so than the prime minister. If Johnson is to evoke the orator, he should understand that Cicero would have been appalled at his immoderation, demagoguery, and divisiveness.

Whilst Cicero’s idealised populism might have some future, its ascent is not inevitable. We all have a role to play in building consensus, accepting each other’s failings, and letting public figures admit their mistakes. Only in a more forgiving political climate can the divisiveness pushed by the Caesars and Johnsons of this world be overcome, and a better world be achieved for all.