Conservative MPs happily support the PM in removing fundamental liberties like the right to protest, but object to basic pandemic protections 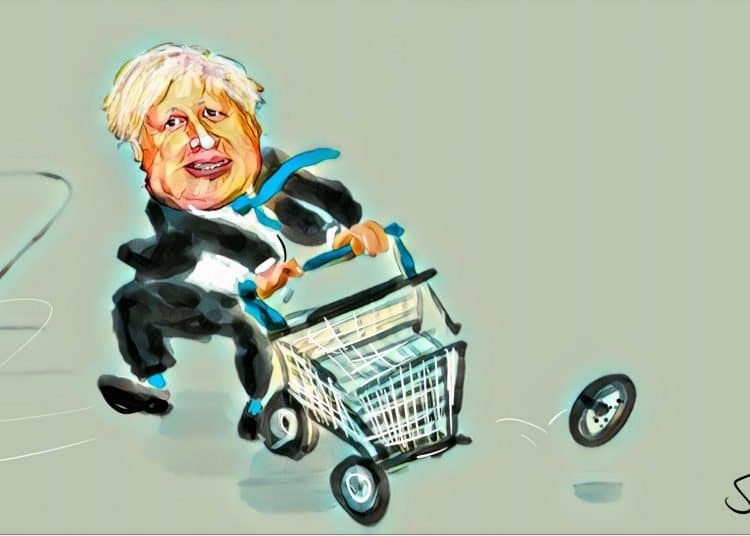 If Boris Johnson has been looking forward all year to the season of peace and good will then he might be a touch disappointed. Curiously, the great British public doesn’t take kindly to seeing its prime minister breaking his own rules.

We already knew that the health minister who asked us to maintain strict social distance was busy making love to his best friend’s wife. We already knew that the prime minister’s closest personal adviser lied about travelling the length of the country whilst the rest of us were told to stay at home. Now we discover that the prime minister casually broke the rules about social distancing and employed people who laughed about it.

When the people who set rules for others breach them so routinely whilst giving out lucrative contracts to their cronies, we are not dealing with a case of a few silly little mistakes. We are dealing with an arrogant attitude that sees laws and common decency as being something that only the little people need to worry about.

Such a deeply corrupted view of the world may be most evident at the top, but it goes much deeper. That is why the Conservatives are going to find this so hard to recover from. The shocking reality is that Boris Johnson is not the worse person they have to offer. Their ranks contain some pretty dreadful alternatives.

If Johnson is driven out of office for lying, cheating and incompetence then the candidates to replace him don’t exactly inspire confidence. The public could be faced with a choice of the likes of Rishi Sunak, Liz Truss, Michael Gove or Priti Patel. Or rather the public won’t be faced with any choice. A small number of people who are sufficiently enamoured of the Conservative Party to be members – around 200,000 – will get to choose their favourite extremist. The rest of us will be expected to put up with their choice – or face jail sentences if we make any noise at a protest.

That is what is so very shocking about the recent rebellion in the ranks of Conservative MPs. We are being governed by people who will enthusiastically troop through the voting lobbies without a second thought if they are asked to destroy ancient British liberties like the right to public protest. If they are asked to protect the public against a pandemic, they suddenly develop a backbone and declare themselves defenders of freedom.

It is of course important that people are free to choose whether to be vaccinated. It is also important that the rest of us are free to get on a train safe in the knowledge that those surrounding us have been vaccinated, are wearing masks, and are keeping their distance. I want to be free to go into a café and know that the people there have taken basic precautions about protecting the health of others. My freedom to go out is seriously compromised if I cannot trust the safety arrangements when I leave the house.

It is not Stalinism to ask someone to respect the health of others in public places. Indeed, saying so is every bit as offensive as trivialising the holocaust. Millions died in Stalin’s purges for daring to criticise the government. There is no remotely legitimate comparison between mass murder in the Soviet Gulags and asking someone to show evidence that they are safe before they are allowed to mix with thousands of others in a football crowd. Especially in the middle of a deadly global pandemic.

Right-wing extremists are a danger to this country

The consequence of the Conservative backbench rebellion last December was a delay in action that resulted in a panicky cancellation of Christmas gatherings, thousands of extra deaths and horrible damage to businesses in January and February. Nothing was learned. Instead, this year’s rebellion has been even bigger.

The Conservative Party has allowed itself to be infiltrated by political extremists from the right more comprehensively than any Trotskyist ever managed to capture the Labour Party. For the past four years, the key test of fitness for office within the ranks of the Conservatives has been whether someone was blindly loyal to the Brexit project. Talented people like Anna Soubry have been weeded out. Meanwhile the crass fanatic for elite rule Jacob Rees-Mogg sits smugly around the cabinet table – when he isn’t lolling about on the benches of parliament.

That is what can happen when a country is ruled by a small minority who don’t remotely reflect the wishes of the British public. Most people in this country have a healthy disrespect for politics and for politicians. Those who choose to join the Conservative Party are a vanishingly small minority. Those who attend their branch meetings or attend their party conferences are an even smaller one. Yet the future of our country is effectively in the hands of that very strange group of enthusiasts.

Conservatives moving further to the right

Each year the Conservatives move further to the right whilst becoming increasingly dependant on large donations from lobbyists who expect favours. In such circumstances, it is not enough to just get rid of a bad prime minister. It is necessary to get rid of a system. At the last election, almost 53 percent of voters cast their ballot for a party that is to the left of the Conservatives. Just under 47 percent chose a right-of-centre candidate. Yet we are being ruled by a small right-wing faction of the right-wing party that the public rejected.

The Conservatives didn’t win the last election. The public lost it. The full extent of the damage from that loss is beginning to be clear. That is why we need all the progressive parties to sign up to proportional representation and to start to lay the foundations for a more representative government and a more co-operative style of leadership.

We are told by its supporters that first past the post politics gives a country strong and stable government. I leave it to the judgment of readers as to whether what has taken place in Britain over the past few years has been remotely strong or stable.