Alex Toal reports on the meeting of the Public Accounts Committee. Here, experts from providing PPE criticised the government's response outsourcing PPE during the pandemic, and denounced the use of the "fast lane" to get contracts out. 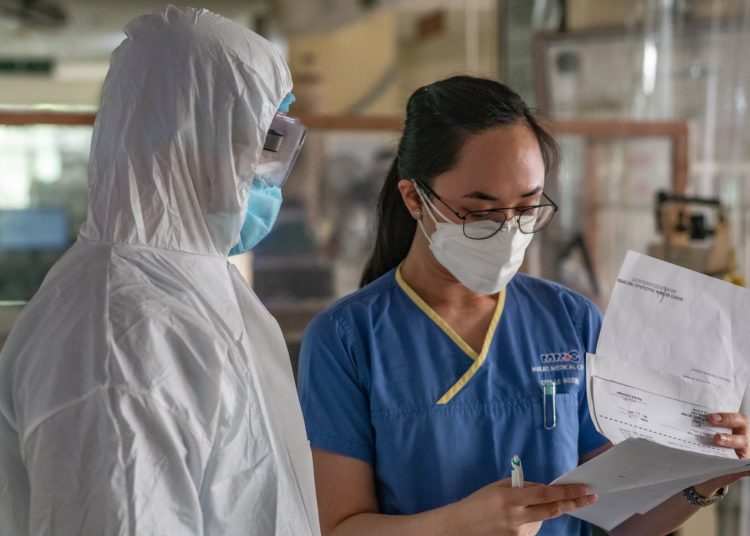 COVID-19, Philippines”by Asian Development Bank is licensed under CC BY 2.0

This week, expert suppliers of personal protective equipment (PPE) slammed the government’s pandemic response in a hearing of the public accounts committee (PAC). The PAC was investigating the inner workings of outsourcing by the Department of Health and Social Care (DHSC) in the early stages of the pandemic, and what lessons can be learned.

Present at the committee were:

Three main problems emerged from the witnesses: the VIP fast lane, a culture of under-supplying PPE in DHSC, and lack of expert knowledge within the department.

The VIP lane for providing PPE

When it became clear that PPE would be in high demand at the start of the pandemic, Thomas Martin recounts, “a highly regulated world became a feeding frenzy” for big companies who could finance speculative projects into providing PPE. Nor does Martin think that the response from the government to this “exponential wave of offers” was at all coordinated, with no way to tell which offers were real and which were speculative.

This left the ‘VIP lane’, whereby if a company has a connection or relationship with an MP or civil servant, their application can be fast tracked, as the easiest way of getting contracts. Research by the Good Law Project has already shown that a company that used the VIP lane was ten times more likely to win a contract as one applying normally.

However, as Martin notes, it wasn’t clear how to join this VIP lane. Martin had tens of millions of pounds of certified PPE in the UK at the start of the pandemic, but was unable to get it to hospitals because of the inability to secure a contract:

“Myself and my team were unaware of the protocols within a fast-lane application for offers of support for the government … I wish we could have done more, but we had no response.”

The fast lane and lobbying

One company that seems to have benefitted from this fast lane was Bunzl. Bunzl employed former Conservative Party chair Lord Feldman’s lobbying firm when Feldman was appointed as an adviser on outsourcing to health minister Lord James Bethel. Feldman had written to Bunzl representatives, saying:

“I have spoken to [Andrew Wood, a Cabinet Office official] about Bunzl and the opportunity for you to supply the UK government with equipment. He will be in touch.”

Ian Liddell notes how officials from DHSC approached Bunzl directly to help deliver PPE from suppliers in China to the UK. However, Bunzl had no experience in transporting PPE, and Liddell had told DHSC this, who nonetheless persisted in awarding them the contract.

Ultimately, it seems as though Bunzl fulfilled their obligations, but unlike the other companies represented at the hearing, had been helped by the fast lane to get this contract. In the aftermath of his experience being excluded from the outsourcing process, Martin said that he was now more likely to consider employing lobbyists.

A culture of under-supplying PPE

Some of the most moving evidence from the session came from Sarah Stout. She recounted how, every year, DSHC has ordered just half of the required amount of PPE for the normal flu season. Despite this, her company would produce the amount required, which would eventually be ordered by DSHC once their original order ran out.

In December 2019, Stout said, it became clear that there would be a high demand for PPE, and hospitals started getting in contact with Full Support Healthcare with concerns.

“We started to talk to SCCL [the NHS supply chain managers] about stock issues in December 2019. All of the hubs in the country were emptying. There was no stock, and hospitals were starting to call, saying that they were in a panic.”

Stout had personally intervened with the government, telling them in this period to purchase as much stock as they could, particularly since many PPE suppliers were in fact located in Wuhan. The civil servant whom Stout had talked to had tried to do this, but was ignored by higher-ups.

Stout says that it was at this point that her company had “ripped up the rule book”, producing hundreds of millions of pounds worth of PPE which had not yet been ordered, without any guarantee that this cost would be covered.

As Stout notes, however, it was not within SCCL’s remit to make such orders:

“They do not have approval for spending huge amounts of money, their job is to facilitate frameworks and contracts and follow due process. So when there was an unprecedented demand for products, I think there was a little ‘rabbit in the headlights’.”

As we saw with Martin’s evidence, doing the right thing and following existing frameworks, as Stout did, led to expert suppliers being locked of the process. The problem came higher up in the command chain, with a failure to realise the extent of the situation and act with existing suppliers.

A lack of expertise about PPE

One problem that many of the experts noted was a lack of expertise within departments about what PPE was suitable. In August 2019, Stout had told the government that existing stocks of valved masks were not up to standard:

“Then, the pandemic hit and millions of valved masks were bought from multiple suppliers. It was only later in the year that Public Health England released a paper telling staff that they should not be wearing valved masks.”

Stout also noted that there was a clear lack of expertise by procurers in SCCL. She said at the committee that she had been honest about the timeframe it would take to deliver PPE. “Because we gave an honest answer about the timeframe, we were rejected.”

The witnesses were also clear about the consequences of these failures. Stout notes that NHS staff had called up her company in tears, begging to buy PPE with their own credit cards. Meanwhile, hundreds of millions of pounds were wasted on companies that could not provide the stock needed.

When the committee asked about whether the government had learned lessons from these events, the response was mixed. Stout is fearful of complacency within DHSC, since excess stock has been bought during the pandemic, and existing frameworks with contractors like herself are still being neglected. Meanwhile, Liddell noted that 450,000 pallets of PPE are being kept within his stores, which will soon have to be disposed of if not used or delivered to hospitals.

It is clear that lessons still need to be learned from these problems with outsourcing. Sometimes, outsourcing contracts to acquaintances turned out well, cases like Bunzl prove that. But, as this hearing showed, legitimate suppliers were locked out of the room, while valuable time and money was wasted by poor practice.