Poles and Ukrainians have a history of border wars, common enemies, and invasion. And yet today, the two regions share so much. 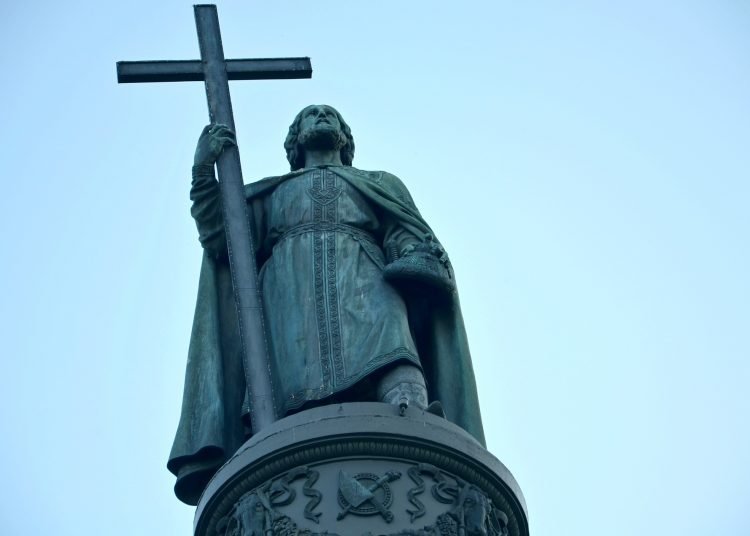 Vladimir the Great. Image by Александр Красовский from Pixabay

A thousand years ago, today’s Poland and today’s Ukraine were proud independent states. Ukraine as we know it was called Russia in Latin, Rossia in Greek and Ruś in Polish. Its ancient Slavonic language, the ancestor of Ukrainian, was known as Ruski (a bit like ‘roose-ki’), and its legal code the Ruska Pravda.

My family, usually known as Polish, stretches its ancestry back to Halka the ‘convertor’, who according to legend was Vladimir’s ambassador who brought Christianity back from Constantinople. The state’s huge territory included today’s Moscow and Lviv and reached Vilnius (capital of today’s Lithuania) – but these cities did not yet exist and were founded later.

There were border wars between Poland and Ruś but nothing exceptionally brutal, largely due to the great distance between the regions; there are 500 miles between Kraków to Kyiv, and Poland had Germans to the west and the Ruś had Tartars to the east.

There then came several hundred years when the two states were equal partners. The Kyiv state had been destroyed by Tartar invasion but then re-emerged as the bulk of the enormous Grand Duchy known as Lithuania, which stretched from the Baltic Sea to nearly the Black Sea. The majority of the population were Ruski.

The two states had a common enemy, the Teutonic knights, who were mostly German but often included crusaders from other western countries. The knights invaded both Poland and Lithuania under the pretext of converting the locals to Christianity.

At the Union of Krewo in 1385, the Grand Duke agreed to marry the young Queen of Poland and became King of both countries united under the same crown, similar to how England and Scotland had the same monarch from James I in 1603 onwards but continued for some time as separate countries.

The partnership between the two states saw the defeat of the Teutonic knights at the historic Battle of Grunwald in 1410. My family, from the little town known as Leduchów in Polish or Ledihiv in Ukrainian, was there.

The name ‘Russia’ was taken by the Prince of Moscow

In 1547 Ivan the Terrible, Prince of Moscow, decided to pinch the 600-year-old name ‘Russia’ from Kyiv for his own state and declare himself ‘Tsar’, which comes from Caesar. From then on, the Tsars of Russia supported by the patriarch of the ‘Russian’ Orthodox Church, did everything they could to build a kind of new Roman Empire of the Slavic and Orthodox worlds.

In 1569, Poland and Lithuania signed the Lublin Act of Union, creating the so-called Republic of Two Nations, sometimes known in English as the Polish Commonwealth. Similar to the Act of Union signed by England and Scotland in 1707, it provided for a federal state with a shared parliament, though they still had separate laws and separate armies.

This was the start of a gradual deterioration in the relationship between Poles and Ruski (the future Ukrainians) which continued for nearly four hundred years.

Grand Duchy of Lithuania is divided

First, the Grand Duchy of Lithuania was split in two. The northern part comprising mostly of today’s Belarus and Lithuania, remained as the Duchy and was formally the ‘second nation’, but being much smaller than Poland, was effectively the junior partner.

The southern part, including the province of Kyiv and much of today’s Ukraine (except the Lviv area, which had belonged to Poland for centuries), was transferred from the Grand Duchy to the Kingdom of Poland.

Noble landowners in the Commonwealth parliament were rapidly Polonised. So many leading families like my own soon considered themselves Polish, much to the resentment of the Ruski serfs. 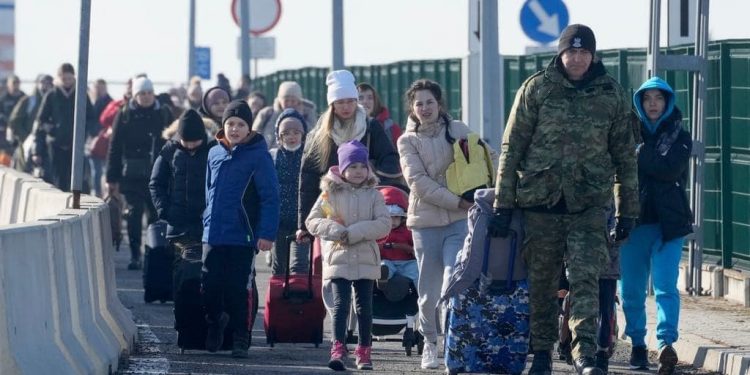 Then at the Union of Brest (Brześć in Polish) in 1596, with the Counter Reformation in full swing in much of Europe, and the Ruś fearing Russian domination, the Catholic Church encouraged the Orthodox clergy of Ruś to convert to a new church known as the Uniate or Greek Catholic Church.

It would keep its Old Slavonic liturgy, but would owe its allegiance to Rome. The pressure to convert was sometimes rather brutal and a vociferous minority opposed it, dividing the Ruś into Uniates and DisUniates.

Bogdan Chmielnicki, leader of the biggest rebellion against the Poles, helped Russia take eastern parts of Ukraine including Kyiv. Poland accepted this in a 1686 treaty, so Eastern Ruś was no longer in the Commonwealth. The rebellions in the Western Polish part were in the end crushed.

By 1697 the Lithuanian and Ruś elites were so Polonised that they did not use their Liberum Veto (right to veto laws) to oppose the abolition of Ruski as an official language by the Commonwealth parliament on the pretext that it could “no longer be understood by the Polish genius”. The ordinary Ruś discovered that in the Republic of Two Nations the language of their nation was no longer official.

A few years later, in another attempt to create an independent Ruś or Ukrainian state, Ivan (Jan) Mazepa Kołodyński, a Ruski nobleman highly educated in Poland, allied himself with King Charles XII of Sweden, who was invading Saxony, Poland and Russia at the time. But he and Charles XII were defeated by Russia at the Battle of Poltava, east of Kyiv, in 1709.

The battle had far-reaching consequences: Russia was now a superpower; Tsar Peter was ever after known as ‘the Great’; the Swedish Empire was over; King Charles XII spent five years in Turkey whence his cook brought back the recipe for meatballs, today a Swedish national dish; and Mazepa became a romantic Ukrainian national hero inspiring a Tchaikovsky opera.

Ruś / Ukraine was not considered a formal state

Ruś or the future Ukraine was divided in two – the western part being Polonised and the eastern part being Russianised. It was widely considered ‘not a proper country’, an accusation repeated by Putin today, and Ukrainian independence was put off for nearly three centuries.

It was then Poland’s turn to be ‘not a proper country’. From 1795, the whole Commonwealth was divided into three partitions. The western part was absorbed by Prussia and subjected to Germanisation, while the central and eastern part, including Warsaw, Lithuania, Belarus and far Eastern Ukraine, were all part of the Russian Empire and subjected to Russianisation. Russian domination was considered the worst and there were at least three major Polish uprisings against it, all of which failed, until the First World War.

The Southern part of the old Commonwealth, stretching from Kraków far into today’s Western Ukraine, was now in the Austrian Empire.  It was known as Galicia and its capital was Lviv (Lwów in Polish). Conditions in Galicia were the mildest of the partitions.

Some self-government was introduced in 1871, after which the Viceroy was Polish, and by 1907 there was universal suffrage.  Poles in Galicia were awarded the status of ‘ruling race’ in the Empire, along with the Magyars (Hungarians) and of course the German speaking Austrians themselves.  The penultimate Emperor, Francis-Joseph, was portrayed as a kindly old uncle.

The peasants were mixed everywhere but more likely to be Polish and Roman Catholic in Western Galicia, and Ruski and Uniate or Orthodox in Eastern Galicia.  There were effectively four languages: Polish, Ruski, Yiddish and bureaucratic German.

On the principle of ‘divide and rule’, Austria permitted the re-emergence of Ruski as the new Ukrainian language, with a revived literary and cultural tradition. The name ‘Ukraine’ (‘u kraina’ meaning perhaps ‘on the edge’ or ‘beyond the border’, initially the name of the Eastern Cossack region) became widely used.