Seb Dance, as our guest author, writes about polarised politics and how most issues are perceived as binary. In fact, politics is more complex and citizens cannot be divided into two tribes; the EU is a key example of this. 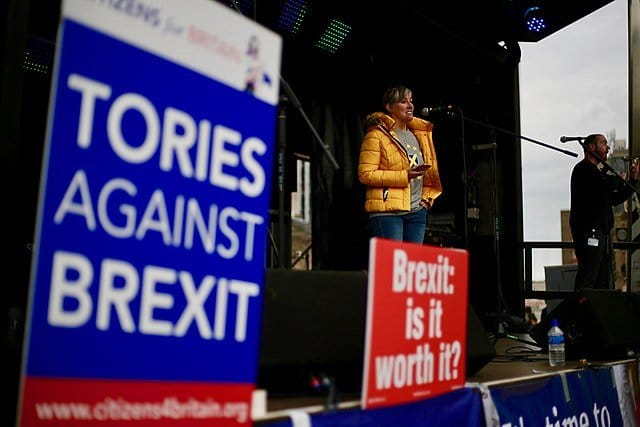 In our increasingly polarised politics, it is very difficult these days to assume any kind of nuanced position on anything. The ways you think about the world and the way we communicate to each other now seem to be governed by whatever tribe we see ourselves in.

In that vein, the dreaded referendum of 2016 was a symptom and not a cause of that polarisation. Whether you were ‘Remain’ or ‘Leave’ became a synonym for all kinds of other divides in society, such as whether you were metropolitan or rural, open or closed, progressive or conservative.

The fact that you could be a conservative Remainer or a metropolitan Leaver did not fit this binary definition of our lives. The rough edges of complexity were shorn away until we had only the smooth, contrary positions that stood in stark opposition to each other. Of course, that’s the problem with referendums themselves, which demand that complex issues be reduced to a binary choice. But that’s a discussion for another time.

For those of us on the seemingly forever-losing side of the culture war, it is perfectly reasonable for us to decry this polarisation. But we also have to acknowledge that for far too long now, Remainers have been falling into the traps left for us by our opponents and we have been guilty of playing along with the binary division ourselves.

The EU is a set of institutions that exemplify the antithesis of binary options. They comprise systems and layers that have evolved (and will always evolve) over many decades, and which have been informed by – among other things – design, history, accident, necessity and crisis.

Even at a macro level, it is possible to give example to this complexity: the Council is intergovernmental and informed by the same processes and quirks as other intergovernmental institutions such as the United Nations, the World Trade Organization or the Commonwealth; whereas the parliament is supranational, where MEPs sit according to political grouping and not country of origin. They behave differently and are completely separate institutions, but to the outside world either could constitute ‘the EU’.

The EU referendum and the ‘British voice’

I was often asked by Remainers why it is that Farage is able to ‘represent Britain’, with few other pro-EU British voices in the parliament getting speaking time. Of course, to the European Parliament, Farage was acting as his political group leader and his nationality was neither here nor there. But because of his politics and his message, to his followers he was acting directly as the British voice.

The complexity and layers of the system itself were stripped away and the result favoured those who needed the battle to be a simple one: a ‘them and us’ was established with Farage as the Brits and everyone else as the EU.

And so this simplification extends to the Commission president. As with any personality, whoever ends up being chosen is bound to have their strengths and weaknesses. And ever since the infamous (and, let’s face it, genius) headline of “Up Yours, Delors!”, that personality has been catapulted from relative obscurity in the UK to become the most obvious single spokesperson for the collective system of institutions that is the EU.

It should come as no surprise to anyone that Ursula von der Leyen has her failings. When the vote to approve her nomination came before the European Parliament in July 2019, those of us who were charged with the decision came under intense pressure, not least from our German SPD colleagues, not to approve her on account of her record as a minister in the German government. In the end, Labour MEPs decided to vote in favour of her nomination. There were ten of us. She won by nine votes!

It’s not a decision I regret. Indeed, I wrote at the time about the imperfect nature of the choice put before MEPs by member state governments. Essentially, we were presented with a type of candidate, where the replacement (should we fail to approve) would have been a near-identical character.

And that is my main criticism of the way in which Commission presidents are chosen – by the member state governments and not by the electorate or even those elected to represent them as MEPs.

A lack of flexibility in politics: the vaccine rollout

Because of the lack of flexibility society faces in dealing with complexities, the decisions taken in the early days of the vaccine rollout by the European Commission became part of the ongoing battle, whereby any and every opportunity is taken to portray the EU – them – as being worse at things than the UK – us.

As the personification of the EU, von der Leyen became the obvious target for the tabloids who seemed to delight in the EU’s poor performance in the vaccine league table. And the response of many was to leap to her defence. After all the EU must be the good guys, right?

The reality is that, in a litany of mistakes made by the UK government in its handling of the pandemic, the one decision they got right was on vaccine procurement. Whereas the Commission had focused on the cost-per-dose in the perceived interest of saving member states’ taxpayers’ money, the UK prioritised speed and delivery.

There are strong public interest arguments in favour of the former approach, but it should have been clearer from the start that the latter is what the situation demanded. It’s ok to criticise the Commission for this. It doesn’t mean the EU is useless or that Brexit was a sensible idea.

In a complex world, it’s the simple messages that cut through. Our challenge, if we are ever to win the argument for re-joining the EU – or even its orbit – is to convey that complexity, simply.

Seb Dance was Labour MEP for London 2014-2020, and was vice-chair of the European parliament committee on the environment, public health and food safety.

Seb was Labour MEP for London 2014-2020, and was vice-chair of the European parliament committee on the environment, public health and food safety. Seb is a guest writer for Yorkshire Bylines.