This summer, the true magnitude of the government’s mishandling of the pandemic and Brexit is becoming clear 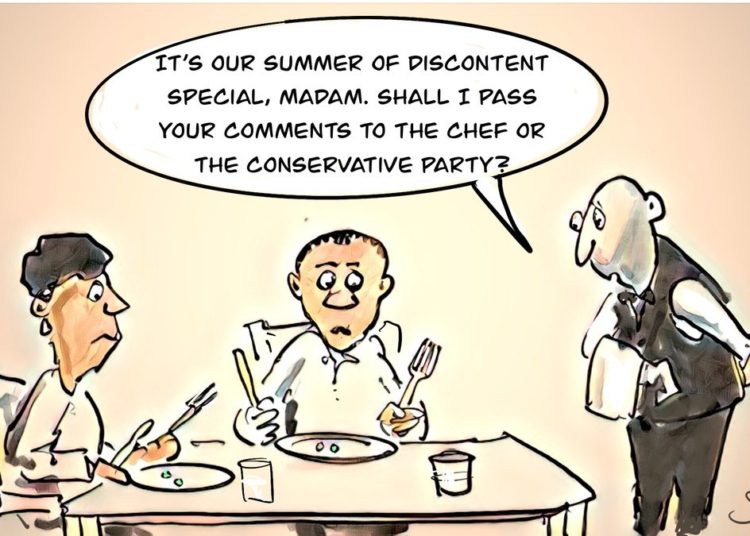 The House of Commons packs up today for its usual summer break, but many MPs may be wishing that they could stay and hide in London as the true magnitude of the government’s mishandling of the pandemic and Brexit becomes clear in their constituencies.

Is it pingdemic, pandemic or Brexit causing the shortages of food on the shelves? Or is it a combination of all three, with each being used as a distraction from the other?

Today’s headlines are about how entire supply chains are being disrupted by the numbers now having to self-isolate having been pinged by the NHS Covid-19 app. The massive increase in those being asked to self-isolate began after the European football finals, followed by a further increase a few days later with the lifting of restrictions. In the week to 7 July, the app managed to ping over 500,000 people, according to Sky News.

With this, a new word has come into the lexicon of the commentariat – pingdemic. According to I news: “the phrase is a play on words made up of the terms ‘pandemic’ and ‘ping’. It refers to being notified by the NHS Covid-19 app on your phone”. But the implication is that the problem is with the app, rather than the soaring case numbers, and both overlook the additional impact of Brexit on the supply chain.

The British Retail Consortium has stepped into the fray by urging the government to change self-isolation guidance to allow shop workers and suppliers to continue working even if pinged by the Covid-19 app. Sky News reports that Cleveland Police and Crime Commissioner Steve Turner has warned of the implications of shortage of frontline police with so many self-isolating.

Business Secretary Kwasi Kwarteng told this morning’s BBC Radio 4 Today programme that the government was planning to allow some key workers who are fully vaccinated to be exempt, saying “We are going to be publishing guidance today on who might be exempt”.

But let’s be honest, the soaring numbers is really a case of ‘no-shit Sherlock’. What on earth did people expect to happen after the scenes we witnessed during the Euro finals? ITV news quoted Covid-19 technical lead Maria Van Kerkhove as saying “watching transmission happening in front of my eyes”, as she watched the football crowds gathering around Wembley for the final a few weeks ago.

This was followed on 19 July by a substantial lifting of restrictions including no limits to the number who can meet, no requirement to wear face coverings and lifting of social distancing measures. So-called ‘freedom day’.

No wonder the British Medical Association was urging caution over the lifting of restrictions without appropriate protective measures, warning of a “devastating impact on people’s health, the NHS, the economy and education”.

So let’s get the story straight. The news is not that people are getting ‘pinged’ because of app sensitivities, but why people are getting pinged. At the heart of the news today is not a pingdemic but an ongoing pandemic. Whilst ever the media focus on the ping rather than the pan, then we are all in danger of thinking that the new danger is an app as opposed to a virus.

In fact, the real danger is this government. Increasingly the prime minister appears as a frightened rabbit trapped in the headlights of oncoming traffic. Unsure which way to turn he grasps for any quick route out of danger without really thinking through the consequences and without listening to those who may actually know more than him.

Anyone with a modicum of intelligence would tell you not to suddenly lift coronavirus restrictions just as case numbers start to rise. The app may be rubbish but it’s not the app’s fault (although let’s face it, Dido Harding has a lot to answer for). It’s the government’s fault for failing to see this was an inevitable consequence of letting us all off the leash when so many were not vaccinated.

It’s not all about coronavirus, it’s Brexit too

The other complicating factor is Brexit, which continues to wreak havoc on trade and supply chains. Last week Byline TV interviewed lorry drivers who were warning of major food shortages as a result of Brexit, with empty supermarket shelves coming soon. So it’s not necessarily, or not only, the pingdemic or pandemic that’s causing these food shortages.

A survey conducted for the Financial Times in June found that almost a third of British companies who trade with the EU suffered a decline or loss of business post Brexit and 17 percent of UK companies that previously traded with the EU have stopped.

Time will only tell what’s pandemic led and what’s the result of Brexit and the ridiculous decisions made by our politicians to come out of the single market and customs union. But one thing’s for sure – we will all, and have already, suffered. There are no sunlit uplands with this.

Meanwhile the news that both the Australia and New Zealand rugby league teams have decided to pull out of the World Cup tells you all you need to know. Citing player welfare and safety concerns, according to the Guardian, both teams will not be attending the event, which is being held in England at the end of the year.

And who can blame them? Take a look at our rising case rates, a track, trace and isolate policy that quite frankly has never worked from the start, and a borders policy that seems to actively welcome the virus. Experts in international law are even considering whether the UK can be taken to court for breaching human rights by allowing England to become a petri dish for a vaccine-resistant mutation and thus putting international lives at risk.

MPs may be off for the summer but they are not off the hook on all of this. Far from it. Indeed this latest confusion over self-isolating adds to the growing list of the prime minister’s woes. As nurses threaten industrial action over pay, a summer of discontent is looming.