The latest report by the public accounts committee looks at the true cost of the pandemic so far, including the cost of mistakes made. 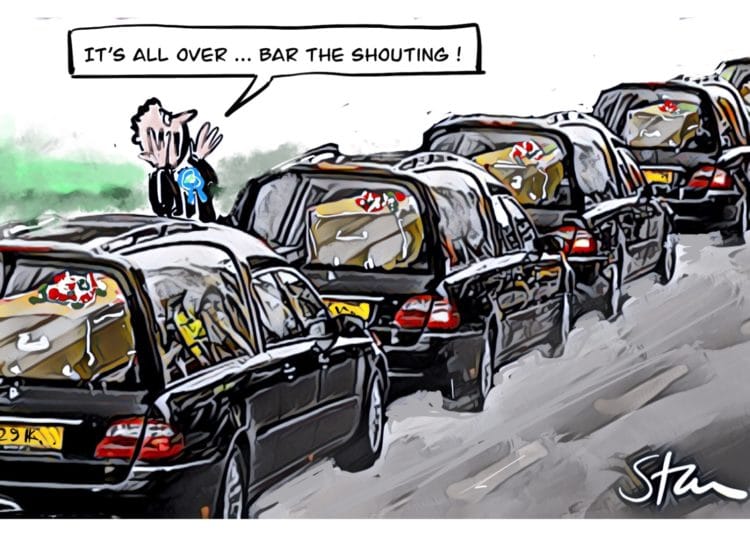 The number of new cases of Covid-19 appear to be declining and the government is keen to stress that the pandemic, or at least the ‘pingdemic’ will soon be over. But over the weekend, two reports were published from the public accounts committee that give significant cause for concern. While infection rates might be heading in the right direction, the financial cost of the pandemic – and the government’s mishandling of the response – is still emerging.

Announcing that it was “nailed on” that the “pingdemic” will end on 16 August, Prime Minister Johnson confirmed that from that date all double jabbed people will no longer have to isolate even if they come into contact with the virus.

Meanwhile, this week a story emerged that school teaching assistants and dinner ladies are being asked to cover staffing shortages in East Riding care homes as staff fall sick or are asked to isolate. According to the Hull Daily Mail, an email from East Riding Council to a school staff member said, “the incidence of Covid and the number of people having to self isolate is increasing .We wondered whether some of your term time staff, such as teaching assistants or lunchtime assistants, might be interested in working in our care homes over the summer”.

But it seems that for the prime minister, it’s now full steam ahead. Yesterday he told Nick Ferrari on LBC that, “We have the highest proportion of vaccinated adults in any country in the world that is enabling us to make the economic progress that we are … There will still be bumps on the road, but I think you’ll see a story of steady economic recovery and perhaps quite fast economic recovery as well”.

The reality is somewhat different and at present, the bumps seem far more evident than the recovery. The public accounts committee reports in particular tell a rather less positive story.

The first report, the rather sexily titled COVID 19: Cost Tracker Update, is an attempt to track and trace the costs associated with the government’s response to the pandemic. Since March last year, the National Audit Office has been collecting and publishing information on the government’s Covid-19 response measures with a response published in September 2020, then updated in January and May 2021.

According to the BBC, the report said the taxpayer would be exposed to “significant financial risks for decades to come”. It is estimated that the cost of the government’s response already exceeds £372bn.

What is perhaps more damming is the level of risk that the government has taken by relaxing some of the rules around spending decisions. The report acknowledged that departments faced difficulties in responding quickly to the pandemic but said “these risks did not always achieve good value for money. This is particularly the case in the estimated £92 billion of loans guaranteed by the government as of May 2021, £26 billion of which we we’re alarmed to learn are now expected to be lost as a result of bad loans to businesses although the exact scale of loss is not going to be known for some time”.

Point 5 of the ‘conclusions and recommendations’ covers the loan schemes the government launched to allow businesses access to funding quickly, currently estimated to be around £92bn:

“Government guaranteed these loans by up to 100 percent of their value in order to compensate the private sector for an increased risk of borrower default. Government currently estimates that the calls on these guarantees may amount to as much as £26 billion.”

Public money many never be recovered

It’s clear that the Treasury hasn’t got a scooby doo if this money – from the public purse – will be paid back. Or to put it in government speak: “HM Treasury expects all loans to be repaid but accepts that there is a high degree of uncertainty around this, as the repayment profile will depend on the strength of the economy and of the underlying businesses.”

There are other nuggets. The BBC says, “According to the report, there were 10,000 shipping containers of PPE still to be unpacked as of May this year”. This stockpile costing about £6.7m a week to store, with MPs saying the potential waste levels are “unacceptably high”.

Initial lessons from the government’s response to the pandemic

The second report published on Sunday from the Public Accounts Committee Initial lessons from the government’s response to the COVID-19 pandemic is equally damning:

“As of 7 June 2021, 2.1 billion items of PPE had not passed the initial quality assurance for use in medical settings, representing 6.8% of the items purchased.”

If this government was a business it would be filing for bankruptcy by now.

The government has not followed basic business principles. And it has not published relevant cost-benefit analyses or the data and statistics needed to explain key policy decisions. The committee claims the government has failed to publish the details of contracts awarded during the pandemic in a “timely fashion”, citing that of the 1,644 contracts awarded across government up to the end of July 2020 with a value over £25,000, 75 percent were not published within the 90-day target.

This report is also a reminder of how we went into this pandemic and the long shadow that austerity measures have cast over an overstretched NHS.

As the start of the pandemic the NHS estimated there were about 40,000 nursing vacancies and 9,000 vacancies for medical staff. By December 2020 it had nearly 89,000 full-time equivalent vacancies across secondary care settings in England.

“Longstanding staffing issues and backlogs, arising from failures in workforce planning and recruitment, have exacerbated the impact of the pandemic not only on the public, but also on the health workforce. The NHS. We are concerned about the impact of the pandemic on the mental health of key workers and burnout levels, which may result in more individuals leaving the medical profession and even higher vacancies rates going forward.”

Risk management and risk planning appears to have passed the government by. Worryingly, “between £2.1 billion and £4.2 billion of employment support payments may be due to fraud and error. Similarly, between £16 billion and £27 billion in loans from the Bounce Back Loans scheme may not be repaid”, claims the report.

These sums are eye watering. But more importantly, nowhere in either of these reports is there a sense that the government has got a grip on the financial management of this pandemic. The bluff and bluster that Johnson relies on is starting to wear thin. A summer of discontent is upon us, but autumn will provide the real wake-up call, when the true cost of this pandemic, and the failure to manage it, becomes apparent.