Jane Thomas examines the impact of the vaccine bounce on the political divides in the UK, will these only be temporary? 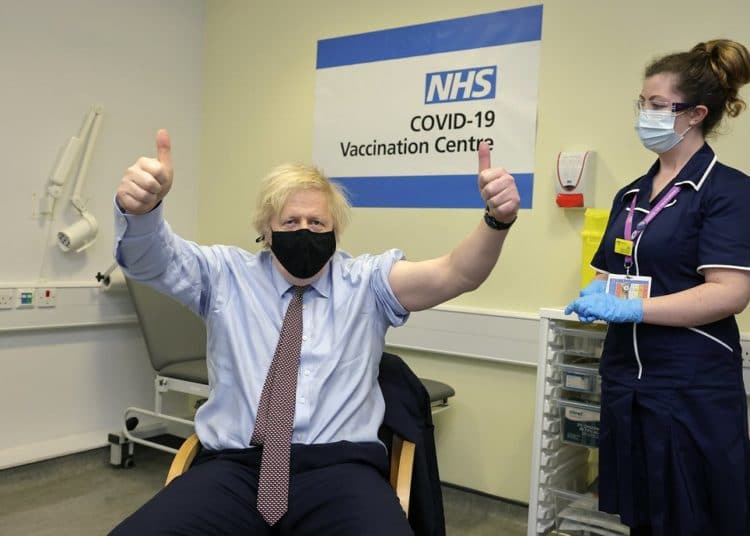 The vaccine bounce that Boris Johnson is enjoying is being borne out in the polls, with the latest Opinium poll showing the Conservative lead expanding to 45 percent (+4) versus 36 percent (-1) for Labour, the biggest lead since May 2020. This is worrying for Labour who are struggling to cut through.

Yet the Tories should not be complacent, because if this is down to the vaccine then the bigger question is – what’s Johnson got up his sleeve to keep his popularity rating once we’re all vaccinated? And the answer is – not much.

How has the vaccine bounce impacted polling?

Approval of the government’s handling of the pandemic overall is positive, with 44 percent saying they approve, against 36 percent saying they disapprove. Similarly Johnson’s approval rating has overtaken Keir Starmer’s for the first time since May 2020. Approval of the job Johnson’s doing has increased by six percentage points to 45 percent over the past fortnight, while 38 percent disapprove (down three points).

Undoubtedly this is all linked to the speed and efficiency of the vaccine roll out. The Opinium poll notes that approval for handling of the vaccine rollout remains incredibly strong, with 72 percent approving and only 8 percent disapproving. This approval is equally strong amongst Labour voters (71 percent) and has support from the Conservative-sceptic SNP voters (57 percent).

It’s apparent how much Johnson’s fortunes, and that of his government, are linked to the pandemic. The YouGov tracker shows his approval ratings declining the longer lockdown dragged on, but then bouncing back once vaccinations started. As John Curtice notes, “Much of the rise and fall in Conservative fortunes during the last twelve months has mirrored voters’ evaluations of its handling of the pandemic”.

This has been aided and abetted by the recent brouhaha between the UK and the EU over vaccine supply. A recent Deltapoll survey for the Mail on Sunday appear to show how much Johnson’s poll ratings were boosted over the so-called ‘vaccine wars’ with the EU.

The poll, conducted 25–27 March with a weighted sample size of 1,610 adults, showed both the extent of the approval there was for Johnson’s stance with the EU Commission over the vaccine, and how this antipathy towards the EU was affecting views on Brexit.

A significant 54 percent thought the European Commission was wrong to propose tougher controls on vaccine exports to the UK and just 24 percent thought it was right. When asked if the disagreements between the UK and the EU over this had changed their view on Brexit, 32 percent confirmed it had made them more in favour Brexit with only 10 percent saying less so.

Brexit on the vaccine bounce

When it comes to Brexit, not much has changed. There is neither a Brexit bounce nor a dramatic change of heart from the referendum outcome of 2016. The latest YouGov poll for The Times shows only a slight improvement for those who wished we’d remained in the EU, with 41 percent thinking we were right to leave and 45 percent thinking we were wrong.

The WhatUK Thinks project has been tracking attitudes to our exit from the EU. It makes for interesting reading, showing in particular the divergence in Scotland on attitudes towards Brexit. And it explains Labour’s difficulties in getting cut through. The strategy of accepting Brexit (indeed NOT mentioning it) is yielding little in terms of making inroads into Tory votes.

So Johnson could be forgiven for having a spring in his step. No one, it seems, wants to talk Brexit, least of all the Labour Party. And that suits the government just fine, because let’s be honest, there are precious few successes to talk about. But what will we talk about once we’re all vaccinated? And how will the Tories sustain their lead?

The challenge to the red, and the blue wall

The challenge will come sometime in the early autumn, as the government grapples with post-pandemic recovery and levelling up, whilst battling to find new trade deals to replace the old ones we had through the EU. There will be no vaccine bounce, just a need to show what recovery looks like.

Retaining the 2019 new ‘blue wall’ seats is becoming of even greater significance to the Tories, as they bleed votes in Scotland. And this is where the double impact of Brexit and the pandemic is keenly felt. Think in particular of seats like Grimsby (fishing), Scunthorpe (steel and chemicals) and seats around Leeds (financial services).

Unless Chancellor Sunak has access to a magic money forest, there will be no easy recovery for these former red wall communities. The more the pandemic continues, the more evidence that this is hitting the poorest communities hardest. And the Brexit dividend is proving elusive.

Brexit promises are quietly being swept under the carpet, because of problems with delivery. Where are the government ministers bigging up the sunlit uplands around immigration, fishing, better trade deals, or security and counter-terrorism? The only thing Johnson can resort to is sovereignty, but that’s such an emotive concept. And it raises the question of sovereignty for whom – not parliament, Scotland, Wales or Northern Ireland.

So just what will the bounce be after we’re all vaccinated?

It’s hard to see where recovery will come in the ‘red wall’ – and if we experience a resurgence of the virus, then the government really will have a problem. Levelling up funding so far isn’t always going to where the need is greatest, wages are stagnant, and some local authorities are in danger of going bankrupt. The divide between the haves and the have nots continues apace.

Strip away government policies and there’s no substance. For the time being, the pandemic is masking just how little attention the government’s paying to the real needs of the nation and ignoring what’s needed to keep the union together. And it’s masking the impact of Brexit big time.

But at some stage as we all get vaccinated and move on from the pandemic that mask will slip. And it will reveal that the Tory support is fragile, resolutely English, and up for grabs.