Dido Harding, former Test and Trace supremo, has indicated that she wants the NHS top job when it becomes vacant next month. 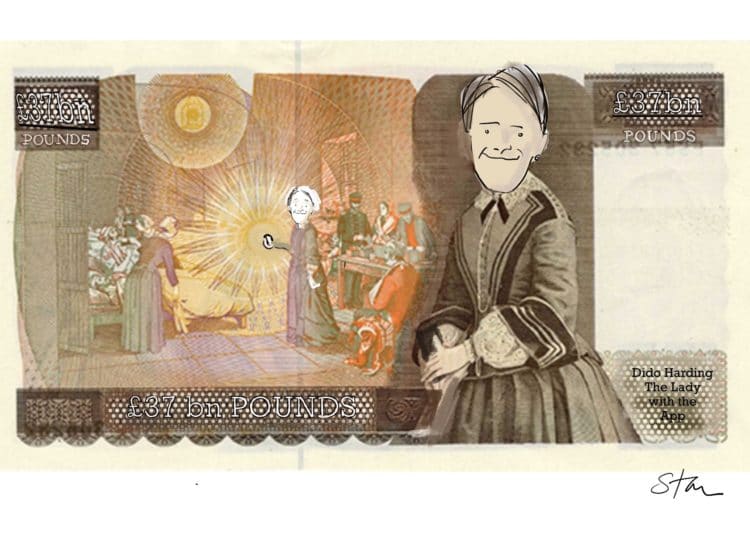 I’ve been asking people connected to Test and Trace how they rate the outsourcing companies that were put in charge of the scheme. Here’s a quote from the woman at the very top, Dido Harding: “You only have to be a patient or the carer of a patient for 10 minutes to see how money is being wasted. We could be more efficient and at the same time deliver better outcomes.”

Unfortunately, this doesn’t signal a belated trip along the road to Damascus for the Baroness. The organisation Harding was deriding wasn’t Serco, or Deloitte, but the NHS itself. Her pronouncement came during her first speech in the Lords after being appointed as head of NHS improvement, an occasion she chose to mark by accusing the health service of providing poor value for money.

Apart from highlighting the double standards of a multi-millionaire happy to accept £550,000 for two months’ work, why does this matter?

Well, following the shortest of breaks from supervising “the most wasteful and inept public-spending programme of all time”, the former Test and Trace supremo has let it be known that she fancies a bash at heading up the entire NHS when the post of chief executive becomes vacant next month. That’s a scenario that would see outsourcers rubbing their hands in glee while the rest of us rub our heads in disbelief.

For a woman irritated that taxpayers’ money is wasted on a free-at-the-point-of-delivery health service, Harding has a remarkably relaxed approach to the £billions splurged on the failed system which she presided over. During an interview for Radio Four’s Woman’s Hour she refused to apologise for any aspect of Test and Trace, suggesting that the only real problem with the operation was that people’s “expectations were set too high”.

This attempt to manipulate the narrative could have been taken straight from Donald Trump’s guide to self-justification. Coming from a woman whose background is in retail, it’s also a worrying approach to after-sales service. Imagine watching rain pour through your expensive, new roof while the builder (Dido & Sons) explains that it’s actually your expectation of staying dry that’s causing the problem.

The reality is that Test and Trace missed every one of its targets. A system the prime minister promised would be ‘world beating’ was condemned by his own scientific advisory group for emergencies (SAGE) as “having a marginal impact on transmission”.

The public accounts committee said Test and Trace couldn’t claim to have made “a measurable difference” and that “the promise on which this huge expense was justified – avoiding another lockdown – has been broken, twice”.

Recently, ministers wanting to avoid questions about premature boasts and late lockdowns, have taken to muttering about a far-off enquiry which they don’t want to prejudge. But when they see a chance to rewrite covid history, they grab the nearest microphone.

So, the health secretary’s guarantee to test every patient sent to a care home has become something we all misheard, and those doctors using bin bags as personal protective equipment (PPE) were all making a fuss about nothing.

From cuddling up to wealthy backers in the jockey club, through links to firms awarded covid contracts to transparent attempts to gloss over their mistakes, where Hancock leads, Harding follows.

The Baroness and her promotors can’t afford to admit that outsourcing a crucial element of the nation’s health care has been a disaster, because that’s exactly what they plan to do with the rest of it. The numbers of the firms that never came close to matching what local health protection teams achieved, are still in her phone – along with the consultants who were paid more than the prime minister. You can be sure that if she’s made head of the NHS, she’ll have them on speed-dial.

Campaigners are clear that lessons must be learnt. Pascale Robinson, from We Own It, told me that the Test and Trace system had been “a chaotic, disjointed mess”. She believes the reasons for this failure are obvious:

“From the beginning of this pandemic, the government has taken the disastrous approach of outsourcing much of the response to private companies that are totally ill-suited and have little to no experience … we need to end the privatisation of the pandemic response and put the NHS, primary care services and local public health teams in charge of Test and Trace.”

Unfortunately, for those who’d like stop it, Dido Harding is completely embedded in a government that has been selling off the NHS for years. She represents a philosophy that believes adding a layer of profit-taking intermediaries will magically improve any service. It’s the same mindset that came up with the ‘VIP’ fast-track route for PPE firms with connections to government, ensuring that even the deaths of tens of thousands of people can be an opportunity to make a fortune.

Dido Harding: the queen of outsourcing

If the queen of outsourcing thinks she is qualified to head up the NHS, then it’s a fair bet that what’s left of the service is in line for the Serco treatment. The people that gave her a peerage don’t hate the NHS, they just hate the parts of it that no one’s making money out of.

It upsets what they see as the natural order of things. After all, Test and Trace has been spectacularly successful in at least one way: it has transferred billions of pounds from the public purse to private pockets.

If the woman who stood by and applauded this appropriation is put in charge of the whole shebang, then we can look forward to the Baroness explaining that the reason we didn’t get our hip operation, or our turn on the dialysis machine, was because we’d set our expectations too high while wiling away the hours in the waiting room.