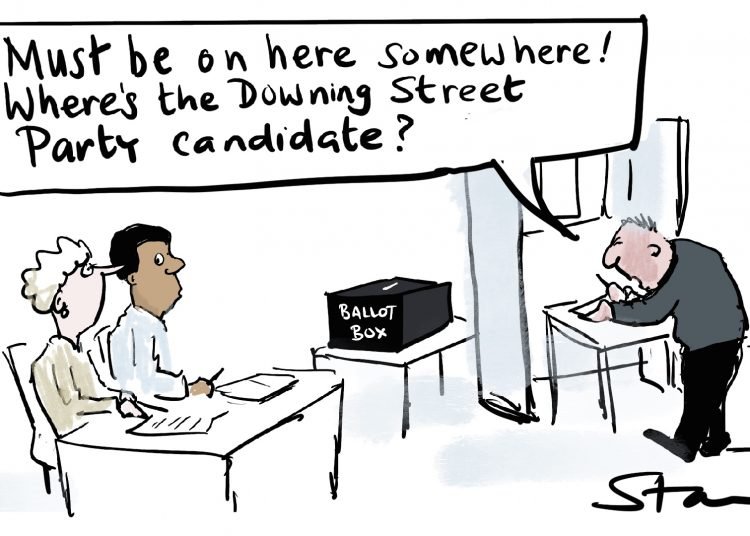 One of the few things that was good about lockdown was the sense that we were all in it together. The vast majority of people followed common sense rules and agreed to comply with a whole series of restrictions on their lives that were genuinely very difficult. Only a few anti-social individuals chose to ignore those rules.

Unfortunately, several of the most irresponsible rule breakers were at the heart of government.

The first to be exposed was Dominic Cummings with his notorious trip to Barnard Castle to test his eyesight. Everyone else was expected to stay at home, but the government’s chief adviser and the formulator of many of its central policies decided that the rules on travel didn’t apply to him.

Then it turned out that the health secretary who was advising us night after night to social distance and to restrict ourselves to meeting with a very small bubble of people was having an affair that involved a great deal of physical contact with someone outside of his own bubble. A simply staggering level of hypocrisy that led to Matt Hancock’s resignation.

Now we discover that when we were all told that we had to restrict our Christmas celebrations with only a couple of days warning, Downing Street was organising a drinks party that saw a crowd of people gathering indoors. Exactly the kind of social gathering that so many of us missed out on with so much regret. The prime minister, who had promised us for weeks that Christmas wouldn’t be cancelled, proceeded to cancel it for everyone else but won’t tell us whether he personally joined a party at his own home.

If that wasn’t bad enough it has also emerged that while many of us were volunteering to help friends, neighbours and relatives to get through those difficult days with no thought of personal reward, great chunks of the Conservative party were focusing on how they could line their own pocket. Contracts were being issued to friends and business associates for extraordinary sums of money. Much of which produced little or no impact on the pandemic. It simply managed to enrich those who were on the receiving end of generosity with other people’s money.

The sum of money spent on test trace and isolate systems exceeded £37bn. Those systems never worked properly and to all intents and purposes, they completely fell apart when the prime minister irresponsibly told everyone at the start of the summer that he was now declaring “freedom day”. Much of the procurement of personal and protective equipment was also mired in corruption and incompetence.

Those who had collected billions for delivering services that never worked should be hanging their heads in shame. Those who put out the contracts to obvious tricksters should be sacked. Instead, the corruption and incompetence at the heart of government lurches on from scandal to scandal.

Jacob Rees-Mogg adds to the scandal

The extraordinarily wealthy Jacob Rees-Mogg retains the place in government that he secured by leading the extremist wing of Brexit fanatics. Despite taking money from one of his many company accounts in the form of cheap loans and failing to declare it.

Imagine what would happen to anyone you know personally if they took out a £6m loan from a company they worked for and tried to avoid any scrutiny about the arrangement. Then weep for our country as you contemplate the determination of our prime minister to protect the smuggest person ever to hold office in the past couple of centuries from proper independent scrutiny and punishment.

Rees-Mogg may or may not have technically broken the rules, but he has clearly driven a coach and horses through them. Which we might have expected from a man who belongs to an era when that was the main mode of transport.

Cynicism on this level eats away at the spirit of a nation. When the country’s leaders so blatantly focus on enriching themselves at the expense of others it destroys public trust. How can we expect people to behave decently and obey rules that keep us all safe if the top people in the country think they are too powerful and important to bother obeying their own rules?

This isn’t a case of one bad apple or a few minor advisers making mistakes under the extreme pressure of an urgent crisis. This is a case of systematic exploitation of opportunity at a time when the vast bulk of the rest of the country was behaving with heroic responsibility.

Removing Johnson from power might begin the process of cleaning up the stench that comes from placing an utterly irresponsible liar at the head of government.

Removing the whole shower of his loyal followers would do more. Yet I very much fear that it is going to take a lot more than replacing corrupt business as usual with honest and efficient business as usual if we are going to restore public trust in British politics.