The Troubles and Brexit have greatly impacted young people in Northern Ireland; Westminster ought to do more to maintain peace in the region. 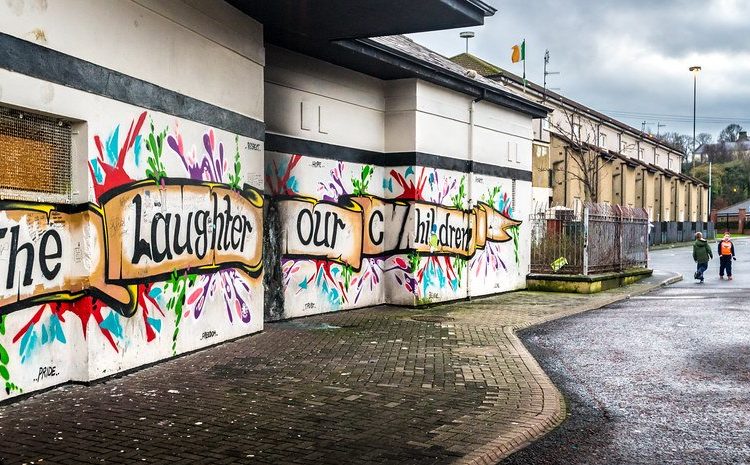 "The Laughter of our children, Bogside, Derry, Northern Ireland" by Giuseppe Milo (www.pixael.com) is licensed under CC BY 2.0

A decade ago, as part of a small team reviewing the youth justice system on behalf of the Northern Ireland Assembly, I spent many months in Northern Ireland learning about the criminal justice and children’s systems and the impact of the troubles on young people’s lives and behaviour.

As well as speaking with representatives from a range of organisations and different sides of the sectarian divide we spent many nights with the police on patrol and with community leaders, volunteers and youth workers on the streets. We spent days talking with young people in the community, in the youth centres, in prison and in secure units.

The impact of paramilitary violence on young people in Northern Ireland

There is no young person in Northern Ireland unaffected by the troubles. Not only does its history live within its people, but almost every young person will have had a relative involved in or hurt by the violence. Paramilitary violence has not ended, although it is much reduced and hangs as a shadow over young people’s lives.

People were anxious to tell us about how life had improved since the Belfast Good Friday Agreement (GFA) but also how much more still needed to be done. Peace was fragile. The ‘peace dividend’ had not yet translated into jobs for young people leaving school and the city remained divided.

The paramilitaries still exerted pressure on young people to join while punishment beatings and expulsions to the UK mainland continued. Older youths and middle-aged men made petrol bombs and left them in piles on street corners for children to throw during the ‘marching season’ and encouraged them to do so; much as we have seen on the news over the past couple of weeks.

While rioting was dangerous for everyone, including the young people themselves, it was also great fun, and life for young people living in their segregated estates was less so.

Many were trapped in their communities unable to afford the bus fares out and unable to walk beyond the ‘peace walls’, fearing for their safety. There were few facilities for young people and they often just ‘hung-out’ on the streets hoping something better might turn up.

Almost all the young people we spoke to, including serious and chronic offenders, wanted a well-functioning police force and criminal justice system. The paramilitaries were hated and feared and young people wanted the police to protect them and be the agency that dealt with them when they committed offences. But mistrust of the police also ran deep.

In some areas, community police, often led by local women commanders, had made sustained efforts to work with young people and had gained their trust but too often a ‘response team’ called to an incident lashed out in a heavy handed way and the all the good trust building work was undone. Mostly, the police patrolled the estates in armoured vehicles, watching but never engaging.

On the other side of this coin were women – often grandmothers whose own children had suffered from the troubles – and youth leaders, churches, local community groups, volunteers and neighbours.

All were keeping an eye out for young people, setting up youth facilities, organising trips out of the city during the marching season and during period of unrest, and intervening with the paramilitaries for them to be spared a ‘talking to’.

It is these volunteers and youth workers who will have been out, night after night, over the past couple of weeks talking to young people and trying to persuade them to go home.

Young people in Northern Ireland understand the reality of Brexit

Young people may not understand the complexity of Brexit or how the Northern Ireland protocol and GFA are inter-dependent. But they will understand that, in spite of all the rhetoric about the importance of the Union, the UK government has, once again, ignored their concerns until forced to take notice.

They may not appreciate the impact the removal of Theresa May’s backstop (which had support within Northern Ireland ) from the deal negotiated with the EU has had on trade friction between Northern Ireland and mainland UK, but they can understand empty supermarket shelves and the border in the Irish Sea.

The EU, the GFA and peace in Northern Ireland

Without the UK’s membership of the EU, the GFA might not have been possible.

For the unionists, membership of the EU enabled Northern Ireland to retain the exact same relationship with Ireland as the rest of the UK and it enabled republicans to be part of Ireland as the border dissolved. The EU provided the overarching framework within which both sides could peacefully co-exist without either side having to compromise beyond what was possible. EU membership was the unifier.

Within the EU, Northern Ireland flourished and it was one of the main beneficiaries of EU funding, receiving nearly £5bn in the last few years of our membership; money that the UK will never replicate. The EU was also largely responsible for a number of cross-border peace and trade programmes and promoting Northern Ireland tourism within Europe.

Westminster ignorance about EU membership and the peace process

Westminster has little understanding of the importance of EU membership to the peace process and has made very little effort to acquire it. As the Institute for Government found (when reviewing the Article 50 period):

And, just this week, a report by Oxford University’s Bennet Institute for Public Policy found that government failure, and unwillingness, to understand and adapt to devolution is directly responsible for the risks the union currently faces.

Those that understood devolution, such as Philip Rycroft (permanent secretary for the Department for Exiting the EU, previously from the Scottish government and one of the authors of the Oxford report) and Sir Mark Sedwill (then head of the civil service and No 10 and who helped devise May’s ‘backstop’) did not last under Johnson’s premiership.

Similarly, Julian Smith, the well-regarded Northern Ireland minister who gained the trust of both sides of the political divide and got them back around the negotiating table, was swiftly dispatched when he raised concerns about the impact of the Brexit withdrawal bill on Northern Ireland.

In the current circumstances, the government’s commitment to ignorance appears wilful and punitive.

Everyone I know who has spent time working or living in Northern Ireland retains a deep and abiding regard for the place and its people. The current catastrophe is not Northern Ireland ‘sliding’ back into the past, it is a Westminster government (with the help of its DUP allies) actively pushing it.