The belated news that wearing face masks is so important that we have to wait another ten days before it comes into force is another example of how we are being played by this government. 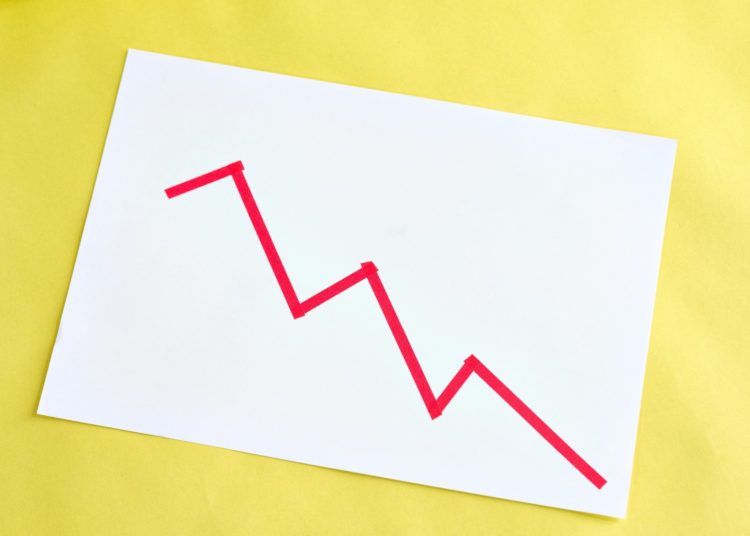 Downward Trend / Recession by danielfoster437 is licensed under CC BY-NC-SA 2.0

Interviewed by Andrew Marr last Sunday, Michael Gove said he did not think face coverings should be compulsory in shops in England, saying he trusts people’s common sense saying wearing a mask in a shop was “basic good manners”.

Fast forward a day later and we find that in fact the government has announced the compulsory wearing of face masks in shops. This reversal could be put down to a cabinet split (although there is no evidence of one) or new science (the science on masks has been around for ages) but I suspect this is more about a Cumming’s game plan.

If the news is bad then find some way of burying it. And what better way than creating a brouhaha about face masks? Suggest to the press that you are considering it, follow that up with a senior cabinet member saying it won’t be compulsory, and then announce it’s going to happen but not just yet. What’s just been created is a perfect storm where people are both confused and angry about the messaging – and the outraged have a good ten days (now nine) to create a twitter storm.

Meanwhile the real story of what’s going on in this country has the possibility of being lost in the noise created by those who think wearing a mask is an affront to their civil liberties (I guess they must take a dim view on dentists, health professionals, welders, farmers, decorators … the list is endless).

So, what is the real news? Well first, the latest Office for National Statistics figures published yesterday confirm what we already know about the size of the problem for the UK economy. The data incorporates revisions to monthly data from January 2019 and shows gross domestic product grew 1.8 per cent in May, but was still 24.5 per cent below its level in February.

Import and export levels remained low, but this should come as no surprise as the real test will be the monthly report showing activity for June and July. And whilst there is some evidence that some sectors of the economy are rebuilding, construction still remains at a substantially lower level when compared with March 2020. Total construction output in May 2020 was 38.8 per cent lower than the February 2020 level. No wonder Boris Johnson wants us to build, build, build.

Against the backdrop of last month’s warnings from the Organisation for Economic Cooperation and Development (OECD) about the scale of the UK’s problems, the latest news does little to dispel the economic gloom. The OECD added that if there is a second wave of the virus later this year, it expects the economy to shrink 14 per cent in 2020.

Undeniably all economies are affected but we have the added bonus of Brexit to contend with, putting even more pressure on a shrinking economy. And this brings us to the second bit of bad news that the government would like us to ignore.

Yesterday, Michale Gove issued a statement on the government’s preparations for the end of the transition period. It all sounded rosy – a £705m funding injection on top of an £84m grant already announced. This money (from that lovely big magic money tree growing in Rishi Sunak’s garden) will go to preparing the border infrastructure, developing IT systems, recruiting more personnel and building new border posts.

Of course, the devil is always in the detail and the Financial Times  wasted no time in explaining what that would mean for business – a cost of about £7bn a year for the estimated 215 million custom declaration forms needed by those importing and exporting. The cost for individual businesses will range from £20 – £56 for imports and £15 to £46 for exports.

To facilitate all this, an extra 50,000 private sector customs officials will need to be hired (very few have been trained as yet) and the government will need to put in place facilities to process freight going to and from the EU (yet to be built) and a new IT system. Given the fiasco over test, track and trace this last point is of significant concern. As my colleague Anthony Robinson has reported, the government has still not built its goods vehicle movement service (GVMS) IT system.

On 25 June, Tim Reardon, head of EU exit at the Port of Dover, gave evidence to the committee on the future relationship with the European Union saying, “We’re still at the stage of making sure the definition and the specification of the system is correct so it’s built with a fighting chance of doing what it’s needed to do.”

None of this is news though. The head of HM Revenue and Customs Jon Thompson told the Treasury select committee in May 2018 that “maximum facilitation” proposals (which would mean the UK would not have to follow EU rules on goods) could cost up to £20bn.

Taken together, all this is undoubtedly not good news – and however much Johnson injects fighting talk, and Michael Gove talks about “opportunities”, there are indeed not many reasons to be cheerful. And just as an aside for those who are used to popping across to the continent to stock up on booze and other items, from January anyone carrying goods worth more than £1,500 in a small vehicle will have to declare them using the red channel. So this will be a wakeup call for people with homes abroad.

The prime minister and his senior adviser may be hoping that the death rate continues to decline, that there is a better than expected improvement in the economy in the next quarter, and that somehow it all comes together magically at the border for 1 January. In the meantime, the plan is to create total confusion and hope the great British public fails to recognise what’s really happening.

The problem for Johnson and Cummings is that the costs of Brexit have already been committed and cannot be magicked away. They are real costs and they have to be found. And they continue to rise. Services and systems have to be in place – tried and tested and operational from midnight on 31 December – and there are only five months left to do it.

The pair were canny enough to call a snap election in December 2019. They knew Brexit was going to be bad and decided confidently that to get another five years from 2019 would mean that come the next general election the pain would have dissipated.

No one could have predicted the impact of coronavirus on the economy – and indeed on the country as a whole. Looking now at our current predicament, and with the possibility of a second wave of coronavirus, the decision not to opt for an extension makes no sense. The government will go into the first quarter of next year, and the budget in March, with an eye-watering deficit. The chancellor will be obliged to impose either tax raises or austerity measures. Good luck on that one, as some councils expect to have run out of money by then.

This is something that cannot be gamed. There is no “getting over the line” as in a referendum. The UK’s transition out of the EU is a process not an event, and it needs managing. And the public needs to have confidence that it is being managed well in the best interests of the country. So far, this is not what we’re seeing.

A perfect storm for predatory marriage