Helen Johnson questions how the Northern Ireland protocol will work. Britain will have to show full commitment and accept the agreement in order to benefit trade, business and borders. 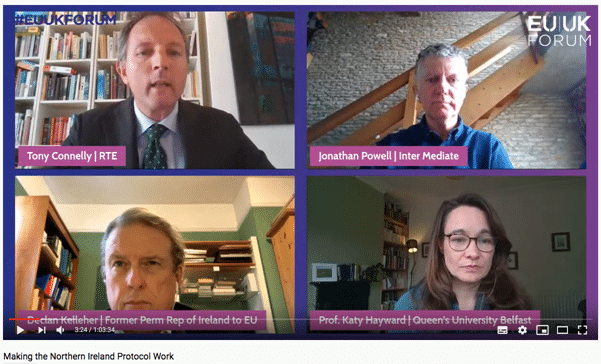 The Northern Ireland protocol was negotiated as part of the UK’s Brexit agreement with the EU. Through Northern Ireland’s continued adherence to EU trading standards, it avoids the need for a land border with the EU on the island of Ireland – which would infringe the Good Friday Agreement (GFA). However, this necessitates checks on certain goods entering Northern Ireland from Great Britain, which means there is a border of sorts in the Irish Sea.

This has created tension in unionist communities, who fear their UK identity is being weakened. Difficulties have also been experienced in trading goods between Great Britain and Northern Ireland. Violence broke out recently – horribly reminiscent of the period of ‘the Troubles’ – and the situation remains fragile.

Can the protocol work? This was the question posed in the latest in the online series of events organised by the EU∣UK Forum. Contributors were Declan Kelleher, former permanent representative of Ireland to the EU, Professor Katy Hayward) of Queen’s University Belfast, and Jonathan Powell, GFA negotiator as chief of staff to Tony Blair and now chief executive of Inter Mediate. In the chair was Tony Connelly, Europe editor of Irish broadcaster RTE.

The general view from the panel was that the protocol can be made to work but the impact of Brexit, the controversial nature of the protocol itself, and the current instability in Northern Ireland present real obstacles. Success will rest on two essentials being brought to bear, recently somewhat conspicuous by their absence: good leadership and pragmatism.

In Powell’s view, problems happen in Northern Ireland when British politicians are not paying attention, which happens all too often. Prior to the GFA, there had been an attitude of “it’s nothing to do with us”, but that changed with Prime Minister Tony Blair working with his Irish counterpart Bertie Ahern. Together they put their all into the GFA negotiations, devoting a huge amount of political attention and effort to it. They also held office long enough to see the process through.

In addition, wryly quoting Mo Mowlam’s colourful characterisation of Blair – “he thinks he’s f-ing Jesus” – Powell claimed that Blair’s belief in his own ability to sort things out was in fact key. He also paid tribute to the strength of leadership within Northern Ireland at the time, stating his belief that Martin McGuiness and Gerry Adams had put their lives as well their careers at risk. David Trimble and Ian Paisley had, he said, provided strong leadership on the unionist side as well.

This contrasts with what Powell now feels is a lack of attention and a lack of understanding on the part of the British government. He reminded us that at one point there was an apparent belief that the border between Northern Ireland and the Irish Republic was “the same as the border between Islington and Camden”. Leadership – or the lack of it – is also an issue in the Democratic Unionist Party (DUP) since the resignation of Arlene Foster.

Trust is also in short supply. Powell explained that while previous prime ministers had taken an even-handed approach to the Northern Ireland parties, the DUP now feel that they were “ditched” and betrayed by Boris Johnson.

Hayward believes there was a failure at UK leadership level to realise the effect that Brexit would have on border issues and the government now seems to be hoping the EU will turn a blind eye to infringements and allow things to go on as before.

The EU was also given a share of the blame for the current situation. In January, Brussels leaders were worried about vaccine shortages across the EU and suspected that stocks supplied to Ireland might make their way via Northern Ireland into Britain. To prevent this, they invoked Article 16 of the protocol. This article allows either side to suspend aspects of the Brexit treaty, in this case in order to institute checks by the EU on goods – vaccines – flowing from the Republic of Ireland to Northern Ireland, effectively creating a land border.

This was rescinded almost as soon as it had been threatened but Hayward and Kelleher both said it had been a huge mistake on the part of EU leaders. It served to bolster the unionist demand that the UK should itself be invoking Article 16 in order to dispense with the sea border formalities required by the protocol.

Pragmatism was at the heart of the GFA. Kelleher described its “genius” in dealing with short-term issues and pragmatically “parking” the long-term ones. The problem with Brexit is that it brings the latter into high profile and requires them to be solved.

Kelleher stressed that the border issue caused by Brexit was difficult enough in itself, but the rhetoric on the UK side made things worse. For purely domestic political reasons, issues that should have been approached practically and pragmatically were elevated to dogmatically ideological red lines, such as “No border in the Irish Sea”.

As Hayward explained, the ground was not prepared for the compromise involved in the protocol and the reality came as a shock. Consequently, the protocol is now “highly politicised and polarising” and has undermined stability in Northern Ireland.

Kelleher also drew attention to the different attitudes of Theresa May and Johnson to the political declaration accompanying the Brexit deal. Negotiated and regarded as important by May, this contained potential solutions to some of the problems we now face in trading products between Great Britain and Northern Ireland because of the UK’s and EU’s varying ‘Sanitary and phytosanitary (SPS)’ standards. However, it has been ignored by Johnson.

In the view of both Powell and Kelleher, if the protocol is to work, Britain will have to pay proper attention, with committed leadership from No 10.

Underlining the need for pragmatism, Kelleher said the UK government must accept and commit to the protocol and get on with the practical business of making it work, such as creating the necessary border infrastructure. The advantages of the protocol for Northern Ireland also need to be sold, as it does offer real investment opportunities. Hayward agreed but emphasised the need for unfettered access to trade with Great Britain as well as with the EU.

What would help with this, Powell noted, is if the UK would agree to accept the EU’s SPS standards. Otherwise, if divergence increases, trading conditions between Great Britain and Northern Ireland will worsen further, leading to a drift towards the creation of a united Ireland. Agreed standards would enable the necessary “light touch” checks for the protocol to work.

Outlook for the Northern Ireland protocol: tricky but possible?

So, in addition to relying on good leadership, successful implementation of the Northern Ireland protocol will require acceptance, pragmatic compromises, and stability. These are challenging conditions. Acceptance will require Johnson to acknowledge and sell the reality of what he signed up to. Pragmatic compromises will involve some acceptance of EU rules and stability is a fragile concept in Northern Ireland.

However, speakers at this event were tentatively positive that the protocol can work. Let’s hope so. It may be an unsatisfactory solution but, given the UK’s Brexit requirements, it’s the best on offer.