Lord Frost's appearance in front of the EU scrutiny committee yesterday sparked a lot of comments on Twitter - none of them complementary. 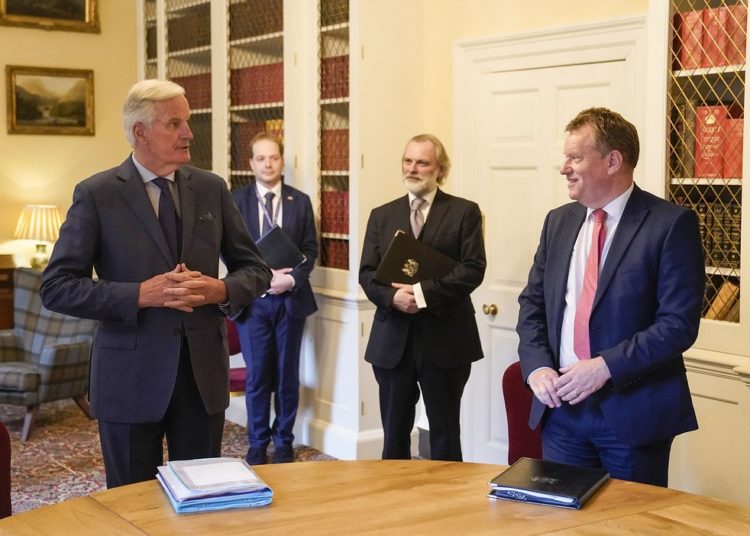 Lord Frost’s appearance before the curiously misnamed EU ‘scrutiny’ committee was something of an anti-climax. Most of the MPs who turned up were zealots to the Brexit cause. They appeared desperate to avoid seriously scrutinising him and tossed a series of softball questions which he gently returned with verbally incontinent non-answers.

As Rafael Behr from The Guardian tweeted, he ladled out an “indigestible word porridge”.

Most of the first 85 minutes was taken up with supportive questions from Sir Bill Cash (chair), Richard Drax, David Jones, Andrea Jenkins, Craig Mackinlay and Marcus Fysh – Brexiters all, who couldn’t have been more helpful to Lord Frost.

Margaret Ferrier, independent MP for Rutherglen and Hamilton West (she was SNP but has been suspended for breaching covid rules), seemed to have been caught up in the conspiracy. She asked the peer about his role in ‘strengthening the union’ (I am not making this up).

Lord Frost told her Brexit was “a huge opportunity for the whole country and the whole government to identify opportunities and take them forward”. She seemed satisfied with that, like somebody presented with a small smooth stone, silently turning it over and over to see if it they might discern some meaning from it.

If she did, she is a better person than me.

Where are those Brexit opportunities?

The government of leavers, after five long years and now with Lord Lister having flown the coop, was still apparently unable to define what these mysterious opportunities were and had decided to outsource it, presumably through a VIP channel and a single-bidder contract to a Conservative party donor. Joe Mayes, politics and Brexit reporter at Bloomberg tweeted:

It was almost as if they had embarked on Brexit without identifying what the ‘opportunities’ were or indeed if there were any at all.

At one point, demonstrating straw-clutching at its best, even the regulatory task force led by Iain Duncan Smith was mentioned as a potential source of those elusive ‘opportunities’. But since his little group (Theresa Villiers and George Freeman – don’t laugh) was supposed to report back to the prime minister last month, we can only assume the opportunities are perhaps not so huge and the three of them in the taskforce on innovation, growth and regulatory reform (TIGRR – get it?) are still feeling down the back of the settee.

That or the PM did get their report but has simply forgotten about it. I mean he’s a busy man.

Peter Foster from the Financial Times remembered Frost talking about being “hugely optimistic” about the forthcoming trade deals and, perhaps rather unkindly, reminded us of the government’s own forecast of the value of a trade deal with Australia:

Trade expert David Henig was puzzled by assurances from the noble Lord that trade with the EU had largely recovered from the ‘teething problems’ suffered in January and was pretty well back to normal (note: it isn’t). Henig had a follow up question:

It is a mystery, isn’t it? Trade with the EU is going as smoothly and frictionlessly as ever apparently under French and Dutch border officials but the exact same rules being applied to internal trade between Northern Ireland and Great Britain by our own people, is about to spark off civil disorder.

What can have gone wrong?

Frost admitted that the Northern Ireland protocol had a more ‘chilling’ effect then he thought – assuming he did think, that is. In some quarters there are doubts.

He was questioned by David Jones about having different standards to the EU and at the end of his rambling answer, talked about “the balance of advantages between going [sic] things our own way and errm … you know, taking into account what happens elsewhere”. He couldn’t bring himself to say the word ‘alignment’ or even with whom.

Frost on the Irish Sea “boundary”

In another Freudian slip, chairman Cash asked about the Irish Sea ‘border’ and in his reply, Frost talked about “the boundary, the trade boundary”. The word border never passed his lips. It was as if inventing a new word for border might sneak it past recently elected Democratic Unionist Party (DUP) leader Edwin Poots, and who knows it might.

Frost blamed the EU and the Article 16 fiasco in January for what he called some “unsettledness” in the province. Nobody questioned that of course.

Bill Cash reminds you of those Japanese soldiers emerging from the jungles of Asia in the 1960s. He is still fighting the last war and wanted to be reassured that the UK wouldn’t be tainted in any way with those nasty German DIN standards and that we would be “making sure that our standards are world-beaters and consistent with world standards and not just driven by those of the EU”.

On this point, I’m not clear what ‘consistent’ means. Either your standards are the same or they aren’t. However, Frost agreed and said there was an assumption that only two or three players like the USA, the EU and possibly China, really mattered in international standards. Something he thought was an “over-simplification” and that “we have some of the most highly regarded standard setting bodies in the world in the UK”.

Alas, like the opportunities, he didn’t actually define who they were or how the whole thing might play out living next door to the world’s pre-eminent standards setting super-power.

And neither of them explained how developing your own national standards would help anybody in the slightest. The BSI website asks: Why don’t we just have “British” standards for British businesses?

And then goes on to provides the answer:

“If every country had its own national standards, trade would be extremely difficult; agreement to use international standards promotes ease of trade, and can address issues that are of global interest, including product safety and consumer confidence, as well as good business practice.”

But then again, if you’ve already crippled your own industry with more red tape than you can shake a stick at, would it make much difference if we developed our own truly exceptional British standards?  We could then produce parts that don’t fit anywhere else in the world – just like us.