As Jonathan Bartley steps down from the Green party leadership, what should leadership mean in politics, and who we should look to. 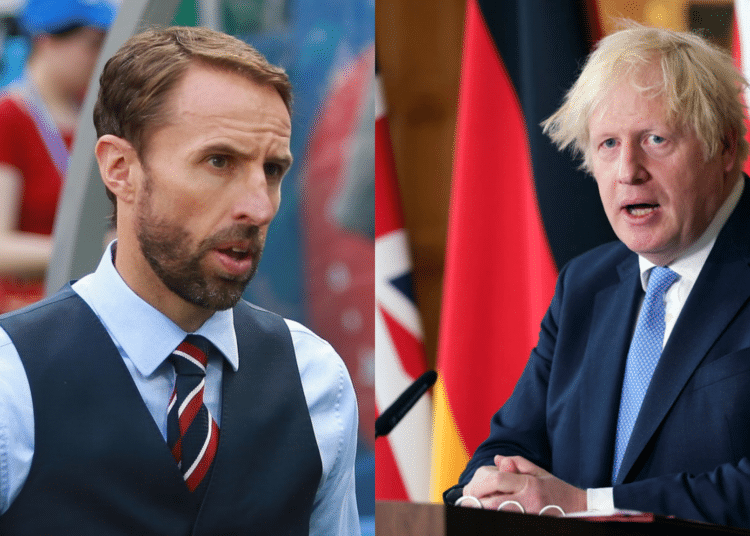 “Gareth Southgate” by soccer.ru for and “Prime Minister Boris Johnson meets with Chancellor Merkel” is by Number 10 is licensed under CC BY 2.0

The quality of leadership makes a huge difference to the success or failure of any organisation. As the recent successes of the England football team show and as anyone who has worked for a bad boss can tell you.

There are plenty of ways to get it wrong. Arrogance. Insisting on following daft theories regardless of reality. Lying so often that no one can trust the simplest thing that you say. Pushing staff to the limit and then failing to reward them properly. Placing trust in the wrong people. Only listening to those who tell you what you want to hear. Trying to be everyone’s friend. Claiming successes that are actually the work of others. Boasting. Sleazy behaviour that sets a bad example.

But enough talk of Boris Johnson. The track record of political leaders who are left of centre has also not exactly been impressive in recent times.

Much of the decline of British politics can be put down to Tony Blair. Many people placed their trust in him. When that trust was betrayed something turned sour and cynicism began to dominate. When a British prime minister tells you that weapons of mass destruction have been discovered which put our country at such a high level of risk that we must go to war it is important that he is telling the truth. He wasn’t. It is also rather important that when the government of the country boasts that it has put an end to the cycle of boom and bust it isn’t leading us into the biggest financial bust for 80 years. Whatever the causes of that crash a lot of the British public associates it with the end of the last Labour government.

The legacy of those two huge failures has caused real and lasting problems for the British Labour Party. That is one of the prime reasons why Jeremy Corbyn was elected leader. The party wanted a leader that was sincere, who had stuck by what he believed through thick and thin. Someone who didn’t need a focus group to tell him what to believe. The enthusiasm that was generated when he took over was genuine and people flocked in their thousands to join the party with real confidence that finally they might be about to be led in the right direction by a man of great personal integrity.

There are many competing theories about why that went wrong. My own is quite simple. Brexit. If your reputation has been built on being a clear honest and determined champion of strong values, it is quickly destroyed when you dither about and come across as if you are trying to say one thing to one side and another thing to another. Corbyn never quite made up his mind whether he was for Brexit or against it and that destroyed his single greatest asset. Trust.

It remains to be seen whether Keir Starmer is capable of restoring that trust. There have been times when his careful lawyer style of politics has looked as if it would cause Boris Johnson real difficulty as he steadily tore apart the lack of logic in his arguments. There have unfortunately been rather too many times during the covid crisis when he hasn’t seemed to know whether to go on the attack or offer support. Much the same is true about his approach to post Brexit politics. The jury therefore has to be heavily out about whether he is capable of uniting and inspiring an opposition movement that is capable of achieving victory. I’ve accused him of being dull without being worthy.

Leadership around the world – towards the cult of the strong leader?

The contrast with clear and capable leaders that have a clear vision of what they want to achieve is instructive. Not everyone likes Nicola Sturgeon’s politics. But she is an impressive leader. Angela Merkel is a right wing politician who winds up any of the true believers in Brexit something rotten. But they all know she is a strong woman who has led her country with real skill. Few reading this will like the direction of leadership of Nigel Farage. Yet, if we are honest, we have to admit that the far right has rarely had the advantage of a leader of his calibre. Just look at the mess that UKIP got into when they tried multiple times to replace him.

That last example goes to the real core of the problem with leadership. The cult of the strong leader is itself a very dangerous thing. As we have learned all too clearly with Donald Trump. In the end there is an argument for saying that you tend to get the quality of leadership that your society deserves. If you want a genuinely strong society or a genuinely strong political party then what is really needed is to build your strength from below. The thing that made the early Labour Party so impressive was not the wise leadership of people like Ramsey McDonald. It was the army of ordinary members who did exceptional work in their local communities to deliver useful practical services for the people they sought to represent.

The left needs leadership, but does it have to be a one-man (or woman) band?

The left can never expect to have friends in high places who will say nice things about them on the TV. It has to rely on having people who are trusted locally to fight the corner of the people that they live amongst. There is a resilience in building your base.

For smaller political parties this is something that they utterly rely on. My own party, the Greens, has taken this to the point where it tries hard never to have one single leader. We have a well-known stand out politician in Caroline Lucas, but she is not the leader of the party. Instead we operate with a shared leadership team.

One of our co-leaders, Jonathan Bartley, has now decided to move on and do a different job. He will be missed because he has proved really good at doing collaborative politics and he has put across a clear and consistent message with considerable skill. But he won’t be irreplaceable precisely because he has worked collaboratively. He has co-led an organisation that has the ability to grow and prosper and has helped position the party to be able to survive a leadership change without serious loss of direction.

If you wish to pass fair and reasonable judgement on the leadership of Boris Johnson it is only necessary to ask the question of whether it will be possible for the Conservative Party to say the same once he leaves. Or is it a lot more plausible to believe that the longer they are left under the leadership of his chaotic personality cult the harder they will find it to recover? And that unfortunately the same is likely to be true of the whole of our country.