Labour need to be seen as a government in waiting, with clear and focused policies. The new plan on work is a good start. 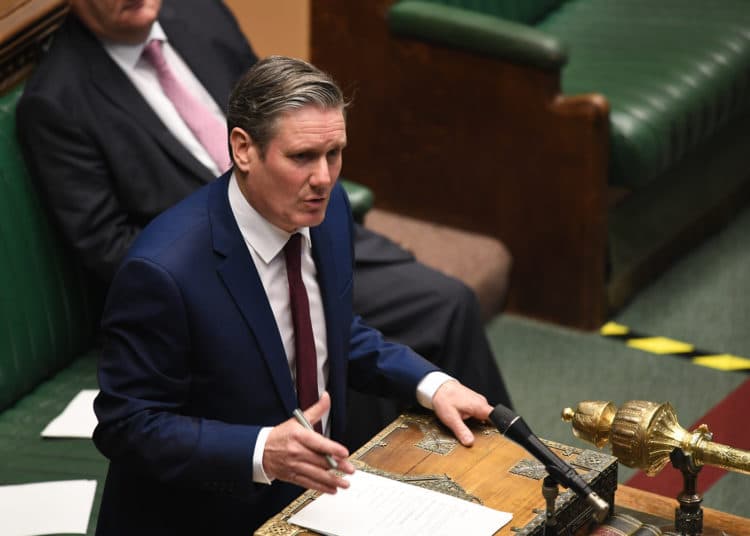 “Keir Starmer draws his battle lines for the next election”, reports Paul Waugh in the Huffington Post. For Starmer, he says, “This summer is a chance to make up for lost time, both in the pandemic and in his leadership”.

Labour plan to use the time to attack the Tories on crime and anti-social behaviour, an issue on which they believe the government to be vulnerable, while promoting their own plans for flexible working and workers’ rights.

The Labour Party has had success on crime before – Tony Blair’s ‘tough on crime, tough on the causes of crime’ line was a key part of his success in redefining Labour in the 1990s. Now, with the Police Federation announcing they’ve lost confidence in Home Secretary Priti Patel over their pay freeze, and police numbers still far down from their 2010 peak, Labour believe they have an opening.

Work has always been core Labour territory, and is arguably one policy area where they ought to find it easy to embarrass the government with promises to increase pay, security and flexibility in work.

Yet Labour have tried before and failed. Zero hour contracts, stagnant wages and rising insecurity were issues in the 2015, 2017 and 2019 elections, but still Labour fell short. In none of those election campaigns was the future of a work a significant issue, despite Labour on each occasion proposing significant benefits for workers.

The five principles announced by Starmer and his deputy, Angela Rayner will sound familiar to anyone who has followed Labour politics for the last decade, and arguably far longer. Security at work, quality jobs, a fairer economy, opportunity for all and work that pays are all laudable aims but could describe any Labour manifesto. There is little that’s new, even if the critique of workers’ challenges and the need for change remain as accurate as ever.

Two important factors should give the Labour Party and its supporters hope.

First, Labour have changed their messengers. Leadership ratings are generally seen as a better indicator of electoral outcomes than headline polls, yet Labour have repeatedly gone into elections with leaders who were significantly less popular than their Conservative opponents.

Second, the pandemic has made many people newly aware of the insecurity of work. The UK has the lowest unemployment benefit as a share of previous income in the OECD, even with the temporary £20 uplift to universal credit. We also have the lowest sick pay rate, a fact now widely understood following the publicity given to poorer workers who have faced the impossible choice of isolating at home if sick with Covid-19, or going to work to earn an income.

In 2015, Ed Miliband was less popular than David Cameron. In 2017, Jeremy Corbyn was less popular even than Theresa May. By 2019 he was the least popular leader of a major party since polling began. Starmer’s ratings are hardly outstanding, but with significant numbers of people yet to make up their minds, there is at least the potential for growth.

“When will we realise that without sick pay the ill must work?” asks the Resolution Foundation’s Torsten Bell. Two million low earners don’t qualify for sick pay at all. Even those qualifying only get £96 a week, just a quarter of their earnings on average.

Last March, says Bell, “I didn’t think it was possible we’d get a year through this pandemic without sorting out the UK’s inadequate sick pay system. It turns out I was wrong, providing another reminder that just because a problem is blindingly obvious doesn’t mean it’ll get fixed.”

Labour’s task is to capitalise on this new awareness of work insecurity, low pay and inadequate benefits to make the case for a dramatic change not only to our attitude towards work, but towards workers.

They may be helped in this by the fact that the pandemic has not only harmed the kind of workers who normally suffer during recessions – those already at the bottom of the pile and often with little ability to get much media attention. Many workers who would previously have seen themselves as unlikely to lose out in good times or bad have also struggled.

In part, this has been due to the arbitrary nature of the government’s support schemes. Most – but not all – permanent employees were able to access the furlough scheme. Some self-employed workers were covered by a scheme designed for them. Yet some PAYE workers (largely those employed after Rishi Sunak’s arbitrary cut-off date), many self-employed workers and all small and micro company directors (two million people) were left entirely without support.

Companies have been forced to shut down, people have lost savings, homes and futures. Work insecurity and poverty have spread from the poorest far up the income scale. Post pandemic, Labour have the chance to capitalise on this new sense that the world of work is unfair, and that the government is responsible.

If Labour are to succeed, they need to fix errors made by previous leadership teams. The party has had a tendency to issue blizzards of policy ideas, often in the midst of election campaigns.

In 2017, even the BBC summary of the Labour manifesto listed 14 separate work and employment policies, and that was but one policy area. In 2019, Labour announced a new set of policies on a daily basis, in most cases not returning to them before polling day.

In contrast, the Conservatives focused their campaign on getting Brexit done and a limited series of pledges on public services. Labour sorely need to define themselves in the public mind, and to do with a small number of relevant, memorable policies.

Labour’s new deal for working people has the potential to be part of that definition, if they’re able to capitalise on security fears stoked by the pandemic and persuade the public that they not only have the right policy ideas, but also have the competence to implement them.

Labour must maintain their focus

Allying their work pitch with a focus on crime is a smart move. Crime regularly polls among the top five issue facing the country, yet is often overlooked by Labour and the left. Given the Conservatives’ weakness on the issue – with rising crime rates, police service dissatisfaction with Priti Patel, and post-2010 cuts to services – Labour could make significant inroads.

To succeed, Labour will need to stick to their guns, repeat their criticism of government failure, and promote their own policies until the public take notice. The party will need to find ways to restore its economic credibility, and to help the public warm to Starmer’s leadership, about which many are still unsure.

Labour could be helped by Boris Johnson’s inadequacies and political drift in the government. Johnson’s recent speech on ‘levelling up’, intended as the centre piece of a post pandemic relaunch, was derided as vacuous even by his allies. Lack of progress on social care adds to the sense that the government is not only out of ideas, but divided and out of courage.

But Labour cannot rely on Johnson’s failure. He has come back from the brink before; most would agree that he is a better campaigner than governor. To win the next election, Labour will need to add further critique of Johnson and build the public respect. The party needs to be seen as a government in waiting. Labour’s new pitch on work is a good place to start.