Labour MPs and peers need to be very careful about supporting a deal which will inevitably result in blue wall communities suffering extra hardships. The government has a comfortable majority and there is no compelling need for Kier Starmer to support the bill tomorrow. Labour should keep their hands clean and abstain. 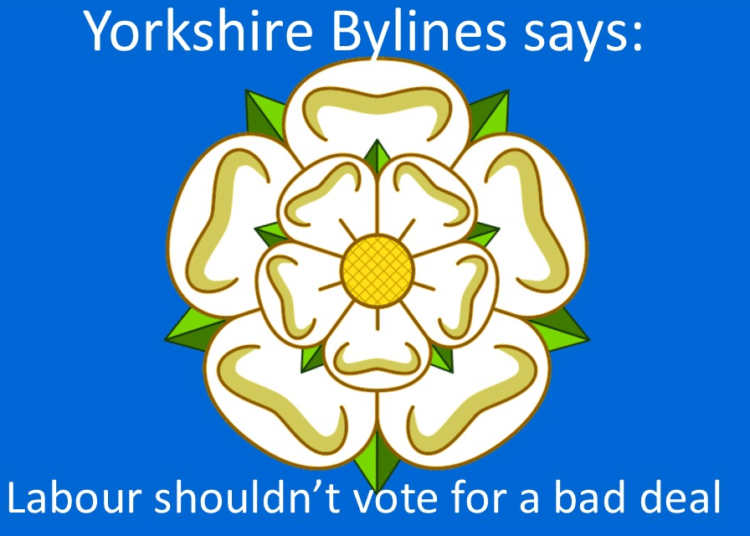 In 2018, Martin Donnelly, the former permanent secretary at the trade department, described Brexit as “swapping a three-course meal for a packet of crisps”. Looking at the newly minted Trade and Cooperation Agreement (TCA), he may now think a ‘few drops of thin gruel’ is more apt.

Labour is planning to support the government using logic that reverses Mrs May’s 2017 mantra: a bad deal is now apparently better than no deal. The party should think carefully before doing so. This is NOT a good deal. Not good for Yorkshire, nor for the country as a whole.

Firstly, the treaty does not need parliamentary approval. Governments alone have the right to agree international treaties and MPs will vote tomorrow simply on enabling legislation that will allow ministers to implement the TCA in British law. So, why risk being seen as an accomplice to the malign impact of this trade deal, when your support is at best only token?

The fact that ERG hardliners are set to approve the deal should be enough for Labour MPs to see they are in danger of unnecessarily associating themselves with the hardest possible Brexit, short of no deal.

Labour should decide if it wants to be complicit in what The Observer editorial last Sunday called one of the “greatest-ever deceits inflicted on the British electorate”.

When confronted with the bleak reality of Brexit, voters may soon realise how disastrous it will be for their communities. Many in the traditional red wall seats will expect this from the Tories, but will struggle to understand why Labour, their traditional party, has abandoned them. The new blue wall is built on shifting sands, every brick a lie; something Kier Starmer might want to reflect on.

The deal will be bad for Yorkshire. Outside London, Leeds is the largest legal and financial centre in the UK, in a sector accounting for nearly 40 percent of local output according to Leeds City Council. Yet there is no provision for financial services in the deal; none whatsoever.

Mutual recognition of professional qualifications is also absent. UK-qualified lawyers and architects from the county will be no longer be able to work across member states as they have previously done. And the loss of freedom of movement for our creative industries – in particular touring musicians – will be devastating. None of this was a necessary part of Brexit. All of it was the choice of this government.

Britain will be disconnected from the Schengen Information System (SIS), the most widely used and largest crime fighting tool in Europe. On average, British police access SIS 1.65 million times every day. Safety and security is being diminished by Tory dogma; it doesn’t mean Labour should support it.

Denying our children access to Erasmus – a programme that has enriched lives and from which the UK is estimated to make a net profit of £243m a year according to Universities UK – looks like Europhobia disguised as penny pinching. The replacement Turing scheme is a cheap and inadequate substitute.

Immigration-dependent sectors like agriculture and care homes, the latter already reeling from the pandemic, will suffer disproportionately from the lack of freedom of movement. Labour shortages in key services can only hamper our economic recovery. The flip side is that this Tory Brexit is denying the people of Yorkshire the automatic right to live, love and work in Europe. And continental travel for UK citizens is set to become far more cumbersome and costly.

None of this is even to mention the huge burden of paperwork about to be unleashed on Yorkshire exporters, many of whom are still unaware of how their competitiveness in the world’s largest single market might be suddenly crippled by bureaucracy in a few days’ time.

We are still approaching a cliff edge. The deal avoids falling onto the rocks, but only by landing on a narrow ledge half way down. Trade will be disrupted significantly: this is unavoidable, with a trade deal that is uniquely the first (and probably the last) to erect barriers rather than remove them. We will all pay the price in higher living costs, potentially lower workers’ rights, lost jobs, reduced health funding and even perhaps in the very food on our plates.

The deal sacrifices prosperity on the altar of sovereignty – a commodity which, much like patriotism, is the last refuge of the Eurosceptic scoundrels responsible for the looming disaster. The concept has now been elevated above the national interest and the wellbeing of every person in these islands.

Brexit brings to an end 47 years of close, mutual cooperation, of give and take with our European friends and allies. We may see over the coming weeks and months what the result of that will be.

Brexit is going to cost a lot and will take years to put right. From 1 January, the work to rebuild our relationship begins. The Labour Party needs to begin that effort with clean hands.

They should abstain tomorrow.

Be careful what you wish for: the reality of Brexit