The decision of Johnson to unilaterally break the UK’s legal obligations under the EU withdrawal agreement is an attack on Magna Carta itself. 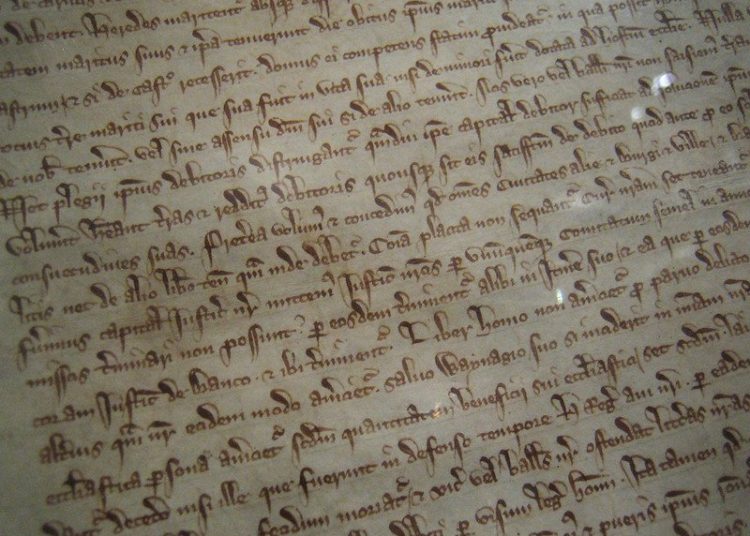 Copy of the Magna Carta held in the National Archives in Washington DC Magna Carta by maveric2003 is licensed under CC BY 2.0

Magna Carta is an iconic historic document, regarded by many as the foundation of the English constitution and the rule of law – in other words, the idea that the actions of governments (whether monarchies or democracies, and no matter how powerful) can be bound by written instrument (the law).

The decision of Boris Johnson, who has previously described Magna Carta as “the foundation document of freedom and constitutional government in this country,” to unilaterally break the UK’s written legal obligations under the EU withdrawal agreement and its Northern Ireland protocol, is therefore, in a sense, an attack on Magna Carta itself.

Magna Carta has a storied and influential history. Originally agreed to by King John in 1215 as a way of avoiding insurrection, he convinced the Pope to annul it ten weeks later. Once King John and the Pope died a year later, Magna Carta was re-issued somewhat altered in 1216 and several times subsequently, spinning off in the process its forest provisions into Carta de Foresta (the Charter of the Forests or Charter of the Commons). Given that the war that followed the annulment involved France alongside the rebelling barons and that the 1216 version was intended to quell that war, Magna Carta became more than just a domestic instrument.

Magna Carta and Carta de Foresta were more than theoretical declarations of principles: they were relied on for hundreds of years by English courts to invalidate overreach by the King. Magna Carta’s enduring influence can be seen across the globe. For example, a 1297 original is enshrined in the US National Archives in Washington DC, the document has been cited as an authority by the US Supreme Court and other foreign courts, and is even referenced in United Nations documents.

As Richard Corbett noted, Yorkshire barons were a mainstay of the Magna Carta barons, elected to enforce the Charter in 1215 against the tyranny of King John. They included William de Forz (Skipton), John de Lacy (Pontefract), William de Mowbray (Thirsk) and Robert de Ros (Helmsley). In the words of Professor Nigel Saul, they had “suffered at the hands of John and had a burning sense of grievance”.

King John’s failure to respect the law had triggered the Magna Carta rebellion that ended with the barons seizing London and forcing the King to agree to the Charter at Runnymede in 1216 – a concession that greatly restricted his powers. The 1216 and subsequent versions did not stray from that guiding principle – that the ‘Divine Right of Kings’ would henceforth by circumscribed by man-made law.

Although the text of Magna Carta changed somewhat over the years, and though it mythically came to imply doctrines such as trial by jury and habeas corpus (neither of which appears in any of the texts), two great overarching principles have remained constant, including in English and international law. One is that the monarch (and therefore the government) is under the law. The other is that a written and signed (or sealed) instrument, whether the Charter or any other instrument of national or international law, binds subsequent action.

With this last tenet in mind, it is clear that Boris Johnson’s push to break international law with his UK internal market bill is a direct attack upon Magna Carta itself. This is all the more shocking when one considers that Johnson has, in the past, written of the foundational importance of Magna Carta – for the British constitution and for rule of law. That constitution was forged in the civil wars and bloodshed that resulted from repeated attempts by autocratic monarchical government to place themselves above the law. Charles I was executed after the last of those bloody conflicts.

Although the time of revolution and civil war has long passed in the United Kingdom, the flagrant violation of its international legal obligations by the current Conservative government (a violation publicly acknowledged by a UK minister before parliament) remains a deeply shocking step to all of us. And its ultimate implication – that a government does not consider itself bound by a legal instrument it signed in good faith less than a year previously – raises exactly the same questions as those debated by kings and barons over 800 years ago, and exactly the same concerns and points of principle that led to regular bouts of civil unrest for the next 400 years.

In short, if a UK government can act with such contempt towards its binding international obligations, then the whole basis of the British constitutional contract between the government and the governed breaks down, as does any sense of trust between the UK and its international partners. As has been repeatedly noted by political commentators, such illegal behaviour also provides succour to the world’s autocrats in Moscow, Beijing, Minsk, Riyadh and elsewhere, who will surely seize on Johnson’s law-breaking to justify their own violations of international law.

If you listen carefully, you can almost hear the Yorkshire barons turning in their graves.