Johnson is consciously provoking the EU into either allowing the single market to be compromised by unfair UK trade practices, or taking appropriate steps to safeguard its external frontiers by instigating controls on Northern Ireland trade. He thinks that in doing so, he can then blame the EU for any ‘hard border’. 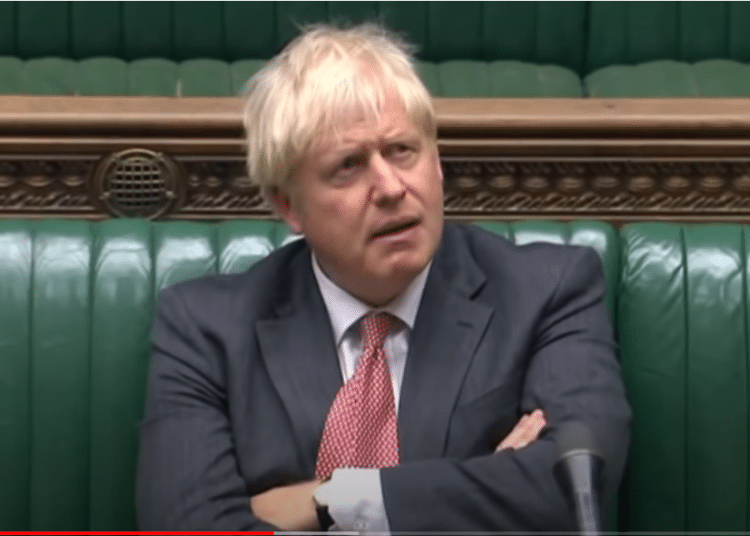 Michael Dougan is professor of European law and Jean Monnet chair in EU law at the University of Liverpool. He has provided expert testimony to the UK parliament. His briefing document entitled United Kingdom Internal Market Bill: Implications for Devolution provides a more detailed summary of the situation. What follows is a step-by-step explanation of what’s just happened in Westminster – an update on Johnson’s plans to destabilise Ireland and isolate the UK…

As we know, parliament is now considering whether to empower Johnson to override – directly and deliberately – two clear and precise legal obligations under the very withdrawal agreement he signed with the EU: controls on goods from Northern Ireland to Great Britain; and state aid rules in relation to Northern Ireland.

Those breaches of international law already risk provoking a range of very serious consequences, not least for Northern Ireland. After all, the state aid regime is necessary to prevent the unfair dumping of UK goods into the EU and is therefore an integral part of avoiding a ‘hard border’ across the island of Ireland.

So Johnson is consciously provoking the EU into either allowing the single market to be compromised by unfair UK trade practices, or taking appropriate steps to safeguard its external frontiers by instigating controls on Northern Ireland trade. He thinks that in doing so, he can then blame the EU for any ‘hard border’.

So, what can the EU do about it? The withdrawal agreement provides that, during the current transition period, all dispute settlement is done via the European Court of Justice (ECJ) rather than through arbitration. The European Commission can bring proceedings against the UK for the ECJ to deliver a binding ruling. If UK then fails to comply, the ECJ can impose financial penalties on the UK.

The problem is, this is still ‘just’ international law. The UK internal market bill, if enacted as the government intends, would authorise the Johnson regime simply to ignore any ECJ rulings or penalties against the UK. Ultimately, if the UK wants to provoke a full-scale crisis, the EU’s response would have to be political and diplomatic.

But just as important as what new bill actually says, is how the Tories are presenting it, along with the claims they are making to justify their international delinquency. Because those claims bear little relationship to the actual contents of the bill – they are a shocking example of outright political dishonesty and propaganda.

Johnson claims the EU is planning to prevent foodstuffs from Great Britain entering Northern Ireland, effectively imposing a “blockade”. He also claims the EU is insisting on an “extreme” interpretation of the withdrawal agreement that would require goods entering Northern Ireland from Great Britain to pay EU customs duties. Yet there are two very serious issues with Johnson’s claims.

More articles on this topic:

The first major issue is that this Bill wouldn’t actually do anything to address those alleged problems, since it does not empower the UK to disapply any of provisions of the protocol governing the movement of goods from Great Britain into Northern Ireland. So Johnson’s claims on this are totally irrelevant and misleading.

The second major issue is that the rules the EU is working towards aren’t “extreme” interpretations of the withdrawal agreement at all. In fact, the rules are completely clear and obvious. For example, the protocol explicitly states that ALL goods from Great Britain are presumed to be at risk of entering the EU, and must therefore pay EU customs duties, unless proven otherwise. The Joint Committee has the power to determine what counts as “otherwise”, but the rule itself is perfectly clear.

So, the problems Johnson is complaining about are problems he negotiated, signed, sold to the electorate as a “triumph” of his diplomacy, told his MPs to pass through parliament, and agreed with the EU as a matter of binding international law. For him to complain now is fundamentally indecent.

But the more serious worry is that, having made such a fuss about “blockades” and “extreme interpretations”, Johnson will now bring forward fresh proposals to authorise the UK also to breach those provisions of the protocol that govern trade in goods from Great Britain into Northern Ireland. If he does this, it will make the already difficult situation ten times worse.

Johnson would effectively be ripping up a treaty that seeks to protect Ireland (north and south) from the inherently damaging consequences of the UK’s decision to leave the EU, the customs union and the single market. This will make it as if years of complex and difficult negotiations never happened.

The EU would have little choice but to act, to safeguard its borders and protect its citizens. But make no mistake, the UK would be solely responsible for the creation of a hard border across Ireland that would directly undermine the Good Friday Agreement and jeopardise the peace process. And no amount of Tory propaganda could trivialise the situation (“Oh, but other countries break the law all the time…”) or fool anyone, save their own core fanatical and bigoted support base, that the UK is the injured party (“oh, the nasty foreigners have been bullying us…”).

So, Johnson has set this country on a trajectory that is as serious as it is shocking. It risks making the UK a threat not just to the rules-based international order that the UK itself helped to create, but also to peace and security in Ireland and therefore in Europe.

His actions are diabolical.

Michael is professor of European law and Jean Monnet chair in EU law at the University of Liverpool. He has provided expert testimony to the UK parliament and acted as fact checker for BBC Reality Check during the referendum. He is joint editor of the Common Market Law Review. In his spare time he plays violin / viola with the Liverpool Mozart Orchestra.