Kenneth Branagh is to play the prime minister in a sky drama, set during the pandemic. I’d hesitate to give such an outstanding Shakespearian notes, but he may wish to dust off his copy of Twelfth Night. In the steward Malvolio, he’ll find an arrogant character convinced that cavorting about in an oafish manner, preferably while wearing an outlandish outfit, will win him the approval he desperately seeks. 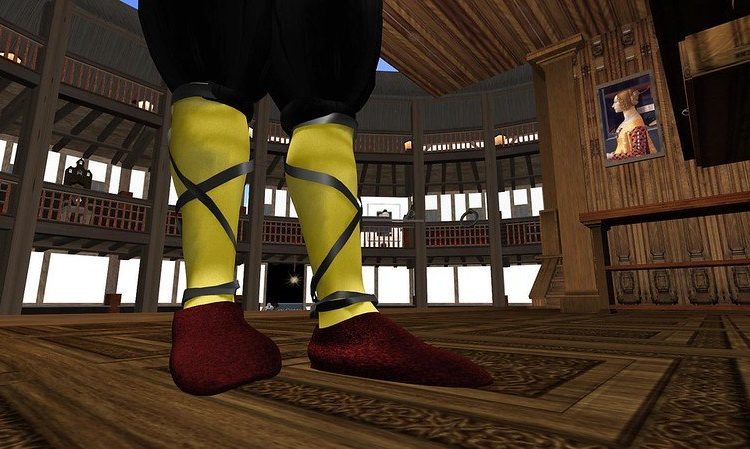 Malvolio in yellow stockings cross gartered by inacentaurdump is licensed under CC BY 2.0

So, Kenneth Branagh is to play the prime minister in a Sky drama, set during the pandemic. I’d hesitate to give such an outstanding Shakespearian notes, but he may wish to dust off his copy of Twelfth Night. In the steward Malvolio, he’ll find an arrogant character convinced that cavorting about in an oafish manner, preferably while wearing an outlandish outfit, will win him the approval he desperately seeks.

Malvolio’s yellow stockings and garters prove to be as inappropriate as Johnson’s high-viz jackets and idiot grins; the former confronted by a sister who is grieving, the later faced with an entire country doing the same.

Back in July 2019, when a few thousand members of the Conservative party saved the rest of us (for five months at least) the bother of deciding who our prime minister should be, they were convinced they’d chosen the right man for the job.

After all, lurking below his carefully unkempt fringe was the face of Brexit’s leading man. Who better to play the vaudevillian champion of the single issue that was going to win them the election, and who better to reprise the role endlessly in the months ahead, when leaving the EU was clearly going to be the only show in town?

Then, in January 2020, covid changed the script. Every death that’s followed has served to emphasise the country’s need for a leadership based on substance rather than showmanship and has left many of Johnson’s original supporters wondering if they should be holding auditions for an understudy.

Given their shambolic handling of the crisis, opinion polls showing the Conservatives neck and neck with Labour are probably more of a head-scratcher for those behind Keir Starmer’s attempt to appear more vanilla than a double-scoop cornet, than for Johnson’s recently revamped slate of advisers. More worrying for Team de Pfeffel, will be their man’s consistently low personal approval levels. Before the perceived lift from the “great Brexit deal”, and the feel-good factor injected by the vaccine, polls were showing the public’s confidence in Johnson standing at just 29 percent, lower even than Donald Trump’s immediately after his insurrection.

For months now, some Tory die-hards have fretted about the PM’s leadership qualities. Take Conservative Home, a website that likes to call itself the grassroots voice of the party. A visit to its pages can be an informative, if slightly queasy, experience for anyone who hadn’t previously thought of Jacob Rees-Mogg as a pioneering thinker, or of hungry school children as a drain on society. They publish a regular league table allowing party members to rank the performance of cabinet ministers, and it illustrates the extent to which they have fallen out of love with the MP for Uxbridge.

You’d expect a recently elevated prime minister to at least make the first three, but Johnson has consistently been placed closer to the bottom than the top. He was ranked a pitiful 19th out of 25 in August and in September only the friendless Gavin Williamson was keeping him off bottom spot. In the most recent survey, even the Brexit ‘deal’ barely dragged him into the top half of the list, which was headed for the second time by Liz Truss; yes, Liz Truss!

Johnson has always cultivated his image carefully. Everything from his adoption of a stage name to his apparent fondness for antiquated phraseology is cultivated to endear, but in the middle of a health crisis it simply enrages.

As a journalist he was keen to be seen as a provocateur, leaning heavily on the shock value of casual racism and the invented quotes that cost him his job. His limp biography of Churchill included so many transparent attempts to associate himself with the war-time leader that it made him a laughing stock, while his clumsy attempts to insert Latin phrases into his conversation are about as impressive as Del Boy’s French.

When they first cast Alexander de Pfeffel, the Conservatives expected that he’d simply have to carry on playing Boris the Enthusiast, hurling promises and bullish statements around. Any problems could be deflected with a bumptious exultation of the indefatigable British spirit and an accusatory finger pointed at johnny foreigner.

But the signs that this man couldn’t be trusted in a crisis were there from the start. One throwaway line in his acceptance speech warned party members that sooner or later they’d “wonder quite what they have done”. More ominously, at Greenwich just a month after covid was first revealed in Wuhan, his grandiose oratory paved the way for a disastrous herd immunity strategy based on the idea that Britain’s economy could flourish by staying open while others shut down.

Initially, party members were more enthusiastic for their new leader than many senior MPs. Always a divisive figure, the repositioning that saw Johnson roll up in the Brexit camp after “veering all over the place like a shopping-trolly” brought accusations of an opportunistic approach to No 10, while the fact that he intended to invite the “career psychopath” Dominic Cummings to join him in Downing street further alienated him from party grandees.

This acrimony, together with the need to reward some unlikely figures, partly explains the paucity of experience and knowledge in his cabinet. The names on the Conservative Home survey are a reminder of how shallow the puddle of talent at that level is.

And somehow, the informal nature of pandemic interviews, conducted from spare rooms, seems to further expose these ministers’ shortcomings along with their bookshelves. There is a vulnerability about Matt Hancock crouched in his odd, red dungeon of a study. Cornered by his own web-cam, the health secretary shares with Priti Patel and the walking disaster that is Gavin Williamson, an inability to hide his disdain for any journalist who dares raise a tricky question or a suggestion of culpability. They each need to work on their bedside manner as well as their end gaze (that strange vacant, grimace we all make while searching for the off button at the end of a video call).

Of course, it isn’t just Johnson’s poor choices and inappropriate persona that are making him unpopular; sadly there are now over 100,000 other reasons. Enough to make his advisers insist on a more sombre tone when he announced the tragic milestone and told the nation, “we did everything we could”. He is simply not suited to this role. His unconvincing performance bringing condemnations, not least from the nurse interviewed on Good Morning Britain who was “sickened” by the lies he told while lacking the “decency to brush his hair”.

Those tempted to conclude that Johnson is still the wrong man at the wrong time, may want to remember that according to Conservative Home, Liz Truss is best placed to replace him. We may all need to be careful what we wish for.

The covid trauma threat to our NHS