Johnson always writes two versions of every speech, here is the unused version of his covid address to the nation about further restrictions. 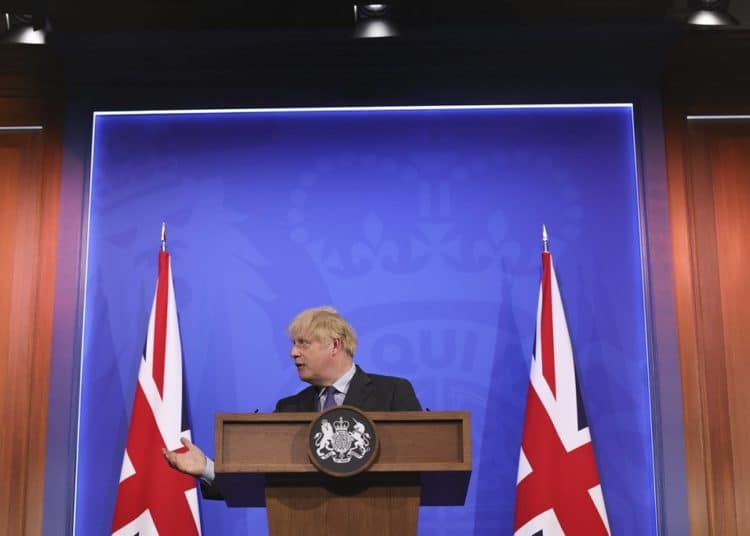 “Prime Minister Boris Johnson-Covid Press Conference with CMO CSA” by Number 10 is licensed under CC BY 2.0

It is well known that Boris Johnson has a habit of writing two versions of any important policy announcement so that he can consider which one he prefers. Yorkshire Bylines has been privileged to receive this transcript of Johnson’s alternative address to the nation on the decision to delay removing covid restrictions. We are grateful to the brave whistleblower who provided us with this exclusive.

Johnson’s alternative address to the nation

It is, as it were, with a heavy heart, that I have to tell you tonight the real reason why I have to ask the nation once again to make yet another sacrifice in order to get on top of this terrible affliction.

My own personal incompetence.

I hid the spread of the Delta variant

As you know, I wanted very badly to go to India for a photo opportunity of me signing a trade agreement with that nice Mr Modi, because I was only getting ones with places such as Liechtenstein, and that wasn’t particularly impressive as we had already had one before Brexit. So, I couldn’t really stop anyone else travelling to or from India, even though it was obvious that a new variant of covid was ripping through its population.

I decided instead that I would deliberately hide from the British people the fact that this variant had been on our shores for two whole weeks. I considered briefly putting the nation on alert and making sure that the first sign of any fresh outbreak was properly controlled via testing, tracing and isolating any localities where there were problems.

Then I decided to wing it and instead hope that my trip could go ahead.

I thought at first that I had got away with this gamble. I sometimes do. After all, I persuaded you all that I had sorted out the Brexit problem, when all I had really done was to sell out the people of Northern Ireland and land the country with a slow economic car crash.

Everything looked fine to me for a while. There was a bit of a problem in Bolton and Blackburn, but nobody cares what goes on up there unless there is a by-election, and they are used to having worse problems than the rest of the country.

Now it has become clear that there are over 500 cases per 100,000 people in Blackburn, and it is spilling over into a whole series of other places. Manchester has over 200 cases per 100,000 and towns, cities, and villages in Yorkshire are seeing rapid rises in infection.

Things are clearly getting out of control again. Just as they did in the first wave.

Back then, I wanted to gain a bit of cheap personal popularity by letting the crowds go to the Cheltenham races, and I hadn’t the courage to cancel Premier League football matches, and had to rely on the club owners to make that decision for me.

Besides I was busy at the time getting photo shots of me shaking hands with patients in covid wards and infecting myself to add to the confusion.

I hoped that we could, as it were, let the disease run through the population and take it on the chin. So, I dithered and delayed until we had one of the highest rates of infection in the whole world while the NHS was trying to cope with homemade personal protective equipment.

When it looked like the system was going to be completely overwhelmed, I tried to quietly ship out any elderly people who lived in care homes, so that they could die without being counted in the statistics for deaths in NHS hospitals. I knew that they would take the infection with them, but it would save my skin for a couple of weeks. That’s just the kind of caring person that I am.

I also hoped that I could let people travel abroad last summer because I thought that allowing foreign holidays would be popular and would win me a few votes. I didn’t realise that would result in them bringing back the Kent variant, and I didn’t bother to study the statistics of the way it was slowly spreading out from Kent, infecting the rest of the nation, and then the world.

Then I panicked when things began to get bad just before Christmas. I didn’t mind cancelling Eid the night before the celebrations because I’ve never liked women who dress like letterboxes, but I was scared stiff of cancelling Christmas. Once things got really bad, I had absolutely no choice and had to give the nation only a couple of days warning to change plans.

I also dithered about deciding to close schools. So badly, that in many parts of the country they opened for one day, letting the children spread disease and take it home. Then I closed them the next day, forcing parents and teachers to come up with a home schooling plan overnight.

Fortunately for me I was able to cover up this whole shambolic mess for a while by boasting how much better Britain was at handling a vaccine roll out than the EU. Everyone loves it when I attack the EU, and no one noticed when they started exceeding our rates of vaccination and got their infection rate once again well below that in the UK. As has quietly happened in Italy, France and Germany.

I’m the least incompetent … I swear

This constant stream of errors has finally made me consider my own position, and I have carefully weighed up the option of stepping aside and letting someone run the nation who doesn’t keep gambling with your health and with the economy.

However, when I looked around my Cabinet and thought seriously about the prospect of putting any of them in charge, I realised that I had surrounded myself with such a dodgy group of untrustworthy characters that there isn’t any minister who is capable of stepping into my shoes without making an even worse mess of the job.

I have therefore decided that it is in the best interests of myself, and my latest family, if I stumble on for as long as I can, and hope that my longstanding strategy of herd immunity finally proves a success.

After all we can’t possible have put all those needles into people’s arms only to find that we’ve imported a new variant that is capable of putting thousands of young people into hospital. Can we?