Roger Winterbottom wonders whether Boris Johnson is an experiment in a new field in robotics and machine learning: Artificial Gormlessness. Can he pass the Turing test and convince us that he’s human? 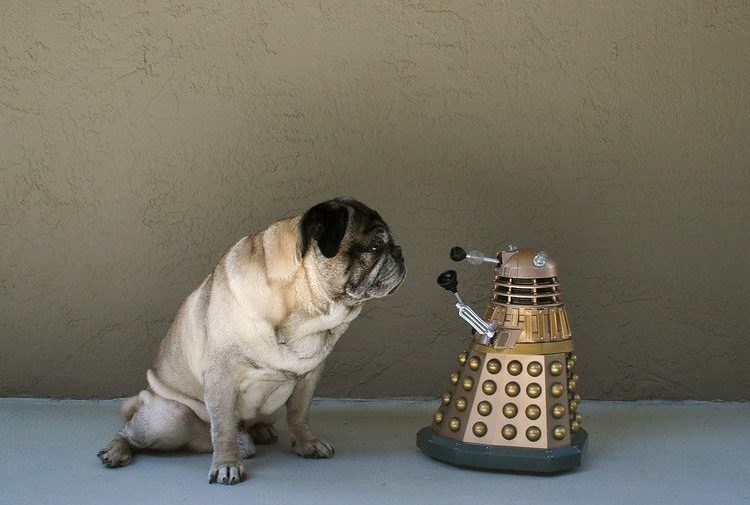 "Pug Poses With Dalek" by zoomar is licensed under CC BY-NC-SA 2.0

With the recent revelation that scientists have taught spinach to send emails, I can’t help but wonder if they could also teach Boris Johnson to brush his hair, or answer questions like a normal human being. It’s got to the point when you can’t help but feel sorry for Keir Starmer at prime minister’s questions.

Like Sisyphus pushing a boulder up a hill, Starmer seems doomed to an eternity of repeating the same fruitless task, asking Johnson a reasonable question only for it to be avoided, ignored or misunderstood, but certainly never answered. You’d get more rational responses at a Handforth Parish Council meeting.

Starmer has gradually become worn down by the whole sorry process, his early confidence being replaced by a blank-eyed weariness at the whole futile charade. He has often been criticised for appearing robotic before, but now he’s gone the full HAL 9000, an emotionless, unblinking presence, calmly trying to carry on with his mission while Johnson frantically tries to shut him down.

The nadir was reached last year, when Starmer asked Johnson to empathise with families grieving for relatives lost to covid, and Johnson appeared unable to take the question seriously, instead heading below the waistline to make an inappropriate pre-prepared gag about underpants.

Starmer recently revisited the question about bereaved families at PMQs, once again seeking empathy for them. It was nice to see that Johnson’s claim at the previous day’s press conference that he took “full responsibility for everything the government has done” lasted less than 24 hours, which is about the same length of responsibility he took for some of his children.

Johnson also seemed to have gone down the robotic assimilation route, becoming stuck in a functional loop and replying to all Starmer’s questions with the same response: “SAY SCHOOLS ARE SAFE! SAY SCHOOLS ARE SAFE!” It was like an educationally obsessed Dalek which has forgotten that its primary mission is to subjugate other species and take over the universe, and is instead focusing on securing universal schooling. I’m still not quite sure why Starmer didn’t calmly point out that schools are so safe that Johnson has closed them all.

So, is Johnson in fact an artificial intelligence cyber-politician? Lacking human empathy, getting trapped in a loop – you have to wonder. Admittedly, one of the key features of AI and machine learning is that it will adapt its responses and behaviour based on its experience, like the Borg in Star Trek. I seem to remember there was a Borg character called Seven of Nine, which is probably the same naming system Johnson uses for his children. Unlike the Borg, however, Johnson shows little sign of learning and adapting. Quite the opposite, as he appears deliberately keen not to learn anything. Any suggestions for a covid inquiry are rebuffed, with the response that it’s still too early. By the time an inquiry is held it will of course be too late. This is not so much artificial intelligence as artificial gormlessness.

Each lockdown has been eased too soon, leading to further surges of covid, and the government has learned nothing from it. In the last few days, the Telegraph reported that the government was planning to reopen pubs and restaurants in April, even though the first dose of vaccinations for the most vulnerable won’t be concluded until May. And even then we’ll have barely got started on the second dose that’s needed to bring full protection. I’m not a scientist – or a robot – but even I can see a slight flaw in that plan.

The reason the Telegraph gave for the proposed timescales was that they were “in time for the local elections”, which I am sure are uppermost in everyone’s minds at the moment. People speak of little else on their Zoom calls to granny: “One hundred thousand dead, sure, but never mind that – who are the candidates for police and crime commissioner?”

Even the coronavirus has proved more adaptable than the government, managing to evolve and change rather than repeating the same mistakes. This has come as a surprise to Dido Harding, head of track and trace, who said to a select committee hearing, “We have seen the new variant emerge, which was something that none of us were able to predict.” Maybe it might be advisable to have someone qualified in charge instead? Even a GCSE in biology would be a start. But then, Harding was equally surprised when the infection rate soared last September when schools and universities restarted, just after the government had subsidised everyone to go out and socialise. Artificial gormlessness, right there.

Perhaps we ought to apply the Turing test to Johnson, Loquacious of Borg himself, to determine whether he can convince us that he is in fact human. Let’s see how he reacts when presented with a straightforward question, as he was by Sam Coates of Sky News recently.

“Do you think,” said Coates, “as some senior politicians in Britain seem to, that President Biden is ‘woke’?”

Sounds easy enough for a human to answer, I’d say. Let’s see if the Johnson-bot can persuade us he’s truly one of us.

Hmm. That’s not a great start. I tend to get the same response from Alexa if I ask her to play something by Hildegard von Bingen.

“I … I … I’ve … I … what I KNOW”, he over-emphasised, “is that he’s a fervent believer in the transatlantic … er … ALLIANCE”. All right Johnson-bot, don’t stress your circuits.

Prime Minister – I’m not sure you’re answering the right question. Would you like to reboot and try again?

“And”, he continued, “a believer in a lot of the things that we want to achieve together and … you know, in so far as … um … nothing wrong with being … being WOKE if …” Now this is better. He seems to have finally worked out what the question was.

“But if … but what I can tell you is I think that’s it’s very important for … er … everybody … and … er … I would certainly put myself in the category of people who believe that it’s important to stick up for your … er … your history, your, your, your traditions and … er … things … and your, your values, things you believe in.”

Oh dear. No, I’m afraid that’s really not going to convince anyone that he’s human. Can we put some AI spinach in charge instead?