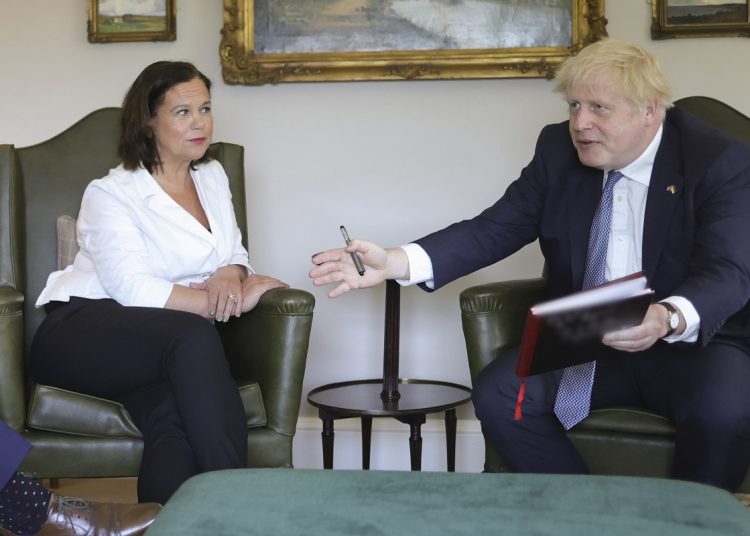 There are few situations that an intervention by Boris Johnson cannot make worse. So it was with his visit to Belfast yesterday in a belated attempt to close the destabilising rift that he personally created through a combination of the Northern Ireland protocol and an ultra-hard Brexit.

He went to urge the Democratic Unionist Party (DUP) to join the power-sharing executive, but came away empty handed. It was an absolute train crash.

In the run up to the visit, the prime minister had spoken with Irish Taoiseach Michael Martin, later described by sources in Dublin as “the single worst call [Martin] ever had with anyone”. The FT’s Peter Foster claimed he had been told the call was “very difficult”, “stubborn”, “eulogising on sovereignty” and “little grasp of detail” …not even close to “conciliatory”.

Not to be outdone the foreign secretary, Liz Truss, then managed to annoy EU vice president Maroš Šefčovič in a telephone conversation that one EU source characterised as “horrendous”, adding that they had “seldom seen Šefčovič so cross and so upset”.

It’s examples like these that demonstrate why Britain is wise to employ professional diplomats.

To pave the way, the prime minister had coincidentally penned an article for The Belfast Telegraph setting out some “core principles about the UK Government’s approach to Northern Ireland” and outlining his next steps. While some welcomed the reasonable and placatory nature of the piece, others were surprised to learn the prime minister had any core principles on anything except his own self-promotion.

His message was, as usual, a duplicitous one.

For the EU Johnson said Britain would “always keep the door wide open to genuine dialogue” on the protocol, and would “continue to protect the single market”, while for the benefit of the DUP he threatened Brussels that the UK government would face a “necessity to act” if the bloc doesn’t change its position.

This came after The Times reported at the weekend that the government was preparing domestic legislation granting ministers the power to override parts of the protocol. A senior government official told the paper that while Britain wanted “a weapon on the table, we don’t want to use it”.

Quite how much space there is for ‘genuine dialogue’ with the EU when a weapon is on the table was not explained. It is pure Monty Python.

The visit itself began badly. Johnson was roundly booed by hundreds of protesters from Border Communities Against Brexit (BCAB), who were waiting for his arrival at Hillsborough Castle in County Down where he met political leaders from the main parties. Things went rapidly downhill from there.

After what was described as a ‘tough’ meeting, Sinn Féin’s president Mary Lou McDonald and her deputy Michelle O’Neill, Stormont’s first minister designate, emerged to accuse the prime minister of coordinating with “obstructionist tactics” by the DUP who want to see the protocol ditched.

McDonald did not mince her words:

“I’m sorry to report that we’ve had no straight answers really from the British prime minister except a confirmation of what we already knew, which is that in fact this impasse is entirely coordinated between themselves and the DUP.”

Their accusations of collusion with the DUP seemed wide of the mark when Sir Jeffrey Donaldson later told journalists that talk of legislation by the UK government wasn’t enough: “I don’t see much point of having legislation if you’re not going to table it. Legislation only becomes law when it is enacted by parliament.” He added, “The tabling of legislation is words. What I need is decisive action. And that means I want to see the government enacting legislation that will bring the solution that we need”.

Any appearance of ‘coordinated’ action with the DUP seemed to be entirely accidental. Clearly, one thing absent from the meeting was trust and without it there can be no meaningful progress. There is no trust in Johnson from any quarter.

The protocol is largely supported by voters and industry in Northern Ireland. The business community is reported to be ‘astonished’ that the PM didn’t take the time to meet with the Northern Ireland Brexit working group, an umbrella organisation of 14 industry bodies.

In a letter to Johnson they are said to have specifically warned against any unilateral action. A source is quoted saying: “We do not need the nuclear option when we believe there is still a prospect of a deal.”

They claim the government has shown little interest in business, with just one short 15-minute Zoom call with Liz Truss in January and no engagement since.

The group – which includes the Confederation of British Industry, the NI Food and Drink Association, the Ulster Farmers Union, Manufacturing NI, Hospitality Ulster, the Institute of Directors NI, Logistics UK and the Northern Ireland Retail Consortium – is said to be “perplexed by statements from government listing issues that have already been resolved or which are close to being resolved”.

It seems the government is now manufacturing its own crises.

Johnson didn’t think the EU would apply the protocol

But if the meetings went badly, worse was to come. The prime minister once again showed why it’s dangerous for his minders to allow him in front of reporters without a prepared script.

When Channel 4 reporter Paul McNamara put it to him later that he must be fuming with the person who negotiated and signed the Northern Ireland protocol, he was forced to admit it was him. But, he told McNamara, he had “hoped and believed that our friends would not necessarily want to apply the protocol in quite the way that they have”.

This is so jaw dropping you may want to check this is indeed the prime minister of the United Kingdom speaking about an international treaty bearing his signature:

He did not elaborate on what made him ‘hope and believe’ the EU would ignore a treaty they had negotiated in good faith.

One can only assume when he was pictured in Downing Street signing the withdrawal agreement he thought it was simply an opportunity to showcase his ability to write his own name in joined up letters with no bearing on the real world. 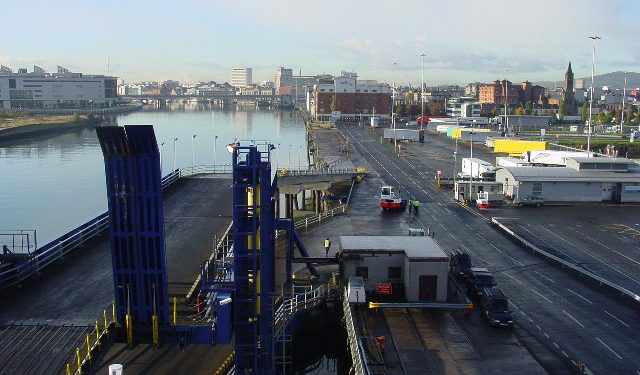 The old ‘trilemma’ is back on the table

The prime minister earlier told the BBC that any changes to his Northern Ireland protocol and post-Brexit trade rules “must also restore power-sharing at Stormont”.

It is clear he is preparing to wash his hands of the problem and blame the EU’s ‘intransigence’ when power-sharing in the troubled province formally collapses after the UK government’s demands for wholesale changes to the Northern Ireland protocol are not met.

In February 2021 Sammy Wilson, DUP MP for East Antrim, wrote an article: The NI Protocol pulls apart the Good Friday Agreement, in which he said:

“Given our troubled past and the continued existence of groups who have been engaged in violence in the past, if it is seen that political engagement does not work then the real danger is that frustration and anger will be channelled through violence against easily identified targets.”

This kind of veiled threat is being used to force the EU into agreeing significant changes. But Šefčovič has already confirmed that, “The Protocol, as a cornerstone of the Withdrawal Agreement, is an international agreement. Its renegotiation is not an option. The European Union is united in this position”.

The Irish trilemma is now firmly back on the table. There can only ever be two out of these three outcomes:

(1) No land border on the island of Ireland

(2) No sea border between Great Britain and Northern Ireland

If both a sea border (opposed by the DUP) and a land border (opposed by virtually all) are out of the question, then Johnson is left with having to water down a hard Brexit, something the Conservative Party hard right will never accept

In what may turn out to be a prophetic quote, Johnson has said the protocol, “is turning into a political problem” that needs to be rectified.

This may eventually be seen as a bit of an understatement.

The prime minister is working himself into a corner from which there is no obvious escape. Truss will apparently outline today what legislative options the government could pursue to override parts of the protocol. The foreign secretary is not expected to go into detail.

This will be far from the ‘decisive action’ demanded by the DUP. But any legislation is likely to take months to draft and getting a bill that purports to break international law through a parliament stuffed with lawyers may prove next to impossible anyway. This is despite the UK attorney general Suella Braverman claiming that the government’s proposed legislative changes would be legal.

Sir Jonathan Jones QC, the former head of the government legal department who resigned over the UK internal market bill which also sought to break international law, said article 1 of the protocol is designed to ‘protect’ the Good Friday Agreement and to suggest it is now a reason to ditch the protocol “sounds like a very weak argument”.

So, there is little chance of the legislation ever being passed and certainly not in the short term. The EU knows the ‘weapon’ Johnson intends to threaten them with is loaded with blanks.

By upsetting the delicate balance and destroying the ‘creative ambiguity” that could exist only inside the EU single market and the customs union, he has brought instability that will only be solved by a superhuman effort and perhaps not without returning to something much closer to the aforementioned single market and customs union.

Nothing else makes international borders truly invisible. Not only does it solve the current tensions it makes sure none can arise in future as regulatory changes apply in lock-step to both sides of the border, a border which then becomes more notional than national.