Increasingly urgent calls from various quarters to reopen talks with the EU are in danger of making Britain look like Europe’s Oliver Twist; please sir can we have some more? 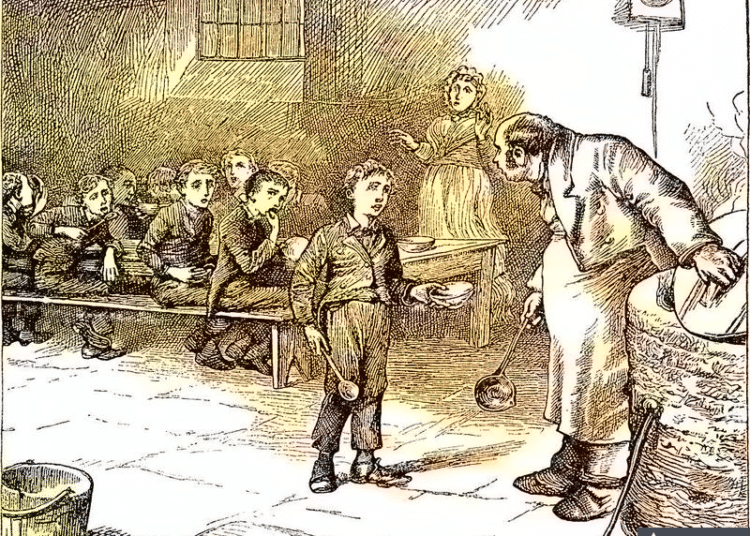 The thin gruel of Johnson’s trade and cooperation agreement (TCA) has failed to satisfy Britain’s exporters of goods and services, leaving many distinctly undernourished. Increasingly urgent calls from various quarters to reopen talks with the EU are in danger of making Britain look like Europe’s Oliver Twist: please sir can we have some more?

The TCA was never going to be the final word. The political declaration published alongside it in December last year, once described as a “graveyard of ambition”, lists a whole series of unfinished topics on which the UK and EU will continue talking.

But even before getting started on any new areas, the government is under pressure to reopen matters the EU thought were settled.

Britain: the Oliver Twist of Europe

It isn’t just exporters who are complaining. Importers are adding their voice too, even though the full impact of barriers imposed by the trade deal have yet to be felt for goods coming in from Europe. Across the newly created Irish Sea border, companies that hitherto thought of themselves as simply retailers or wholesales are feeling the pinch, as EU official controls disrupt the UK’s internal supply chains.

The British Retail Consortium (BRC) have joined calls for more urgent discussions between the EU and the UK over checks for food products. They want an agreement that “recognises the need for EU import controls but does not add unnecessary bureaucracy and costs, reducing choice for Northern Ireland consumers”.

The architect of both the withdrawal and trade agreements, Lord Frost, says the NI protocol, the one he personally negotiated, is “unsustainable” and calls upon the EU, “rapidly, to find a new approach and new solutions”. The EU seems singularly unimpressed.

Frost is under pressure to try and reopen the deal

Frost himself is coming under pressure to agree a financial services deal with the EU to halt the exodus of financial firms to the bloc. Many firms, according to the Daily Express, want a so-called ‘equivalence’ agreement with Brussels.

MPs have highlighted the problems for the food sector, and warn that companies will collapse if action isn’t taken to amend the trade deal. Some producer bodies are lending support for talks with the EU to be reopened to secure mutual recognition of food standards and veterinary inspections.

On Tuesday, giving evidence to the House of Lords European affairs committee, Frost himself told peers the UK was looking for a New Zealand style ‘equivalence’ deal on food standards with the EU to minimise checks on Irish Sea border, which “should enable reductions in paperwork”.  Unfortunately, the EU has already rejected the idea because of our close proximity and the greater volumes and type of trade involved.

The UK is still waiting for a ‘data adequacy decision’ from the EU to allow information flows between the EU and UK to continue without the need for cumbersome contractual clauses or the adoption of additional legally binding corporate rules.

A draft decision has been published, which finds the UK’s data protection standards are “essentially equivalent” to the EU’s, but it is not yet formally approved. Even if, as expected, the EU does approve it, the decision is reviewed every four years and is open to legal challenge.

Meanwhile, as Nigel Farage continues his one man campaign against migrants, the home secretary’s post-Brexit plans for returning asylum seekers to mainland Europe have been rebuffed. Patel will now come under pressure to negotiate bilateral agreements with individual EU member states. Stella Perrot has already covered this extensively for Yorkshire Bylines.

The EU seems quite content with what it negotiated

What is notable out of all this, is that virtually all of the calls to continue talks or reopen or amend either of the treaties emanate from this side of the Channel. Johnson himself, welcoming the trade deal, admitted the TCA did not achieve all the UK wanted on financial services or fishing.

But the EU appears untroubled by the TCA terms, and you can see why. New figures from the EU’s statistics office Eurostat, show that imports from Britain were down by more than a third in the first quarter of 2021. And because exports to the UK fell by only 14 percent, the EU’s trade surplus with the UK increased to €35.8bn.

The problem for the government is that, like Oliver Twist with Mr Bumble, it no longer has influence or indeed any sympathy in Brussels and therefore has little to incentivise the EU27 to offer serious concessions on any of these topics.

We can hardly threaten to walk away and abandon the trade deal, adding tariffs and quotas to our exports, whilst asking the EU for help to lift the apparently intolerable burdens that UK businesses face now. It would be like Oliver Twist threatening a hunger strike.

In the 1970s Britain was known as the sick man of Europe. After Brexit, we are swiftly becoming the irritating orphan with a begging bowl.