Kerry Pearson considers the paths that Biden can take with his Catholicism. Will he move towards the centre, to reconcile the nation, or will he move further leftwards? 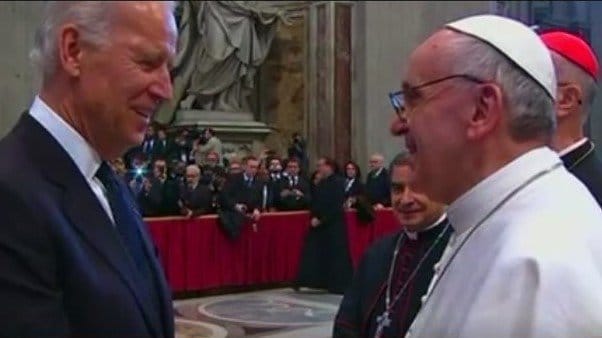 "Joe Biden and the Pope" by Ninian Reid is licensed under CC BY 2.0

When the American election results were announced, Joe Biden, the second Catholic president since John F Kennedy, offered St. Francis’ words, “where there is doubt, faith, where there is darkness, light”. The New Yorker recently reported that progressive Catholics are putting their trust in Biden, who regularly attends Mass, visits the graves of his first wife and daughter, and carries rosary with him.

Biden, though, is not what springs to mind when one imagines a typical devout American Catholic. He is pro-choice and supports gay rights, which has invited criticism from several bishops, who demand that he not take Communion. The Hyde Amendment, which prohibits the use of federal funds to pay for women’s abortions, also did not receive Biden’s support during the election campaign. It is not surprising then, that progressive, ‘flexible’ Catholics can relate to Biden, and it is also hoped that his religious sentiment can somewhat heal ‘the moral damage’ within America.

The Church, after losing much of its legitimacy and moral status after the sexual abuse scandal, is counting on Biden to ignite the religious progressivism that formed much of the civil rights movement. This may not take the path that many imagine though. Biden’s administration is unlikely to follow Ronald Reagan’s methods, who was christened the ‘father of the pro-life movement’, and who likened the conservatism of Pope John Paul II to anti-Communism. Ever since, Catholic conservatism has come hand in hand, and even shaped, American Republicanism.

Religious belief is seemingly no longer private, but political: six of the nine Supreme Court justices, eight of Biden’s nominees, and representative Alexandria Ocasio-Cortez, are all Catholic. Despite this, and despite the appointment of Amy Coney Barrett, a devout Catholic who is a staunch pro-life supporter, there is hope that Biden’s commitment to not carry religion into politics, will avoid any controversial policies.

President Biden has in fact been compared to Pope Francis for his progressive, nondoctrinaire Catholicism. Pope Francis’ values and key themes – mercy and concern for the poor – are the opposite of Trump’s inhumane – namely immigration – policies. Pope Francis has even raised awareness of climate change, drawing links between globalised capitalism and the destruction of the planet, bringing to mind Biden’s Green New Deal.

Biden can move the Democrat Party even further to the left, making use of Pope Francis’ criticism of capitalism and its devastating role in global warming. He could also follow in the Pope’s footsteps to provide poor families with an income. Or he can move towards the Centre. Using the ‘language of faith’ could be a good way of reaching out to staunch Trump-loving Republicans, and thus encouraging the nation to reconcile.

Hopefully, Biden combines these two choices. He is somewhat safe moving leftwards, as his faith and commitment to Mass may act as a cover to implement climate policy, benefits for the poor, and health care. What is hoped by many non-Catholics is that Biden’s relationship with the Vatican will encourage the Church to progress on women’s rights and gay rights.

There will be challenges for Biden. Harsh opposition from Bishops, particularly the Archbishop Jose Gomez of Los Angeles, will prevent Biden making progressive moves on contraception, marriage, gay rights, and abortion. As the New Yorker points out, the Catholic traditionalists that despise Pope Francis, are unlikely to support the new president.

Progressives that usually oppose political influence from the Vatican, are now optimistic, even wishing for, domestic policy inspired by the Pope, in an attempt to move the Pope further left. The second Catholic president cannot afford to ignore his faith, which right now, is acting like a superpower.