On a visit to Northern Ireland yesterday where he met Irish prime minister Micheál Martin, Boris Johnson made the extraordinary claim that there will be no border down the Irish Sea, saying if there is one it will be “over my dead body”. 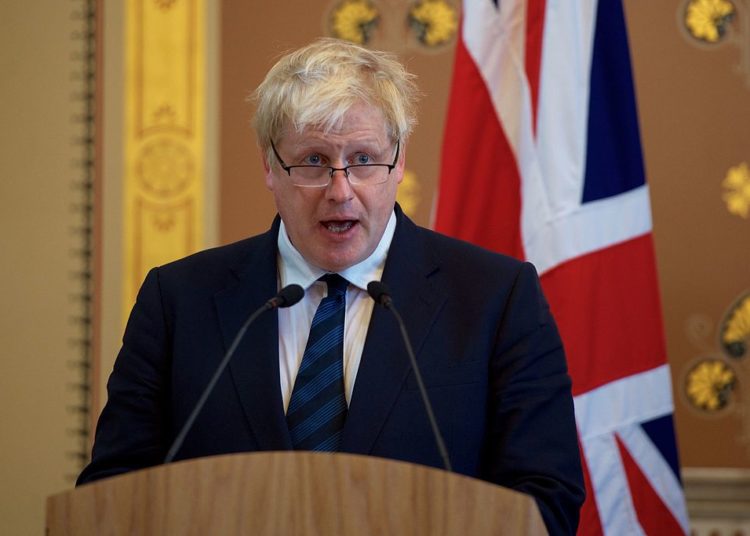 On a visit to Northern Ireland yesterday where he met Irish prime minister Micheál Martin, Boris Johnson made the extraordinary claim that there will be no border down the Irish Sea, saying if there is one it will be “over my dead body”.  This is widely reported in the local media (here and here) and comes as thousands of his own civil servants are working on implementing a border down the Irish Sea and as the Port of Larne begins work on a border control post.

It once again calls into question Johnson’s understanding of the Northern Ireland protocol enshrined in the Withdrawal Agreement that he negotiated and agreed to last year and which parliament has approved.

The prime minister has a notoriously strained relationship with the truth and it is not clear whether he has now broken with it completely, does not understand the consequences of the NI Protocol, or has simply lost touch with reality. It is part of Johnson’s own eternal triangle.

Whatever the cause, he increasingly appears as a slightly addled bystander, only vaguely aware of events that he is supposed to be in control of.

A week ago the government published a lengthy policy paper detailing “new administrative processes for traders, notably new digital import declaration requirements, and digital safety and security information, for goods entering Northern Ireland from the rest of the UK”.These processes will be administered by UK authorities in the form of HMRC and Border Force so that, “goods destined for Ireland and the EU pay tariffs when they should.” By definition this must be a border.

The prime minister’s stubborn refusal to face up to the consequences of Brexit for Northern Ireland will only add to the risk that businesses will not be ready for the end of the year.

Yesterday, the Institute for Government (IfG) coincidentally published a report suggesting the ‘Check, Change, Go’ advertising campaign about the end of the transition period risks “lulling people into a false sense of security”. Maddy Thimont Jack, a senior researcher, accuses the government of focusing on “sunlit uplands of new opportunities” rather than warning about the consequences of businesses and citizens being unready for the coming changes.

The IfG report says the “majority of firms have not even begun to prepare” and claims the government has not learned the lessons of last year’s ‘Get ready for Brexit’ campaign, adding that the new campaign “fails to convey any useful messaging about what steps to take and what will happen if these steps aren’t taken”.  Johnson’s comments do nothing to change that.

The government has a difficult choice to make. To spell out the practical realities of leaving the single market is an admission of the serious economic disruption that we will face next year, but to not do so risks making matters worse through a lack of preparation.

On Wednesday, Tom McTague wrote an article for the American magazine The Atlantic, ostensibly about Johnson’s woeful handing of the coronavirus pandemic but also examining other long-standing problems of the British state which have been thrown into sharp relief by Covid-19. In it he says this:

“In remarks echoed, though perhaps not as colorfully, by politicians, officials, and diplomats, one figure close to Johnson told me of his experience at the heart of the government machine these past few months: ‘It’s a f***ing disgrace’.”

Johnson’s hyperbolic ‘dead body’ comments are not of course new. He famously promised to lie in front of the bulldozers to prevent the expansion of Heathrow airport, although he went missing when it came to a vote in parliament. And last September at West Yorkshire Police HQ in Wakefield, he said he would “rather be dead in a ditch” than delay leaving the EU beyond 31 October, although as we now know that didn’t happen.

Two things we can be sure of. There will be a border down the Irish Sea and it will not be over the prime minister’s ‘dead body’.