Is a United Ireland only a slogan?

Geoff Martin discusses the debate around a United Ireland, the questions this raises and the implications for Global Britain. 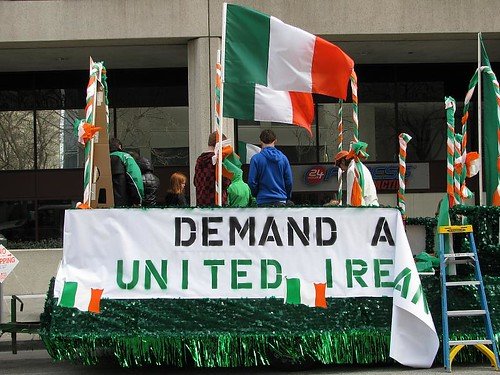 "demand a united ireland float" by stevendamron is licensed under CC BY 2.0

Many English romantics love the thought of “The Four Green Fields of Ireland”. In truth, a United Ireland is only a slogan. Look beneath its surface and there are as many interpretations as there are participants in the emerging debate. There is no consensus on what it means or what form it might take.

There is, however, an acceptance of the principle of consent, that violence has no part in any solution and that coercion is anathema.

Attitudes towards a United Ireland

There is no sign that the majority of unionists are even prepared to discuss a United Ireland, undefined, or one that would remove their emotional and cultural feelings of attachment to their sense of Britishness. As the Nobel Laureate David Trimble said to an SDLP colleague when asked what he wanted for Unionism: “To be left alone”.

It might be difficult to be left alone while occupying a space in which the other half wishes to see change. Trimble’s sentiment is a measure of the chasm between the philosophy of wishing to be left alone as a minority on an island, and the myriad different combinations of possible dialogue.

There is no meeting of minds. There is no agenda. Relations are seldom friendly. Too many unionists regard the south as a foreign country. To many of the older generation near the border, it remains “the free state”.

Yet new attitudes are beginning to appear in the south. John Bruton, a former Fine Gael Taoiseach recently confronted some comfortable assumptions, accepted uncritically until he spoke:

“The history of Northern Ireland since 1920 demonstrates the danger of attempting to impose by a simple majority, a constitutional settlement and an identity, on a minority who feel they have been over-ruled.”

What would happen if a border referendum was to be held and carried, but by only a slim majority, leaving a substantial minority deeply unhappy? Would the two governments be prepared to move ahead on that basis? What would the Europeans and the Americans think? And what would the loyalists in the north and the many unionists who sympathise with them be prepared to do?

What would be the responsibility of the Belfast/Good Friday agreement participants and treaty supporters in such circumstances? Already there are a growing number of hard-line unionists and Conservatives who do not like the Belfast agreement.

The British/Irish council is not acting as effectively as arrangements did between the two governments under Tony Blair and Bertie Ahern. The North South Ministerial Council has been very low ley, when it has a role to spearhead better cooperation between north and south. And the Northern Ireland Executive struggles to govern effectively.

Prospects for Global Britain with a United Ireland

It may be too early to judge the effect of membership of the EU single market and customs union on business patterns in the north. Or the effects, if they turn out to be negative, on east-west trade between Britain and both parts of Ireland, with their respective positions inside and outside the single market.

The prospects for Global Britain on levels of prosperity within the United Kingdom, now out of the EU, are also difficult to predict.

If Britain fails to achieve its Global Britain ambition while Ireland continues to prosper within the EU and the north begins to reap the rewards of single market membership as predicted, could the changes in trade patterns and associated prosperity possibly have an effect on attitudes in the north?

It is to be hoped that the Irish protocol problems can be resolve to general satisfaction. If so, before any discussion can even begin about a United Ireland, then convincing answers will be required to many questions including about financial responsibilities, taxation, social, health and welfare benefits, and many others.

As a starting point now, all political parties, north and south, should declare themselves against coercion, against violence and against the outdated slogans that still accompany them. This would constitute a first practical step forward towards a discussion aimed at resolving real issues and bridging the yawning gap that continues to exist between hope and reality in a culturally divided island.

Until then, a United Ireland will remain for many, the dream of a lifetime. For others a ghastly nightmare.

Geoff spent his youth near the Northern Irish border town of Newry. Later he was the inaugural head of the European Commission in the North of Ireland, then the EU representative in the UK and a visiting professor at the Jean Monnet Centre of Excellence, University of Leeds. He has advised the Commonwealth secretary general on strategic relationships worldwide.