Alex Toal interviews Susan Hinchcliffe, one of three candidates on Labour's shortlist to be nominated as West Yorkshire mayor. 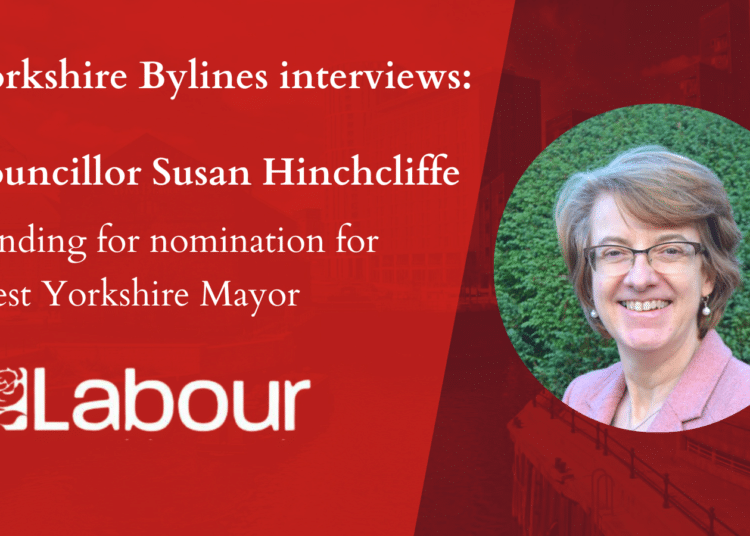 There are few people who have been as intimately involved with West Yorkshire devolution as Susan Hinchcliffe. As leader of the City of Bradford Council, and chair of West Yorkshire’s Combined Authority, she was one of the main negotiators of the current devolution deal, which created the mayoralty.

Now she’s running for the Labour nomination to fill that role, and is on a shortlist of three candidates alongside Tracy Brabin (MP for Batley and Spen) and lawyer and activist Hugh Goulbourne. She has a slew of supporters across the party already, from local leaders and former MPs, to the trade unions Community, UNISON and Usdaw, and two local MPs, Imran Hussain (Bradford East) and Holly Lynch (Halifax).

When I called Hinchcliffe to talk about her candidacy, it became clear early on that her experience as a dealmaker was key to her pitch. One thing that came across often in the interview was her pragmatism. Hinchcliffe has been in these negotiations, and is aware that power ultimately lies with Westminster, but that there are other ways to win concessions from ministers and civil servants.

A key aspect of how she sees accountability being achievable is through the press, and she has already become a savvy media operator. As she was talking to me about government reassurances that she had been given that a second lockdown was not being considered, they sounded familiar, and I realised that it was an almost exact repeat of what she had said on previous ITV interviews, and in a video  released by her campaign. This kind of discipline is key to getting messages through to voters, and a sign that Hinchcliffe knows more than many Westminster politicians about communications.

It was clear from talking to Hinchcliffe how, if elected, she could use the mayoral role to improve the media focus given to West Yorkshire, and use this to achieve genuine change.

“So I think the role of mayor is something that, regardless of where you are in the country, the media pay more attention to. The media recognises our significance as having a wide constituency audience to speak for. In West Yorkshire, that’s 2.3 million people, a similar size to Manchester. It’s how you use that, both to be a big voice for the region, but ultimately, also to be a deal maker. So yes, I shout. But I want to get the money as well. The effort and work that I put in has to be worth something to the people I represent. I need to see a positive difference being made.”

She is also aware that more power in West Yorkshire by itself is not enough, and that local leaders across the North have to be united if they are to win concessions from Westminster. It was with this in mind that she organised a joint letter from northern Labour leaders in support of Andy Burnham, during the Manchester standoff. Throughout the interview she talked about the importance of seeing “a strong true north”.

Hinchcliffe also sees substantive benefits to having the mayoral role in helping develop West Yorkshire. When I asked her about how the pandemic would have been different had the role already been in place, her focus turned primarily to the underlying economic conditions.

“Manchester had its devolution deal six years ago and already spent a lot of money that we haven’t had at this side of the Pennines. So when we look to the future, post-covid, getting us back on our feet economically is going to be tough, because we haven’t had that investment. So there is a real need to accelerate the devolution deal and to see that money spent.”

One reason that Hinchcliffe sees this inequality is through public spending, and a statistic to which she refers on several occasions is that only 5p in every pound of tax revenue is spent on devolved administrations in the UK, compared to 33p in countries like Germany. For her, every second lost on getting a devolution deal is a second lost on improving West Yorkshire.

“As chair, I tried to remain flexible throughout, because I knew devolution was just so important for the region. Regardless of what I wanted, I thought it was a dereliction of duty not to achieve something that was so obviously going to provide extra money and resources to the people I represent. So I was fixed on achieving that devolution deal. So we tried Leeds City region, we tried North and West Yorkshire, we tried Yorkshire, and then finally West Yorkshire. And it was difficult getting government to agree to any of those permutations, because essentially, I think, national government, civil servants too, not just politicians, like how things run now. Why wouldn’t you want to keep it? Why do you want to cede that?”

Moreover, she knows exactly what she wants to achieve as mayor. We talked a great deal about transport, and Hinchcliffe speaks with excitement about the £2bn mass transit scheme which has just been agreed for West Yorkshire.

“It’s a big piece of life-changing infrastructure, but it would physically and economically bind us better together and really accelerate our good growth that we all want to see.”

Skills are an important part of her vision for the region, and at one point she mentions her frustration at the Department for Education for its opposition to devolution:

“So the DfE and DWP are very centralising departments, and envisage plans nationally delivered uniformly across the whole country and imagine that’s going to work. And of course, it doesn’t work, because you’ve got different actors, different agencies in different places who already have their own smaller programmes, it’s just impossible to knit them together. DfE spend something like 10 billion pounds a year on education skills; just some of that would be really helpful.”

This development of skills also plays a part in how she sees Labour’s pitch to the countryside. Hinchcliffe mentions the need to “never take those people for granted” and the need to serve them equally, as she explains how the mayoral role can support people who might not usually think of themselves as Labour voters.

“We need to think about rural businesses that provide perhaps small levels of employment in rural communities, but significant in the context. So I’m getting more money for economic development. And that includes social enterprises, cooperative businesses, which is really vital for those communities. They are the lifeblood of an economy. And when it comes to a village, skills and education are things that affect everybody. I want to make sure that people have access to skills throughout their lives, wherever they are, because it holds us back if we don’t invest in people, we need a people powered economic revival in West Yorkshire and skills from my point of view is the way you do that.”

I finish the interview by asking Hinchcliffe about what she would do to get people more invested in local politics, in the face of declining turnout over the past decades. She points to the pandemic, and the attention that it had given to the importance of local government, along with the fact that local figures have been more trusted than national ones since the onset of covid. Her overall pitch, however, is broader, and it’s clear that Hinchcliffe sees genuinely positive ways that the mayoral role can get people invigorated about the future.

“Essentially, I’d want to really excite the public with a new hope for a new future. Because people are so sick and tired of the old way of doing things. Now, the pandemic has really demotivated people completely given them lack of hope for the future. We as a Labour Party, and I as a leader, am keen to really lift people’s spirits and show them that there can be a better future with better transport with better jobs, green jobs that their children and grandchildren can get because they’ve got the right skills. So that is the kind of future we need to clearly lay out, and show how we can deliver it.”