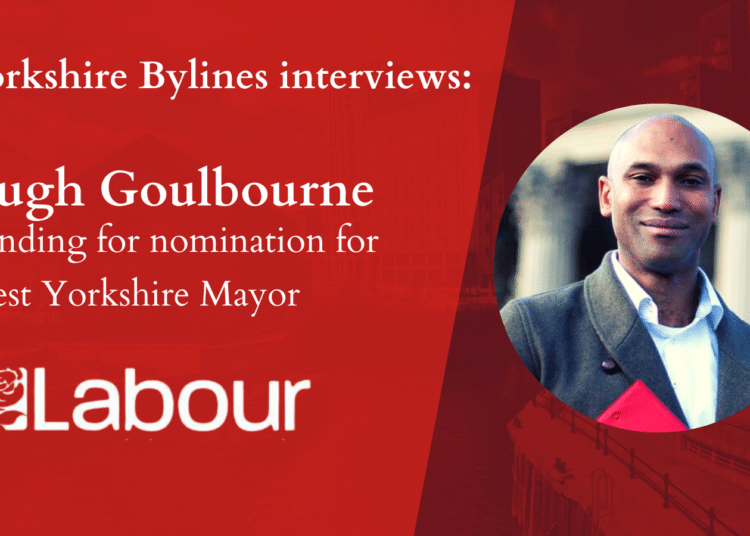 One of the reasons that covering the race to be Labour’s nominee for West Yorkshire Mayor has been so exciting has been the diversity of the backgrounds of the three candidates on the party’s shortlist. While Susan Hinchcliffe’s experience is of local governance, and Tracy Brabin’s is of national politics, Hugh Goulbourne has many years of grassroots projects and campaigns alongside his professional, business and clean energy policy experience.

Having been in Labour for 25 years, Goulbourne’s worked on many campaigns, including a number of mayoral ones. His experience came out as he talked about his campaign, which he had launched two months before Brabin or Hinchcliffe.

“We got going early because I felt there wasn’t enough discussion about the devolution deal. My experience from previous mayoral elections is that where we don’t talk about it enough, the Labour Party doesn’t get going. Then we might even lose, as we did in the West Midlands.”

Goulbourne talked of the need to get Labour winning again and using the mayoral position to further the argument for a Labour government. Even though the Labour nominee will be favourite to win, he is not taking that for granted. In this vein, he expressed his enthusiasm for keeping the policy debate limited to a few key issues, and rooting them firmly in people’s lived experiences, rather than academic debates.

It’s clear that Goulbourne is aware of the limitations of the mayoral position. He cited the £38m annual budget, and what that could do, but for him the position is more about the potential to coordinate between the public and private sector, and between West Yorkshire and other governments, whether at a local, national, or international level.

Goulbourne talked about how the mayor could be a champion for the region, going to London and overseas to attract new business and investment. He drew attention to the diversity of the region the cities like Leeds and Bradford and towns like Halifax and Huddersfield, something that investors are increasingly looking for.

“I think the thing that often is forgotten about West Yorkshire is – sure we’ve got great universities, Leeds is a great city particularly for professional services, and we’ve got great manufacturing – but I think our people fundamentally are really great people.”

It’s clear that this love of the people of West Yorkshire was central to Goulbourne’s candidacy. We talked of his own experiences of marginalisation while he was practising law in London, of being mistaken for box office staff at an event he was chairing, and of his determination to bring groups of all different backgrounds together.

This is something that he has already done in Yorkshire, lobbying councillors to help those affected by the Windrush scandal, setting up the Kirklees Diversity and Innovation Network, and working with businesses to ensure that diversity remains high on their agenda. As mayor, he would expand this network across West Yorkshire, while also setting up an intercultural and interfaith task force linked to the Intercultural Cities programme.

It became clear that Goulbourne is not just grassroots as a campaigner, it’s how he hopes to govern. A key part of this ethos is the use of citizens’ assemblies and participatory budgeting, where citizens can debate tricky issues such as climate change and new housing and then decide where money is spent. Goulbourne is keen for these to be positive experiences, where people talk about what they like about their communities, and for these assemblies to be empowered with a budget for fulfilling the projects which excite them.

“That’s the critical bit for setting my identity on this. As mayor, I would be working with officers and council leaders to do some big stuff. But at the same time, we need to have lots of people starting to have conversations about what their community looks like, how they’d like things to change, and then feed that back up to us as well. So it’s a bottom-up as well as a top-down approach.”

Reaching out to rural communities is important for Goulbourne, which he described as a “blue wall” in their own right. Just as Johnson toppled Labour’s red wall in his road to a majority, Goulbourne sees retaking rural seats as crucial for his party’s road back into power, seats like Ed Balls’ former constituency of Morley and Outwood, a short ride from where he lives. For him, this involves challenging internal Labour Party perceptions of who really lives in these places.

“Forget this image of Land Rovers and Barbour jackets, most people in agricultural jobs are very low paid. It’s really a working-class sector”.

Goulbourne himself lives on the threshold of town and country, on the outskirts of Huddersfield, and is aware of how distinct the needs of both areas can be. A universal need for all communities, however, is transport and Goulbourne sees the need to simultaneously lower emissions while improving West Yorkshire’s internal connectivity. For him, an effective transport system is one of the best ways to tackle a sense of marginalisation in these communities and to win them back to Labour.

“When you actually talk to people there, I think a lot of it is marginalisation, because they don’t have good transport systems. They don’t feel included in a wider conversation. They feel like the cities and metropolitan areas get all of that stuff, and they don’t. So I think there’s a need to listen to what people are actually saying about why they feel marginalised and then involve them in that.”

His plans are ambitious, and include a cycle ‘superhighway’ across the county, and an authority-wide app to help people find public and private transport near them, to maximise the number of people sharing lifts and reduce empty seats.

Finally, I asked Goulbourne about what he would say to anyone considering voting for him in the election in May, if he’s nominated.

“I’m in my children’s playroom at the moment, which has to double up with my home office. And when I think of their generation, I’m really hopeful for them.”

“I don’t doubt the scale of the challenge, especially for someone like me who’s new to politics. But I am really confident that I’ve got the kind of competence from being a lawyer, and the professional experience from running my own business. This devolution deal’s not enough, it’s just the start. But let’s make it work, let’s use it as the start of the journey. Most importantly, let’s make sure we get a Labour and Cooperative mayor into power.”