Inflammable cladding is still a material choice for constructors. The housing minister has become a totem, a do-nothing, say-everything MP. 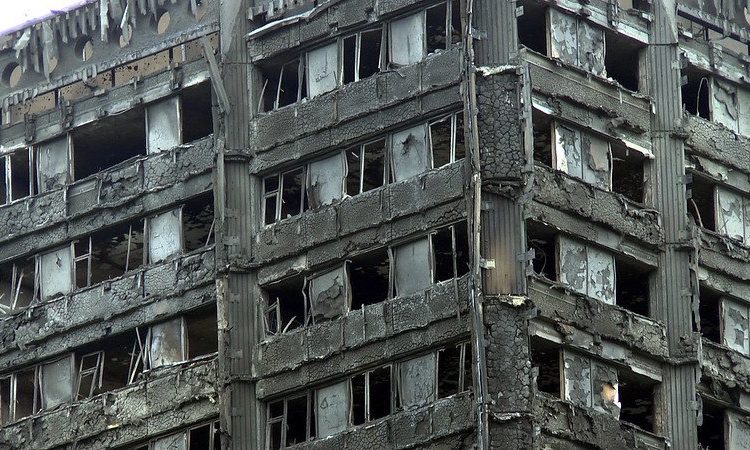 "Upper Grenfell Tower" by ChiralJon is licensed under CC BY 2.0

On 6 April, the specialist housing magazine, Inside Housing, reported that “three-quarters of cladding systems on new medium-rise buildings use combustible materials”. This was brought to a wider audience the following day by the MP for Helmsley, Jon Trickett, who tweeted that he was “Gobsmacked” about the report. Mr Trickett’s tweet received a couple of thousand retweets and best part of four thousand likes.

And then everything settles down and the issue becomes one of a thousand clamouring for our attention in a febrile atmosphere of national flags and covid passports and the prospect – or not – of foreign holidays.

The Inside Housing report cited 66 residential construction projects of between 11 and 18 metres in height and built during 2019 and 2020 that used rainscreen cladding; 51 used combustible materials.

The impact of Grenfell on cladding

Of course, following Grenfell, the government banned the use of combustible cladding on structures of at least 18 metres, the decision leaving rows over who should pay for the removal of existing cladding trailing in its wake. And now it is apparently calling for measures to “toughen up” existing legislation in order that buildings below 18 metres can also be made safer.

But the impression is that this is a government big on words yet slow to the point of negligence on actions.

As I wrote for Yorkshire Bylines in September last year, the original inquiry into the awful events of Grenfell Tower seemed steeped in efforts to obfuscate and pass the buck, all perfectly acceptable so long as none of the criticism stopped at Whitehall. Those who criticised the Grenfell inquiry seem to be being proved right.

New legislation is slow and inadequate, the continuing Grenfell examinations have bypassed government and are now mired in a blame game, while nepotism and a lack of transparency are muddying already pretty unclear waters. And away from Grenfell itself, where action is forthcoming the cost of reparation is being passed to homeowners.

The government have been slow to meet cladding demands

In short, it’s a mess. So how did we get where we are?

The government is pretty good at talking tough, and that tough talk is what makes newspaper headlines. Yet the lack of effective follow-through is rarely scrutinised. Government ministers increasingly behave with impunity, as recently noted by John Harris in The Guardian, safe in the knowledge that any criticism will remain in its own little bubble and will be unlikely to cut through to the public.

The secretary of state for housing, communities and local government, Robert Jenrick MP, is symptomatic of this whole malaise. Jenrick first came to prominence as a relatively unknown MP caught doing a deal with ex-porn mogul turned property developer Richard Desmond that appeared to go against the recommendations of the planning inspector and greatly allowed Mr Desmond to increase his profits.

Indeed at the time, there were calls for Jenrick to resign over his actions.

Jenrick is one of the more visible MPs, pontificating across news channels on vital issues such as flag flying, how ex-ministers should behave once leaving office, or how and when shops should open post-lockdown.

Jenrick has become a totem, a do-nothing, say-everything MP whose own misdemeanours have been shuffled into obscurity by a press only too willing to take everything a largely unchallenged government says at face value.

Inflammable cladding is still being sold within the construction industry

So, should we be, as Jon Trickett was, gobsmacked at the fact that inflammable cladding is still a material of choice within the construction industry?

Personally, I’m more gobsmacked at the lack of fight, the lack of a true opposition. This government blusters and pompously pronounces on everything and anything and then does very little to make or enforce laws that could affect real progress or bring about real change.

A Conservative government has, for the past 40-plus years, proclaimed a belief in small government. But small has now, despite the myriad claims to the contrary, become ineffectual. There is very little actual government, except that which uses public finances as a route to cronyism and self-enrichment. And while that’s the example, why should those in construction behave any differently?