Six of the likely candidates for PM work closely with the American libertarian right, who are expanding their influence in British politics 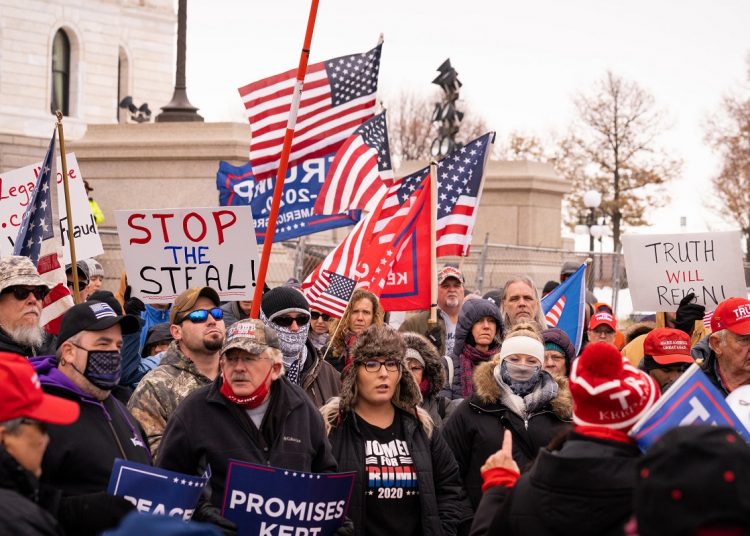 Stop the Steal protesters in America by Chad Davis on Flikr

On 7 July 2022, following yet another sordid scandal mishandled by Downing Street, and having squirmed his way through a parliamentary Liaison Committee in which he refused to confirm he would respect the outcome of a second vote of no confidence in his leadership, the Prime Minister finally agreed to resign … one day. Assuming Boris Johnson can be prised out of Downing Street, the scramble for the crown is on and contenders are declaring their intentions to stand. Of the ten likely candidates so far, six are known assets of the American libertarian right.

These candidates will have their war chests filled by the same interests who backed Donald Trump when he lost power in 2020 and who supported his claims that the election was stolen.

The same interests who put the conservative judges in the Supreme Court of the United States who have not only shocked the world with last month’s judgment over Roe vs Wade, but who plan to revisit the US election process potentially allowing individual states to nominate their electoral college candidate even if the popular vote went the other way, thus effectively negating democratic elections.

The same financial interests who are lining up to purchase large areas of the UK to convert into private cities, known as charter cities, which will operate outside the legal framework of the rest of Britain.

These funding interests are heavily invested in the fossil fuel industry, such as the Charles Koch Foundation and ExxonMobil, represented by trans-Atlantic think tanks such as the Heritage Foundation and the Institute of Economic Affairs (IEA), they form part of a global web of right wing libertarian think tanks called the Atlas Network.

Below is a résumé of the candidates for PM who are also members of what has become known as the Tufton Street Mafia.

Described by former government minister Sir Alan Duncan in his diaries as a “the turd”, and “a nut job who should be taken away by the men in white coats and certified as clinically insane”, Steve Baker was baptised by full immersion in the sea at Porthpean when he was 14. He describes his politics as ‘Christian Libertarianism’. When asked about his views on democracy in an interview for High Profiles, he declared that “God is a Libertarian as well as an absolute monarchist”. He concludes that we are not supposed to be living in a democratic system, rather “under God as King obeying his laws”.

In an interview this week about his leadership plans, he let his inner despot escape for long enough to announce that if he “seized power he’d do a good job”.

Formerly Minister of State for Trade Policy since 2021, Penny Mordaunt is heavily inspired by Margaret Thatcher. A member of the ERG in Tufton Street, she described the liberal left as “over-educated underachievers”.

In May of this year, she signed a memorandum of understanding with the American state of Indiana. She hopes this is the first of many agreements, and future targeted states in the pipeline are ultra-Conservative strongholds Oklahoma, North and South Carolina and Texas. Her Indiana agreement covers energy, advanced manufacturing, and pharmaceuticals.

In return she has offered up disadvantaged parts of the UK as ‘partners’ in a badly phrased word salad which leaves us none the wiser of her real intentions. She praised the IEA for coming up with the idea, though it has been largely mocked by trade experts such as Peter Ungphakorn as non-binding and essentially meaningless.

The first to go from the Cabinet, Sajid Javid set off the domino effect of resignations which ultimately toppled Johnson. In his heartfelt resignation speech to the House of Commons he portrayed himself as complete opposite of Johnson. A state-school-educated outsider; a loving husband, father and son.

That may be so, but as a long-term Eurosceptic he is also another Tufton Street acolyte, the Vote Leave favourite for the 2019 Conservative leadership bid whose campaign manager was the highly controversial Matthew Elliot. Elliot is a linchpin of the libertarian think tanks, the Legatum Institute and the Tax Payers Alliance, and is husband of Sarah, chair of Republicans Overseas. Sajid denied coining the nomenclature ‘The Javid’, but unfortunately someone did. 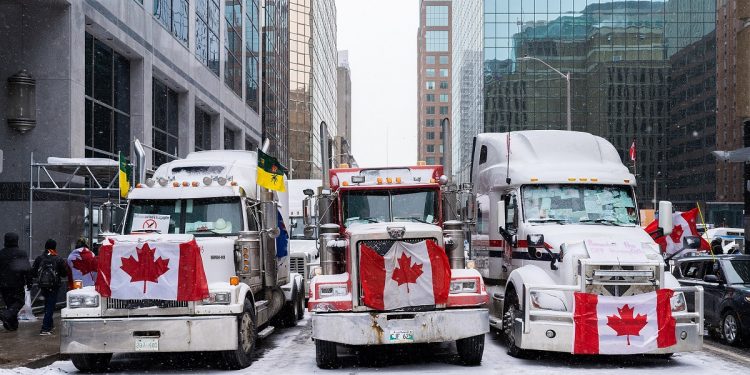 According to the Daily Express, Suella Braverman is described by colleagues as “Fu&*ing useless”. She is a member of the Triratna Order, a controversial religious sect founded by sexual predator Dennis Lingwood who went under the more exotic name of Sangharakshita until his death in 2018.

She was inexplicably promoted to attorney general in 2020. Although she describes herself as a premier league civil rights barrister and a government lawyer for the Guantámano Bay Inquiry, no one has been able to find any evidence of this.

Bizarrely for a lawyer she opposes judicial review and the Human Rights Act. A QC because the title comes with the job of attorney general, she didn’t earn it in her professional career. It’s thought her promotion was owing to her willingness to advise in contradiction to international law concerning the Northern Ireland Protocol. She is heavily involved in, and a former chair of Tufton Street’s ERG.

Being kind, one could describe Liz Truss as a political chameleon. Previously an anti-monarchist member of the Liberal Democrats, she went on to become a vocal Tory Remainer in the 2016 Brexit referendum. She has since morphed into a hard-right Eurosceptic Margaret Thatcher tribute act.

Replacing Liam Fox as trade secretary she held several meetings with the IEA. These talks were reclassified as personal discussions and removed from the transparency register in 2020, before an outcry forced her to reinstate them shortly afterwards.

Described by Dominic Cummings as “about as close to properly crackers as anybody I’ve ever met in parliament”, Truss has very close ties with Tufton Street. In 2020 she controversially appointed Mark Littlewood of the IEA and Mathew Kilcoyne of the Adam Smith Institute as official government advisers.

Despite being a clumsy media performer, she is tipped to be the ERG’s favourite candidate.

Married to the daughter of one of India’s richest men, Rishi Sunak has been nicknamed ‘The Maharaja of the Dales’. He met his future wife at Stanford University in California where he was under the mentorship of Paul Romer. The latter is evangelical about charter cities and freeports, and Sunak shares his enthusiasm.

He has ties to the Tufton Street based Centre for Policy Studies, a climate change denying think tank for which he wrote a report advocating Romer’s ideas. These ideas are now informing UK government policy and in March 2021 Sunak’s budget announced the creation of eight freeports in England.

Throwing himself in the ring as the ‘clean start’ candidate,  it’s well known that Tom Tugendhat and Johnson despise each other. But is a clean start a realistic promise?

In March 2019 he used the opportunity as chair of the select committee on foreign affairs to recommend to the House a report authored by James Kanagasooriam, and Vote Leave and Tufton Street veteran Matthew Elliot, called ‘Public opinion in the post Brexit era’. Elliot’s credentials in the Atlas Network  are well documented. Kanagasooriam is head of a data analytics firm and, like Tugendhat, a board member of the right-wing think tank Onward.

In April 2020, the Financial Times reported that senior Tories were launching an ERG-style group, named the China Research  Group (CRG) headed by Tugendhat and Neil O’Brien. The latter was previously director of Tufton Street’s Policy Exchange, with whom Tugendhat has very close links. Tugendhat appears regularly in video conferences and frequently authors reports for Policy Exchange.

His role in the CRG has resulted in him being sanctioned by China, who accused him of spreading misinformation. The CRG is closely linked with trans-Atlantic think tank Inter Parliamentary Alliance on China and the Council on Geostrategy. This latter think tank was launched in 2021 by James Rogers and Viktoria Starych-Samoulien, both of whom previously worked for the neo-conservative trans-Atlantic think tank, the Henry Jackson Society. Tugendhat is a sitting member of its council.

With his involvement in this, the CRG, Onward and the Policy Exchange, he can be firmly placed in organisations at the heart of the Atlas Network. Whatever Tugendhat’s premiership might offer, a clean start from the ever-increasing influence of trans-Atlantic right wing libertarianism it would not be.

Following Johnson’s 2019 victory, more than a dozen former staff members from different Tufton Street think tanks were allocated influential special adviser roles and 14 IEA alumni were serving in the Cabinet. As Johnson looks on from inside Downing Street, the forthcoming leadership contest will be more than a battle for the role of prime minister, it will also be a fight for the soul of our nation.