In March 2015, when the referendum was still a dot on the horizon, Open Europe produced an estimate of the alleged total savings if we scrapped the top 100 costliest EU rules based on an 'analysis' of government impact assessments. It was a fantasy. 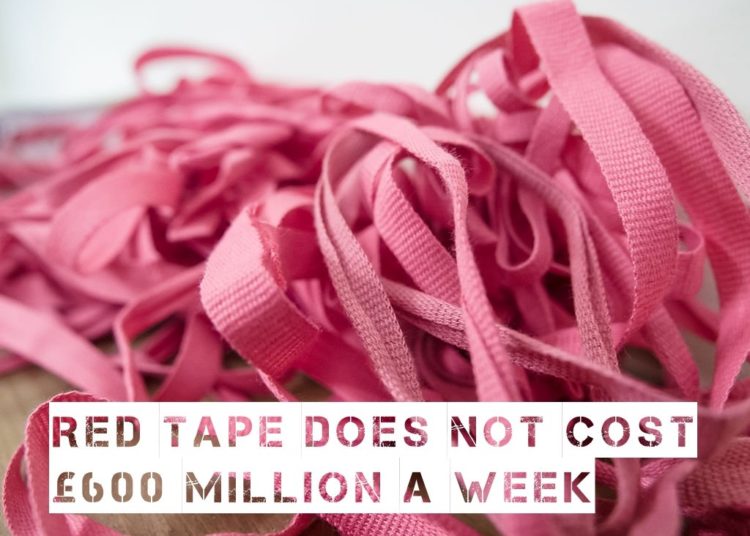 Before the referendum, figures about the cost or benefit of EU membership were dropped like cluster bombs by both sides until everybody was completely shell shocked and confused. The one that resonated and stuck was the £350m a week painted on the side of the red bus. It was perhaps the most famous but it certainly wasn’t the most mendacious.

That title surely belongs to the claim that the cost to British business of EU regulations was a staggering £600m a week in red tape. High-impact numbers like these are not plucked out of thin air. To be believable they need a loose connection with the truth and to come from a semi-reputable source.

Here we enter the realm of the think tank.

Some have been around a long time and are highly regarded. For example, The Fabian Society (1884) or the Institute of Fiscal Studies (1965); both are widely respected. Others are more like pop-up versions, masquerading as neutral and independent bodies but with an agenda to influence public opinion on behalf of wealthy backers.

So, where did the £600m a week come from – and was it reasonable? Lord Bilimoria, the British Indian peer who founded Cobra beer, asked the same question:

“Vote Leave says EU regulations cost British businesses £600 million a week. Where has this figure come from? It is completely subjective to try to quantify the impact of red tape. The claims are made by people who have never run a business in their life. Of course there are unpopular regulations, but there are good regulations that protect workers’ rights”

The answer is that it came from Open Europe, set up in 2005 and described on Wikipedia as centre-right and eurosceptic. It folded in February this year and is now part of Policy Exchange, another shadowy think tank.

You might want to read this article in The Economist from March 2010 about how Open Europe operated to spoon-feed lazy journalists. The article claimed well over half the stories in the British press at that time were triggered by Open Europe, many of which were “one-sided, inaccurate and verging on the hysterical … playing fast and loose with complicated sets of data”.

“But I think people in Brussels ignore at their peril the impact of a small, but assiduous Eurosceptic campaign group, Open Europe. Calling itself an independent think tank, which it is not, Open Europe does two exceedingly clever things to influence British press coverage of Europe. Its (admirably multi-national) team of young researchers reads the English-language, French, Dutch, Belgian, German and Nordic press every day, and translates and links to stories that show the EU in a bad light, in a daily press summary that has very wide circulation among political reporters”

The Economist cites this Open Europe inspired article from The Daily Mail, also in March 2010, suggesting that EU regulations had “cost Britain £176 billion since 1998 – equivalent to this year’s annual budget deficit” in a completely ludicrous apples and oranges comparison.

In March 2015, when the referendum was still a dot on the horizon, Open Europe produced an estimate of the alleged total savings if we scrapped the top 100 costliest EU rules based on an ‘analysis’ of government impact assessments. They said the total was £33.3bn a year in 2014 prices. The press duly, and eagerly, grabbed the £640m a week and the illusion was born. These were the top five:

Boris Johnson used the £33 billion figure in a Telegraph column in May 2016 and Richard Drax, another Brexiteer MP, used it on his website to encourage the leave vote in his constituency. It was ideal for influencing voters through both pro and anti-Brexit media. The Daily Express was still using it as recently as August 2019.

The Open Europe web page containing the £33bn figure has been taken down, perhaps for reasons that will become clear in a minute, but you can see an archived copy of it.

So, we know where it came from, but is it correct?

The answer is no, it isn’t. Full facts partly debunked it in April 2016 by saying only £12.8bn of the purported saving was “politically feasible”. We would lose benefits of £4.3bn to business and the public sector but we would still be £8.5bn better off. But this was still wrong.

The real debunking came from a much more unlikely source albeit not until after the figure had done its job. Change Britain was a pressure group set up by the successful Vote Leave campaign following the referendum. CB were not remainers by a long chalk, in fact the exact opposite. In December 2016, they published a report claiming that leaving the single market and customs union could save us £450 million a week (it’s always a week isn’t it?) from three sources: (a) not contributing to the EU budget (b) scrapping burdensome single market rules and (c) the impact on exports after leaving the customs union.

A former chief economist at the Cabinet Office, Jonathan Portes, said the figure was adding together supposed savings that could not be compared. “Adding increased exports and reduced government expenditure is literally meaningless. The results mean nothing. It isn’t research, it’s junk,” he said.

This is probably the reason the web page was taken down a long time ago. Although parts of the site have been archived, the one calculating the £450 million a week isn’t one of them. Fortunately, I saved a personal copy of it in PDF format.

Change Britain took Open Europe’s supposed ‘savings’ from scrapping ‘burdensome’ regulations of March 2015 and concluded that most of them would never actually materialise, either because they were international obligations that we would still need to abide by or the items had not been highlighted in the government’s red tape review.

They concluded the true savings were not in fact £33bn but a bit less, actually £1.2bn. Quite a difference, eh?

But that’s not all. £1.058bn (of the £1.2bn) came from scrapping the 1998 Data Protection Act and presumably replacing it with nothing. Further, another £1.303 billion of savings were supposed to come from scrapping the 2008 Motor Vehicles (Type Approval) (Amendment) Regulations. These are from the UNECE (United Nations Economic Commission for Europe) and in or out of the EU they would still bind us. So no saving there either.

But that doesn’t matter now does it? The £600m a week has done everything expected of it and has now disappeared into history along with Open Europe, which existed just long enough to get us out of the EU.

You can be sure there are no great savings to be made from cutting EU red tape. In fact with 50,000 more customs agents and border officials we are likely to see a mountain of new red tape, needlessly ADDING billions to our costs.

Now the weird thing about Open Europe is that in March 2010, City AM were reporting that Marks and Spencer chairperson Sir Stuart Rose, the man who in October 2015 was appointed chair of Britain Stronger in Europe, the official remain campaign in the 2016 referendum, actually supported Open Europe.

Incidentally, the City AM page has also disappeared but an archived copy is available.

No wonder the Remain side lost.